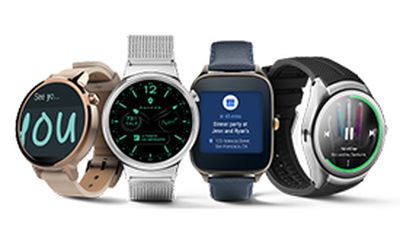 The first Android Wear 2.0 smartwatches will launch in the first quarter of next year, according to Android Wear product manager Jeff Chang, who took part in an exclusive interview with The Verge.

The two new flagship models will not have Google or Pixel branding, but rather branding from the undisclosed company manufacturing them—so one of Asus, Huawei, LG, Motorola, or a few other brands.

Following the launch of the two new smartwatches, the Android Wear 2.0 update will be pushed out for some, but not all, existing Android Wear watches:

Following the launch of Google's two flagship models, other vendors will release new Android Wear 2.0 smartwatches throughout 2017. The first Android 2.0 smartwatches are expected to be announced at CES in the first week of January. Other product unveilings will follow at the Baselworld trade show later in 2017.

The new Android Wear smartwatches will compete with the Apple Watch, which remains the best-selling smartwatch following the launch of new Series 2 models in September. Google also faces competition from Samsung, which runs its own Tizen software on its smartwatches rather than Android Wear.

Android Wear 2.0 will support native, standalone apps that do not require a paired smartphone to work, in addition to Android Pay and Google Assistant. The new version will also feature Apple Watch-like complications on watch faces and a Material Design makeover. The final developer preview will be released in January.

dumastudetto
Android Wear is already a dead platform. I'm all in on Apple Watch, as are the devs.
Score: 13 Votes (Like | Disagree)

I would love a round Apple Watch. Not a nerdy square 80ies style Apple Watch. Apple should offer both versions.
Score: 13 Votes (Like | Disagree)

Yes! Android wear for the win! Call me when Apple finally designs a round Apple watch.

Nobody wants a round Apple Watch. The current design is pure perfection.
Score: 11 Votes (Like | Disagree)

A power hungry young guy at Apple will copy some part of this, and Tim will praise him. Next year, young guy will possibly try recommending something else, and get another praise. Then their head will swell, and they leave to start their own company. Years later, they are a janitor, wondering what went wrong.

I want circular design, and I am not alone who don't like ugly square box on the wrist. That was the main reason why I still haven't even thought about purchase of Apple Watch.
Score: 9 Votes (Like | Disagree)
Read All Comments