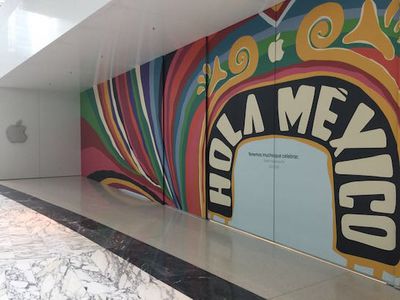 Reforma Gadgets via Twitter
Apple is celebrating the opening of its first Mexican store with a colorful Hola México banner and a matching construction barrier at Via Santa Fe, the upscale wing of Centro Santa Fe, the largest shopping mall in Latin America. The store, first rumored in January, will be located on the upper level of the shopping mall.

September is shaping up to be a busy month for Apple retail, starting with two U.S. stores that reopened on September 2, another four locations reopening on September 10, and three more to follow on September 16.

As a US company, it seems really weird to me that it took Apple so long to open a location in Mexico. I feel like you'd go to Mexico before a lot of the European countries that Apple is already in...

It's about revenue, not proximity.
Score: 4 Votes (Like | Disagree)

It's about revenue, not proximity.

As Apple is finding in India, sometimes it has nothing to do with revenue or proximity. Regulations and protectionism sometimes are the reasons why one market takes longer than another.
Score: 3 Votes (Like | Disagree)

This should stop people from illegally sneaking over the border and stealing Genius jobs.

drumcat
We'll make 'em build an Apple store, and make them pay for it, too!
Score: 1 Votes (Like | Disagree)