The photos originated from mobile peripheral website Topp Ten, which claimed that in addition to the usual color options of Rose Gold, Gold, and Silver, Apple will offer the new iPhone in a variant of Blue. This resurfaces a rumor from earlier in the summer, which was believed to ultimately be a mistake and that this "Deep Blue" iPhone 7 is actually just a new shade of Space Gray. 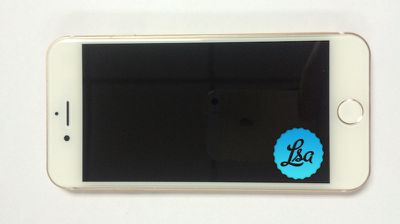 The two iPhones in today's images are both Gold, so any claim to the veracity of a potential Deep Blue iPhone 7 is still left unconfirmed. The photos provide direct glimpses of the iPhone's front and rear sides, although it's difficult to directly confirm if the devices have a traditional, tactile home button instead of the rumored addition of a flush, Force Touch-enabled alternative, although as dummy units they wouldn't necessarily confirm any changes to the device's functionality.

Since the 2016 iPhone update will otherwise be modest, it's believed subtle changes to the line's longest-living features, like a potential shift in how the Home Button looks and functions, could be an attractive selling point for customers.

The back of the iPhone shows off what's expected of the device at this point, namely the single-lens camera of the 4.7-inch iPhone 7 and the dual-lens alternative on the 5.5-inch iPhone 7 Plus. Previous reports have suggested that Apple could be splitting the iPhone lineup this year into three tiers, with an "iPhone 7 Pro" housing the dual-lens camera and other top-tier features, but today's images showcase only two options.

The rear of the iPhone 7 Plus also doesn't have a Smart Connector, which was suggested earlier in the year to be a potential added-in feature on the larger model. More recently, however, it was reported that Apple has since ditched these plans, and subsequent image leaks and molds for the 5.5-inch iPhone 7 have lacked the Smart Connector on the lower backside of the smartphone's casing. It was never clear what the benefits of a Smart Connector could bring to the iPhone, besides the potential possibility of fueling wireless charging or battery cases.

Otherwise, the photos back up everything else that's expected in the iPhone 7 this year: realigned antenna bands, tapered camera enclosures, and an overall design that keeps a very close resemblance to the iPhone 6 and iPhone 6s. What's not shown directly is any side of the iPhone 7, so it can't be confirmed if the new images back up the rumored lack of a 3.5 mm headphone jack. Still, at this point and with a steady stream of other accessory leaks and videos, that's one of the likeliest rumors out there surrounding the 2016 iPhone.

It's currently believed that Apple will hold its media event debuting the iPhone 7 on September 7, with pre-orders kicking off on September 9, and a wide launch of the smartphones on September 16.

LowellFan09
This is terrible compared to older generations.
Score: 34 Votes (Like | Disagree)

Burger Thing
I find it hilarious that some peeps here are justifying the removal of the headphone jack in Ive's attempt to make the phone a fraction of millimetres thinner - but approve a design with bezels as big as a house.

While I like the iPhone and iOS in general, that design looked dated and tired 2 years ago already.
Score: 34 Votes (Like | Disagree)

chriscrk
I think Apple pushes these leaks on us so much in order to avoid the shock of how ugly the phone is.

I used to find the dual camera design horrible, but seeing it so much, I've grown to... like it?!
Score: 27 Votes (Like | Disagree)

I think Apple pushes these leaks on us so much in order to avoid the shock of how ugly the phone is.

I used to find the dual camera design horrible, but seeing it so much, I've grown to... like it?!

They look pretty good. Fake or not, I'm digging the design. I use the apple leather case so how the phone looks at the back doesnt really affect me. I just want those ugly bezels to shrink a bit with a better screen (hoping for 2k on the plus).

Im also starting to like that camera bump. The iPhone 6/s camera seems to be a seperate component, but this looks more natural and apart of the enclosure. Honestly, it might not be the best of upgrades, but ill take it. As one of the first commenters stated, i do think these are purposely done by Apple to make us get over the changes. Who knows. Its getting closer to the date though. Nek minute the unboxing videos!


What Apple has managed well with these leaks in recent years is to control the 5 stages of grief with early leaks of all the ugly/boring "features" such as camera bumps, antenna bands, same old colour options etc. -

1. Denial: "That can't be the iPhone 7, you'll see when it comes out, obviously a render! Fools!"

3. Bargaining: "It'll be ok as long as they put a bigger battery in it, if they make it thicker and remove the bump..."

4. Depression: "It looks like this is it, may as well keep my iPhone 5 for another year, Apple are nothing without Jobs"

5. Acceptance: "Ah well, it's not that bad, the camera will be better and the new processor will be faster, it's ok!"
Score: 15 Votes (Like | Disagree)

I really want to cry.

That's why this new iPhone will be completely waterproof.
Score: 13 Votes (Like | Disagree)
Read All Comments