Over the past few weeks, images have claimed to show Apple's upcoming Lightning-enabled EarPods, but most were found to be fake as the design language of the headphones largely deviated from Apple's usual aesthetic, especially in regards to not having a thin, rectangular Lightning plug. Today, MobileFun posted a video of a working pair of Lightning EarPods, and the overall look of the accessory appears more in line with Apple's design than any of the previous leaks. 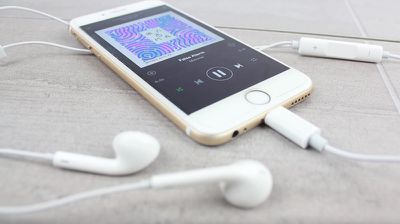 As is expected, the headphone part of the new EarPods is structured the same as the EarPods currently being sold by Apple, with a clean, white design, right and left markers on each earpiece, and in-line volume and play/pause controls. Interestingly, the in-line controls are placed farther down on the EarPods, directly below the right/left split in the cable design. If real, this would mark a design change from the current generation, which places the volume rocker along the right cable, above the bifurcation in the cord.

The most notable part is, of course, the long-rumored addition of the Lightning plug onto the EarPods, adapted to take advantage of the removal of the 3.5 mm headphone jack from the iPhone 7 and iPhone 7 Plus. The plug on the Lightning-enabled EarPods appears slightly bigger than Apple's traditional Lightning adapters thanks to the inclusion of a digital-to-analog converter needed for music playback and not just straightforward charging.


In the video, the EarPods are proven to be completely functional through the playing of a few songs as well as using the in-line controls to play, pause, and skip some tracks. MobileFun concluded to its viewers, "as you can see, these are fully working, they aren't just a mock-up of what you might receive," believing that the working headphones will be what Apple sells alongside the new generation of iPhone in September.

Multiple solutions for the removal of the 3.5 mm headphone jack have sprouted up over the past few weeks, with one of the most prevailing alternatives centering around a Lightning to 3.5 mm dongle that the company could potentially bundle into the box of the iPhone 7 and iPhone 7 Plus to cushion the transition for customers. More recently, it was reported that Apple could be working on completely wireless "AirPods" as an option for iPhone users, allowing simultaneous iPhone charging and headphone music playback, which is one of the most commonly occurring grievances surrounding the loss of the 3.5 mm headphone jack.

Previous Coverage: Lightning Headphones: Are They Better or Just an Inconvenience?

yesjam
I've been firmly on the fence about everything we've heard about the iPhone 7. As a musician, I place a fairly high priority on being unencumbered in listening to material on my phone. It is looking like it's increasingly likely that the use of the lightning port for headphones will not be mated to a method of charging by some other non-lightning means.

That's simply infuriating to me. And - get this - it's actually a deal breaker. I know, so many talk the talk about abandoning the iPhone, but I am willing to walk the walk. I will wait until the iPhone 7's official announcement before finalizing my decision, but since my contract's expiring this fall, I'm fully anticipating purchasing a Nexus device instead of a new iPhone. Further, the 6P is $0 from my phone provider; I'll save a couple of hundred bucks in the process.

Shame on you, Apple! While you may think the elimination of the 3.5mm jack is innovation or progress, I only see a reversion to the pre-smartphone era of awful proprietary earbuds bundled with flip phones. Except you could charge and listen simultaneously with those.
Score: 76 Votes (Like | Disagree)

Millions of people have spent good money on high quality headphones and earbuds that use the 3.5mm standard to be left out in the cold.

There have been almost a half dozen articles posted over the past few weeks that talk about the rumor of Apple removing the 3.5mm jack. If you look at those articles, the numbers of posts are astounding, more than most other articles, and the vast majority of reader responses are from people angry about the potential removal of the 3.5mm jack.

We are not talking about simply upgrading from floppy disks to CDs, from CDs to USB sticks, etc. I know people love to compare removing the 3.5mm jack to eliminating the floppy or CD drives. We are talking about the total elimination of one of the most reliable and useful audio standards that virtually all manufactures embrace.

Apple will take this proven and reliable open standard and give us their proprietary standard, and I'm confident no other equipment manufacture will ever embrace Lightning (No I'm not talking about headset manufactures, I'm talking about other desktop, laptop, tablet, phone, automobile, and aircraft manufactures).

So Apple does not move us forward, they lock us into a standard they control/own and move us away from the mainstream into a segregated solution that is not even available on their own computer line ... which uses the 3.5mm audio jack.

I think Apple's cult like mantra of making their phones thinner and thinner will go too far with the elimination of the 3.5mm jack.
Score: 75 Votes (Like | Disagree)

Krizoitz
If Apple really does ditch the standard audio jack its going to go down as the biggest mistake the company made since the round puck mouse. There is literally no upside to this. I don't need my phone to be one more mm thinner. I need it to have a better battery. Its small enough as is (actually the screens are too big, 4.5" would have been better than 4.7"). *sigh*
Score: 51 Votes (Like | Disagree)

magicschoolbus
So cool! Now i can't charge my phone and listen to headphones at the same time! What a fantastic innovation!
Score: 25 Votes (Like | Disagree)

So, is it even possible to charge while listening to music or watching video?

KingOfStuff
pretty sure you can have lossless audio from any headphone jack...
Score: 22 Votes (Like | Disagree)
Read All Comments