Chinese smartphone repair shop Rock Fix recently shared photos of alleged iPhone 7 components on microblogging service Weibo, potentially including dual-SIM trays that would allow for the smartphone to send and receive calls and messages from multiple phone numbers (via Engadget). 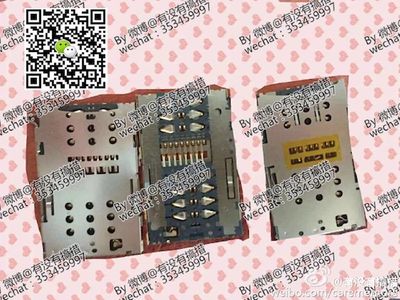 Dual SIM technology would also enable iPhone 7 users to use multiple carriers based upon network coverage, pricing, and other competitive differences. A customer in the United States, for example, might elect to use AT&T for nationwide voice and text messaging and T-Mobile for cheaper and unlimited 4G LTE data.

Dual SIM support would differ slightly from the Apple SIM, which allows cellular iPad users to easily switch between different short-term data plans from select carrier partners using one SIM card. The Apple SIM is particularly useful for traveling abroad, with coverage in more than 90 countries and territories.

Rock Fix turns out to be the same source of a previously leaked Lightning cable assembly for the iPhone 7 that retains a 3.5mm headphone jack, despite widespread rumors claiming that Apple will switch exclusively to Lightning and Bluetooth audio output for wired and wireless headphones respectively.

The smartphone repair shop shared further pictures of the aforementioned Lighting cable assembly alongside purported images of a dual-lens camera and 256GB SanDisk flash storage appropriate for the iPhone 7 series. There are also a trio of display components that may be from early prototyping stages.

Apple is expected to announce the iPhone 7 series in September. The smartphones are expected to retain iPhone 6s-like designs with faster Apple A10 processors, dustproofing and waterproofing, repositioned antenna bands, and faster LTE and Wi-Fi. A dual-lens camera and 3GB of RAM may be exclusive to the 5.5-inch model.

The addition of a Smart Connector, stereo speakers, a touch-sensitive Home button, and a new Deep Blue color option have also been rumored, but it is not entirely clear which features are destined for the iPhone 7 series, no longer planned, or reserved for the alleged OLED-based iPhone with glass casing in 2017.

ProjectManager101
One number for your wife, another for the mistress. There is a market for that.
Score: 14 Votes (Like | Disagree)

Jsameds
I thought Apple were supposedly getting rid of SIM cards?
[doublepost=1466435082][/doublepost]

You would figure by now apple would finally put a damn micro SD slot in the phones, but...

Slow, unreliable and insecure storage. No thanks.
Score: 8 Votes (Like | Disagree)

penajmz
Rumors are all over the place this time a round! :eek:

I personally wouldn't care for this.... I don't want two phone bills. Thanks!
Score: 7 Votes (Like | Disagree)

Rumors are all over the place this time a round! :eek:

I personally wouldn't care for this.... I don't want two phone bills. Thanks!

I would depending on how it works, it would be nice to not have to carry both my personal and work phone around. Having both on one phone but being able to turn off or put to sleep the work phone when needed would be key.
Score: 7 Votes (Like | Disagree)
Read All Comments