Apple is planning to remove the 3.5mm headphone jack on the next-generation iPhone in favor of an all-in-one Lightning connector, according to often-reliable Japanese website Mac Otakara. Apple may also release Lightning-equipped EarPods to support the new audio output on future iOS devices. 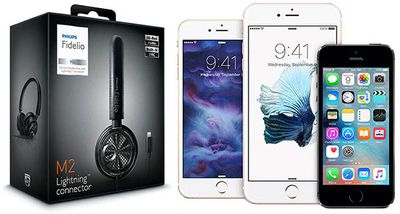 The report, citing a "reliable source," claims the new same-sized Lightning connector will support Lightning-equipped and Bluetooth headphones, and have a DAC, or digital-to-audio converter, for backwards compatibility with wired headphones using standard 3.5mm stereo jacks. A 3.5mm to Lightning adapter would be required.

The so-called "iPhone 7" will likely be more than 1mm thinner than the 7.1mm thick iPhone 6s as a result, according to the report. The sixth-generation iPod touch could be a comparable device, with a depth of 6.1mm, but the portable media player still has a 3.5mm headphone jack.

Apple will also reportedly release Lightning-equipped EarPods, which would likely be included in the box alongside the iPhone 7 and sold separately for use with other future iOS devices. Apple's current EarPods with a 3.5mm stereo jack will presumably remain available for purchase afterwards for the foreseeable future.

Apple introduced new MFi Program specifications in June 2014 that allow third-party manufacturers to create headphones that connect to iOS devices via a Lightning cable, but the rollout has been slow. Philips has unveiled Lightning-equipped Fidelio M2L and Fidelio NC1L headphones over the past 14 months.

Should this rumor prove to be true, Apple's decision to switch to an all-in-one Lightning connector for charging and audio output could face the same kind of controversy as when the company retired its proprietary 30-pin dock connector in favor of a smaller Lightning connector starting with the iPhone 5 in 2012.

Reminder that it's the 3.5 mm headphone jack that's the sole reason the iPhone is so thick.

sniffies
... and render all other headphones useless (unless you buy a $200 adapter from Apple). Thanks, Taylor.
Score: 94 Votes (Like | Disagree)

farewelwilliams
do you wanna charge? or do you wanna listen to Apple Music?
Score: 90 Votes (Like | Disagree)

Reminder that it's the 3.5 mm headphone jack that's the sole reason the iPhone is so thick.

As stated, the iPod is thinner and has a headphone jack.
Score: 75 Votes (Like | Disagree)

the so-called "iPhone 7" will likely be more than 1mm thinner than the 7.1mm thick iPhone 6s as a result, according to the report. The sixth-generation iPod touch could be a comparable device, with a depth of 6.1mm, but the portable media player still has a 3.5mm headphone jack.

....thinner? any thinner and i'll lose it into the time-space continuum forever
Score: 72 Votes (Like | Disagree)
Read All Comments

Friday December 2, 2022 10:54 am PST by Juli Clover
Google is continuing on with its attempt to convince Apple to adopt the RCS messaging standard, publishing a new "it's time for RCS" blog post. Promoted heavily by Google, RCS or Rich Communication Services is a messaging standard that is designed to replace the current SMS messaging standard. It provides support for higher resolution photos and videos, audio messages, and bigger file sizes, ...
Read Full Article • 661 comments