According to a recent report from Taiwan's Commercial Times, via EE Times and a separate research report from KGI Securities' Ming-Chi Kuo, Taiwan-based TSMC may have won sole production rights on the A10 chip slated for the next-generation iPhone 7.

This is in contrast to the split production of the A9 processor between Samsung and TSMC featured in the iPhone 6s and iPhone 6s Plus. Apple's decision to revert back to TSMC as a single supplier, as was seen in A8 chip production, could be motivated by advanced device packaging techniques offered by TSMC that may not have equivalents in Samsung's packaging offerings.

The Commercial Times report mentions TSMC's integrated fan-out wafer-level packaging (InFO WLP) technology as one of the key inclusions in the production contract. InFO WLP is one of many competing 3D IC technologies that promise higher levels of component integration in a single package with better electrical characteristics.

Among those improvements is the possibility for higher-width memory buses that support lower-power operation necessary for mobile devices, which for consumers means better performance and efficiency. 3D IC technologies are just beginning to emerge in the consumer space, with AMD's use of High Bandwidth Memory (HBM) in its Fiji XT line of discrete graphics cards being one of the first implementations.

According to a paper abstract from TSMC engineers, InFO WLP also allows for better thermal performance as well as superior performance for radio frequency (RF) components such as cellular modems. We reported last year about Apple hiring more engineers to potentially bring RF component development in house, so this packaging technology could serve as additional motivation to Apple for packaging in the future. Even if Samsung could offer Apple a comparable technology, the challenges of verifying a design on two new manufacturing flows may be a motivating factor for Apple to stick with one supplier for its next processor.

In the near term, the thermal advantages and potential increased memory bandwidth are the more immediate sources of improvement for Apple's potential next chip. Many 3D IC technologies have seen slow adoption due to increased costs and processing steps, but the simpler InFO WLP technology offers an easier, cheaper entry point for Apple, which also has the luxury of uncommonly high margins on its devices. 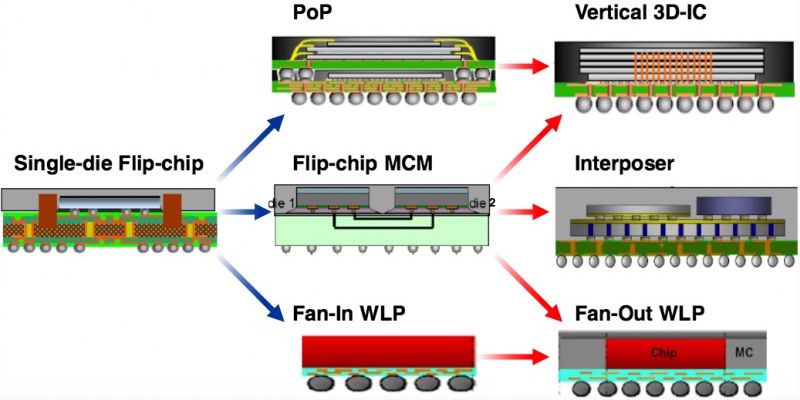 TSMC's InFO WLP differs from many competing 3D IC solutions in that it does not require an additional silicon interposer along with the existing package substrate used for component integration. Though they do not feature active components, silicon interposers are made on silicon wafers just like the application processors featured in mobile devices, making them a costly addition to the device assembly.

InFO WLP allows multiple flip chip components to be placed side-by-side on a package substrate resembling a traditional assembly, but with the ability to interconnect to one another through the package substrate. This is in contrast to traditional methods which feature stacked packages (package on package, or PoP) interconnected with tiny wires. As mobile memory technologies advance, with LPDDR4 being the latest iteration, electrical signaling becomes an increasing technological challenge which begins to make 3D IC technologies more attractive for enhanced performance.

The list of included components would not be limited to memory, however, so future device teardowns will be interesting as mobile devices begin to include these technologies. More information on TSMC's packaging technologies can be accessed via this PDF.

Erm, what does this all mean exactly...?! I suspect this simply means: "It's better-er-er than the current one." :-|

happyslayer
Having been an engineer, (now a computer consultant) it's nice to see the occasional super-techy article on MacRumors. Admittedly, I didn't understand all of it, but it made me tab out and go research some of the terminology. Good article!
Rating: 15 Votes

There was no chipgate in the first place.

But there's lots of gates on the chips!

(That was for you semiconductor engineers...)
(I'm here all week folks...)
Rating: 14 Votes

This is great news.

Finally, we can look forward to iPhones that all have the same battery life, as opposed to the current iPhone 6s, which has battery life that can be as much as two hours shorter if you are afflicted with the Samsung chip.


There was no "chipgate" and no issue. To really understand that though, you would need to be an engineer. The fact the many aren't, and really don't understand the underlying technology, manufacturing, second-sourcing of components, semiconductor processes, tolerances, etc, is evident, and is what ultimately froths up the tech media and its readers.
Rating: 9 Votes

I prefer they not use Samsung parts. One can only speculate at the quality of Samsung chips being sold to Apple. A company that Samsung views as a competitor.

One does not need to speculate. Apple is a customer for Samsung. They are only a competitor for the mobile phones division.

So perhaps it's time to stop with these silly speculations, especially seeing how Apple has now produced 9 generations of iPhones with Samsung-supplied parts without any indications that the parts did not live up to Apple's quality requirements. One could speculate that Apple executives are not actually as dumb as people here think.
Rating: 8 Votes

Chytin
Translation: no chipgate when the iPhone 7 launches.
Rating: 6 Votes

Translation: no chipgate when the iPhone 7 launches.


There was no chipgate in the first place.
Rating: 5 Votes

reyalP
I prefer they not use Samsung parts. One can only speculate at the quality of Samsung chips being sold to Apple. A company that Samsung views as a competitor.
Rating: 5 Votes

One does not need to speculate. Apple is a customer for Samsung. They are only a competitor for the mobile phones division.

So perhaps it's time to stop with these silly speculations, especially seeing how Apple has now produced 9 generations of iPhones with Samsung-supplied parts without any indications that the parts did not live up to Apple's quality requirements. One could speculate that Apple executives are not actually as dumb as people here think.


Your reasonable, rational and sound thought processes are annoying.

...to the minds that spend their free time watching the Kardashians and all other manner of reality television. :-)
Rating: 4 Votes

Very much hoping this is true as I'm a shareholder in


Please use your power as a shareholder to insist they update their logo to something that no longer looks like it's come from a 1970's TV sci-fi show
Rating: 4 Votes