SanDisk's 256GB Flash Storage is Possible Option for iPhone 7 Plus

Following a rumor that Apple may sell an iPhone 7 Plus with 256GB storage, Italian website HDblog has shared pictures of a SanDisk 256GB NAND flash memory chip that could be appropriate for the next-generation smartphone. 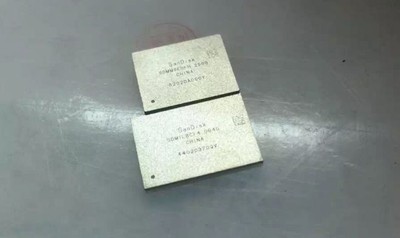 SanDisk's 256GB NAND flash chip (top) and older 64GB chip (bottom)
Apple has used SanDisk flash memory chips in a number of previous iPhone models, including the iPhone 5, iPhone 6, and iPhone 6 Plus, while other models have used NAND flash chips from Samsung, SK Hynix, and Toshiba.

SanDisk has managed to reduce the size of its 256GB flash memory chip to be smaller than its 64GB counterpart, which makes it a viable option given rumors that the iPhone 7 lineup could be up to 1mm thinner with a larger 3,100 mAh battery.

It remains unclear if the iPhone 7 Plus will still have 16GB base storage, which has been a highly contested option in recent years, or if Apple will opt for larger storage sizes such as 32GB, 128GB, and 256GB at existing price points.

It would be nice if they phase out 16GB. 64GB should be the minimum with new tech.

mountain
It would be nice if they phase out 16GB. 64GB should be the minimum with new tech.
Score: 31 Votes (Like | Disagree)

LordQ
Why are they seem to be throwing the best stuff to the Plus model? The only difference between the 7 and 7s should be the screen size!
Score: 25 Votes (Like | Disagree)

meaning-matters
I hope for audience booing if there's 16GB in Monday's iPhone.
Score: 22 Votes (Like | Disagree)

being an apple fan, I still find it funny each year when people joke about the possibility of the new iPhone still having 16gb as base storage lol

It's just a shame that joke's been accurate since the 3GS :(
Score: 20 Votes (Like | Disagree)
Read All Comments