Apple and Tesla have been battling to recruit top talent from each other, according to a new report from Bloomberg Business. Tesla has hired at least 150 former Apple employees, more than they have from any other company. 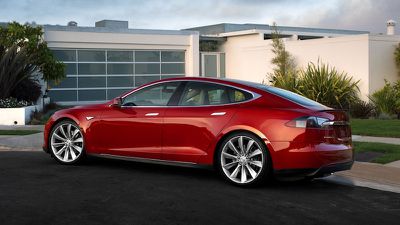 The company has hired at least 150 former Apple employees, more than from any other company, even carmakers. The former Apple staffers work in many areas of the 6,000-employee automaker, including engineering and law. “From a design philosophy, [Apple] is relatively closely aligned,” says Musk, Tesla’s co-founder and chief executive officer. Apple declined to comment for this story.

Former Apple employees say their decision to join Tesla was based on the company's electric cars and CEO Elon Musk, who is a similar figure to Jobs. Like Jobs, Musk pays a great deal of attention to the details of his products and is a strong, visionary leader. Musk reportedly has a soft spot for Apple and enjoys comparisons to Steve Jobs as well, one former Tesla employee tells Bloomberg.

Apple's influence can be felt in the 17-inch touchscreen installed in Tesla's cars as well as its retail stores, both of which had former Apple employees in key roles. High profile former Apple employees at Tesla include Doug Field, Apple's former VP of Mac Hardware Engineering, who leads new vehicle development at the car company. Using top Silicon Valley talent, like former employees at Apple, allows Tesla to get a leg-up on competitors in the automobile industry.

While Tesla has had success recruiting talent from Apple, Musk says that Apple has hired "very few people" from the car company despite offering $250,000 signing bonuses and 60 percent salary increases to its employees.

Apple and Tesla have interacted in the past, with a report emerging in February 2014 that Apple had considered purchasing Tesla. Musk also revealed the two companies have had "conversations", though it isn't known whether those were about a potential acquisition, iOS integration in Tesla cars or battery technology.

The report also provides an interesting look into other ways Apple has influenced one of the most talked about companies in Silicon Valley and is worth reading at Bloomberg Business.

KylePowers
Still waiting for Apple and Tesla to fight over me :(
Score: 52 Votes (Like | Disagree)

Tesla is a niche+vaporware quite unknown brand.

Seriously? Do you think the world ends in Alaska or what? So you're saying me that if we select random people from all over the world, both sex and all the age ranges, Tesla will be a commonly recognized and positively considered brand? You have to be joking. Do your mothers even know what Tesla is or recognize its emblem?

Strongest car brands, by the way: Ferrari and Mercedes-Benz.


My parents know what Tesla is.

I have friends throughout europe and asia who know what Tesla is.

Have you heard about the model X or model 3? their delays? They have also delayed their profit guidance up to 2019. They sell some tenths of thousands of niche cars, have enormous debt and operating costs, and have a market cap like they were going to sell millions. Now they've said they're delaying their mainstream vehicles another year or pair of years. By then BMW and others will have their electric range

I'm sorry but Tesla is pure hype for geeks and snobs (in the US), vaporware+bubble stock (and brand).

The Model S is a good car by the way.

And of course they're unknown, do you think the people on forums and car-tech sites represent a big percentage over the whole population?

You sound like me when people were trying to explain why this bookstore called Amazon was so spectacular. I turned out to be wrong.
Score: 22 Votes (Like | Disagree)

Seriously? Do you think the world ends in Alaska or what? So you're saying me that if we select random people from all over the world, both sex and all the age ranges, Tesla will be a commonly recognized and positively considered brand? You have to be joking. Do your mothers even know what Tesla is or recognize its emblem?

Alaska, if you open your eyes you would have seen that i live in Sweden, and even all the way over here Tesla have alot of media exposure, everyone doesnt live under a rock like you. And since i already told you in my other post that everyone i know knows what a Tesla is that would have answered your last question but you still go on this incredible stupid rant of yours, refusing to listen even though several people now have told you how wrong you are.

I hope you are just trolling.

Again, you do realize that Tesla was founded 12 years ago, only sells in a handful of countries (mainly in 1 country), have no advertising, don't compete in any kind of motorsport, and has sold 50k cars, do you?

Ok, now it is obivous that you dont know what you are talking about. Tesla sells to quite a few countries actually, more than a handfull of european countries, even have superchargers placed all over western and nothern europe: http://www.teslamotors.com/en_EU/supercharger
Also it has quite alot of advertising and alot of media exposure.

You are wrong, i dont understand why you are so incredible stubborn when alot of people have told you how wrong you are. Why is it so important for you that you insist on that Tesla is a "nobody"
Score: 14 Votes (Like | Disagree)

Both are a good and very strong brands.

No, Apple is a very good and very strong brand, maybe the best. Tesla is a niche+vaporware quite unknown brand.

Apple has infinitely more money, expertise and power. If Tesla thinks they are winning at something, is because Apple wants it that way, or simply doesn't care.

Let's be realistic.
Score: 14 Votes (Like | Disagree)
Read All Comments