Supply shortages can sometimes signal an imminent update, but there's uncertainty when it comes to a potential 15-inch Retina MacBook Pro refresh due to a distinct lack of Broadwell chips appropriate for the machine. For several months, we've had no updates on the release date of Broadwell chips that would be used in the 15-inch Retina MacBook Pro, making it difficult to pin down an upgrade timeline.

Along with slipping shipping estimates, however, we have another potential piece of evidence pointing towards the possibility of a June refresh -- a MacRumors reader who ordered a 15-inch Retina MacBook Pro has received a delayed delivery date ranging from June 9 to June 15. June 9 is one day after the kick off of the Worldwide Developers Conference and the day after the event keynote where any new product would be introduced. 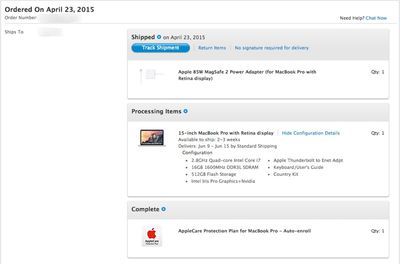 The Retina MacBook Pro in question is a custom configured 15-inch model with a 2.8Ghz processor and 512GB of storage, originally ordered on April 23. At the time, it had a two to three week delivery estimate, suggesting it should have arrived in May, but Apple's pushed it back to seven weeks.

A single customer's order set to arrive on June 9 just after the WWDC keynote is curious and may suggest Apple's waiting until a refresh to ship his order, but there's also a chance that it's a mere coincidence. It's entirely possible we won't see updated 15-inch Retina MacBook Pro models for several more months.

We last heard Broadwell chips for the 15-inch Retina MacBook Pro were coming in July or August, making a WWDC refresh unlikely, but a handful of desktop-class chips in the same family began shipping two weeks ago, suggesting Intel might be ahead of schedule.

If Intel is ready to ship the chips or if Apple has already quietly received shipments ahead of a wider release, there's a chance we'll see a Retina MacBook Pro update at WWDC. If the chips are not shipping out until July or August, a WWDC refresh or update announcement is not likely.

As we said in a deeper post covering potential chip upgrades for the Retina MacBook Pro and the iMac, Intel's Broadwell chip delays and Broadwell's convergence with Skylake chip release dates have made it difficult to divine accurate update timelines for these machines.

AngerDanger
My body is ready for the first computer with only half a port, but I do hope they keep the number of fans above zero. 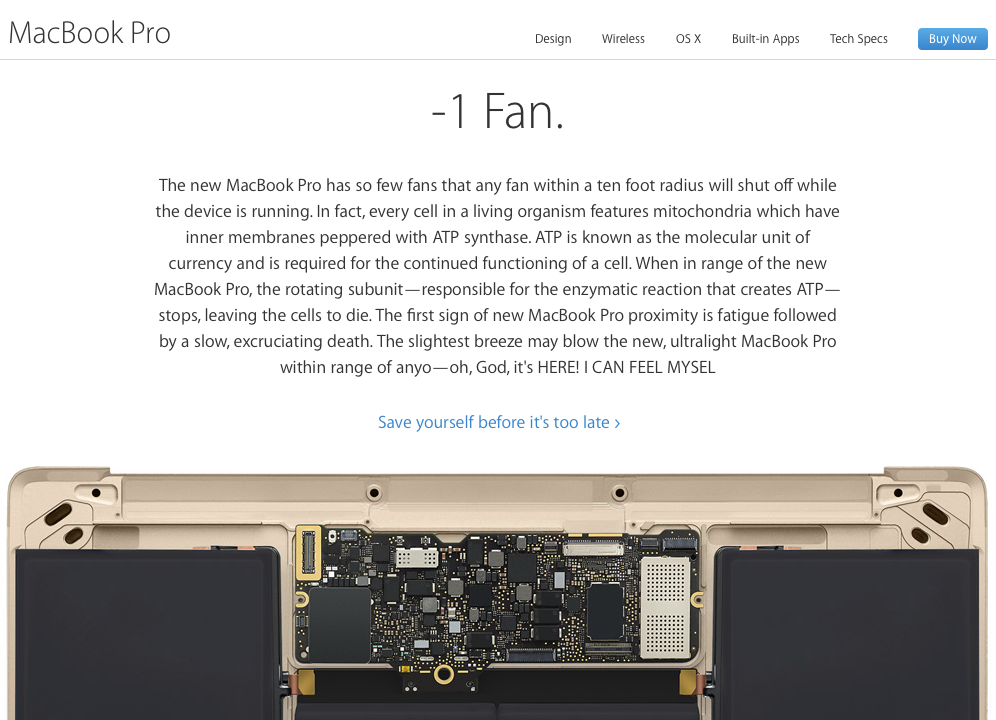 that order is getting canceled. Joel fake ordering to show delivery dates.

Apart from the fact that 1/3 of the order actually shipped and the rest is processing so past cancellation point and not sure why you'd order Applecare if you intended to cancel or return.
Score: 16 Votes (Like | Disagree)

Hopefully they will reveal a redesigned Skylake version with DDR4 etc. That would definitely make my year!

Seeing as Microsoft and some laptop manufacturers are basing new laptops on SKylake, and to have Skylake ready for Windows 10 (which has an August-September release scheduled from the rumors) -
Intel could have a 28W and 35W Skylake chip ready in time for an announcement at WWDC (They have Computex before WWDC if they wanted an announcement) - Plus Mac Pro could get an update too seeing as the new Xeon is ready.

well i will buying my first macbook for ios app development(just started learning sometime ago) and wanted skylake . It would be huge disappointment if apple chooses to update rmbp15 with broadwell considering the fact that skylake is much much superior .
its just a matter of 2-3 months when intel launches skylake processor at idf conference is there a chance apple bagged the first shipment and that too this much early. ?? :excited:
Waiting eagerly as it is pain to develop using virtualisation :(

I don't understand why all of you people think there is a chance of a skylake 15" macbook pro coming out soon???

That chart of intel roadmap is out of date. Intel's chips are delayed several months like they are every generation. Skylake is not really coming out in 2015.

Only like half the broadwell chips are out so far.

By the end of 2015, we may get CORE M skylake chips but thats it.
Then early 2016 more skylake chips will start trickling in.
And it will not be until Q3/Q4 of 2016 until skylake chips come out suitable for the 15" macbook pro.


Stop hoping a skylake macbook pro will be coming out this year, and stop asking Apple to skip broadwell generation because that makes no sense.
Score: 10 Votes (Like | Disagree)