While it's true we're approaching the Worldwide Developers Conference in June, where Apple often announces new products, Broadwell chip availability remains an issue that makes it unclear whether we might get a refresh announcement at the event. 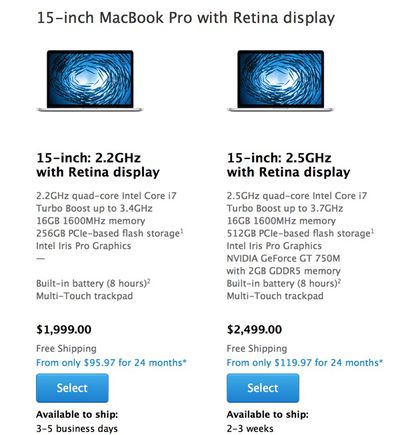 In recent weeks, Intel has started shipping a small handful of desktop Broadwell chips, but chips that would be used in the 15-inch Retina MacBook Pro and the iMac are not yet shipping out.

The desktop-class Broadwell chips that are currently shipping were also given prospective July/August 2015 release timelines, so their arrival does potentially herald the imminent release of Broadwell chips that would succeed the existing Crystalwell chips in the 2014 Retina MacBook Pro. If these chips are going to ship out earlier than the prospective July/August timeline, it's possible Apple could make a Retina MacBook Pro update announcement at WWDC.

If the chips are not shipping until July or August of 2015, however, WWDC seems a bit premature for an announcement of a minor chip refresh that would not ship for several months, making a WWDC debut unlikely.

It's worth noting that the high-end iMac is also seeing similar delays, with a shipping estimate of one to two weeks. The high-end iMac is in the same situation as the Retina MacBook Pro -- chips appropriate for an update are not yet available. Furthermore, chip roadmaps call into question whether there will be Broadwell chips available for Apple's non-Retina 27-inch iMacs at all.

Roadmap for Intel's desktop chips
As an example, the successor to the Core i5-4670 chip used in the low-end 27-inch iMac is the Core i5-4690 used in the low-end 27-inch Retina iMac, and the successor to that chip appears to be the Skylake Core i5-6600, suggesting a potential refresh for the non-Retina iMac might use that Skylake chip rather than the older Broadwell chip. Any upgrades to the 27-inch Retina iMac will also use Skylake chips rather than Broadwell chips.

Processor upgrades for the 21-inch iMac are a bit murkier as the chips used in those machines have no Skylake equivalents at this point in time, so it's tougher to speculate about potential chip successors Apple could use. It's also worth noting that the close proximity of Skylake and Broadwell chip releases could see Apple waiting for Skylake chips not only for the iMac, but also for the Retina MacBook Pro.

The major takeaway from the increased iMac and Retina MacBook Pro shipping estimates is that the Broadwell delays have thrown Apple's upgrade cycle into disarray, making it difficult to determine when we might see an update due to all the variables involved. If Apple chooses to go with a minor Broadwell update for the high-end 15-inch Retina MacBook Pro and those chips ship soon, we could very well see an announcement at WWDC.

If, however, those chips are not ready or if Apple should choose to forego Broadwell in favor of Skylake for a more substantial update, it's unlikely we'll see a WWDC refresh announcement for the 15-inch Retina MacBook Pro. iMac updates are even more difficult to pin down, but it seems unlikely a refresh is imminent.

Forgive my complete and utter lack of understand when it comes to intel processor naming schemes....but why are they still using the i5 designation?


Nope, they don't refer to revisions, but classes.

And in between, there's the Core M, i3, i5 and i7, as well as the low-cost Pentiums and Celerons. The M sits sort of in between the Atoms and the Core i series.

Of each of those, there's multiple generations. Broadwell refers to the current generation of Cores and Xeons (but not Atoms), preceded by Haswell, and followed by Skylake. The current 15-inch Retina MacBook Pros have a Haswell, because there isn't a suitable Broadwell yet (in particular, they use the "H" version, which offers four cores in a mobile CPU, and there is no Broadwell-H at this point). In contrast, the new Retina MacBook already has Broadwell (as does the 13-inch MacBook Pro) *namely a Broadwell-Y processor, a.k.a. Core M.

i3, i5, etc. differ in features, price points, etc., but not in generation. You can also tell by a digit in the product name; Haswell is the fourth generation Core i series, and 15-inch MacBook Pro CPUs all start with a '4'.
Score: 11 Votes (Like | Disagree)

NissanGuy23
I think they should just skip to Skylake, and we will hopefully see a big boost in performance which is truly what we want a 15" for. I wouldn't want to see a 15" Broadwell because it would likely be similar performance numbers as the current, only more efficient due to the 14nm process. Broadwell Air's came out and they had the same geekbench specs.

Also i wonder if the next 15" will get the new Macbook keyboard style, and force touch?
Score: 11 Votes (Like | Disagree)

Forgive my complete and utter lack of understand when it comes to intel processor naming schemes....but why are they still using the i5 designation?


I3, i5, i7 does not represent generations, but tiers of intels CPUs... For generations Intel uses code names like sandy bridge, ivy bridge, haswell, broadwell etc...
Score: 9 Votes (Like | Disagree)

Well I will get flamed for this, but I want an ARM based Mac please. Apple has almost total control of the supply chain for the iphone, ipad, and Watch (well okay they seem to have no control whatsoever on the watch right now). But on the Macs, they are beholden to intel. The ARM chips are really powerful these days and I would even bet that the A8 is as powerful as some of the intel Atom chip (probably more powerful but I will play it conservative).


No Intel chips = no more Macs for me. I run VM's and do all sorts on my computers and Intel's tech is so far ahead of anyone else's.
Score: 7 Votes (Like | Disagree)

Mums
Actual Mac news is like a needle in a haystack around here now-a-days.
Score: 6 Votes (Like | Disagree)
Read All Comments