The Apple TV has gained two new channels today in CBS Sports and USA NOW, bringing on-demand sports, drama, comedy, sitcoms and more programming to the set-top box in the United States. The new channels should be appearing on the Apple TV for all users today as an over-the-air update, with CBS Sports offering free sports clips for all users worldwide and USA NOW requiring a U.S. cable subscription to access most content. 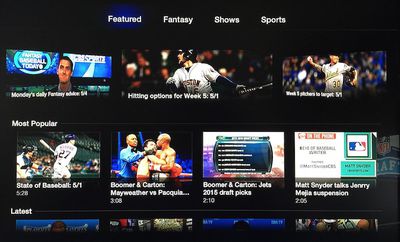 CBS Sports channel for Apple TV
The new channels arrive less than six weeks before Apple is expected to announce its next-generation Apple TV alongside a full-fledged streaming TV service at WWDC in June. The new A8-based set-top box will reportedly feature both an App Store and Siri, in addition to a redesigned remote control with a touch pad and significantly higher internal storage than the current 8GB model.

Apple's much-rumored streaming TV service will consist of a lightweight package of about 25 channels for between $30 to $40 per month, anchored by networks such as ABC, CBS and Fox. The service will be available on several devices, including the iPhone, iPad and Apple TV, with other potential channels in the lineup including Discovery Channel, Animal Planet, TLC, MTV, Comedy Central, FX and Nickelodeon.

USA NOW channel for Apple TV
Apple has been steadily adding new channels to the Apple TV this year, including NBC Sports in late April, CNNGo and TED, Tastemade and Young Hollywood in March and Sports Illustrated's 120 SPORTS in January. HBO NOW, a subscription-based service that provides on-demand HBO content, also went live on Apple TV in early April for $14.99 per month with a free trial available.

Update 11:05 AM PT: Crave TV and Shomi are now available on Apple TV in Canada per Rene Ritchie, with the former requiring a Bell TV subscription and the latter needing a Rogers or Shaw subscription. French-German TV network Arte is also now available on Apple TV in Germany, Austria, Switzerland, France, Belgium and Luxembourg per iFun.de. Fox Sports is also available in Australia, while Hopster has been added in the UK.

MacDevil7334
Apple TV is so desperately in need of an overhaul. This system of just having more and more channels clutter up the home screen with no real organization options aside from hiding unused channels has long outlived its usefulness. I really hope the rumors of a revamped Apple TV with a true App Store that might actually give me some control over the channels that show up on my device are finally going to turn out to be true this year. I've been disappointed too many years running to get my hopes up though...
Score: 15 Votes (Like | Disagree)

John.B
Dear Apple: This only helps if we can get the content without an existing cable subscription.
Score: 14 Votes (Like | Disagree)

btbeme
For some reason, posters here think that Apple is intentionally requiring paid subscriptions to watch these channels, and are hoping or demanding that "Apple" changes its policy.

It isn't Apple. That I can guarantee.

And, I can also guarantee that both the ATV interface AND the whole way that you watch TV will be radically different in the near future, depending on how the content providers want to play the game. It will likely take years before they fully agree to a radical overhaul of broadcast TV - there is an enormous amount of money at stake, and the licensing issues are unbelievably complex - but change is coming.

Dear Apple: This only helps if we can get the content without an existing cable subscription.

Perhaps Apple will adopt an amazing new concept as a Store model where I can actually choose what content I want to see on Apple TV rather then forcing it on me at regular intervals and having me spend time removing content I can't see because I am not subscribed or have a cable TV service.

2457282
Tim, PLEASE stop the madness. Stop adding channels that require cable subscription. This is of no use. If I have cable I dont need the Apple TV to see those channels and if I am a cable cutter (I am), this is utterly useless.

And while I have your attention. PLEASE send me my watch already.
Score: 7 Votes (Like | Disagree)
Read All Comments