Apple Watch continues to be marketed around the world leading up to its highly-anticipated launch in April, this time making its Canadian debut in the upcoming May issue of fashion magazine Flare. The publication features actress Hailee Steinfeld wearing an Apple Watch Sport on two separate covers in both silver and space gray, accompanied by an article listing things you can do with your Apple Watch. 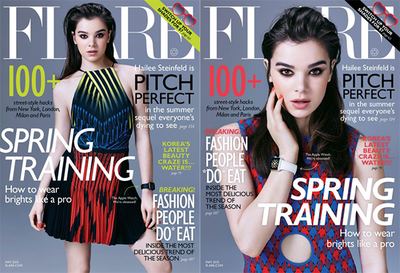 In addition to the fashion shoot, the magazine outlines more than a dozen ways the Apple Watch can be used beyond timekeeping, such as for ordering a coffee, boarding a flight, learning a new language, hailing a cab, managing finances, tracking health and fitness, identifying songs, controlling a vehicle, becoming a karaoke star, controlling an Apple TV, unlocking a hotel room and more.

Apple Watch has been featured in several fashion and fitness magazines worldwide in recent months, including Self, Vogue, Style, East Touch, YOHO, Fitness Magazine and Elle. Apple has heavily promoted its first wearable device in the fashion industry leading up to its launch, and has set up boutique shops at Galeries Lafayette in Paris, Isetan in Tokyo and Selfridges in London for the product.

Canada is one of nine countries where the Apple Watch is set to launch later this month, alongside the United States, Australia, China, France, Germany, Hong Kong, Japan and United Kingdom. The wrist-worn device will be available for pre-order and try-on appointments beginning April 10 ahead of an April 24 release date. Wider international availability is likely to occur in the near future.

Who's the brainless one? She is an actress who, at the age of about 14, played the lead female role in the True Grit remake. If you haven't seen it, you should. She was quite amazing in it.
Score: 20 Votes (Like | Disagree)


What is brainless is your comment. Try using your own before you post instead of disparaging people you've never met. Truly your comment says more about you than the person you are attacking.
Score: 19 Votes (Like | Disagree)

CJM
Anyone else starting to feel like these stories are nothing more than advertising?
Score: 19 Votes (Like | Disagree)


How do you know she's brainless?
Score: 16 Votes (Like | Disagree)

FieldingMellish
A picture of a brainless model staring at the camera makes me want to go out and get an Apple watch.
Score: 16 Votes (Like | Disagree)
Read All Comments

Thursday January 27, 2022 12:08 pm PST by Juli Clover
Apple today seeded the first betas of iOS 15.4, iPadOS 15.4 to developers for testing purposes, adding a slew of new features to the latest iOS operating systems. iOS 15.4 is the biggest update that we've had to iOS 15 to date, and it brings Universal Control, Face ID with a mask, new emojis, and tons more. Face ID With a Mask With iOS 15.4, there is now an option to unlock your iPhone...
Read Full Article • 85 comments