The Apple Watch has already been spotted within the pages of several fitness and fashion-oriented magazines during the month of March as Apple makes an advertising push ahead of the device's launch, and as of this week, it's also scored a spot on the cover of Fitness Magazine.

On the cover, model Kate Bock wears an Apple Watch Sport with a white fluoroelastomer band. The Apple Watch feature in the magazine is all images, and doesn't offer anything in the way of details as other Apple Watch spots have done. Fitness had initially shared some details about the shoot with MacRumors that were used in this post, but has since asked us to remove the information. 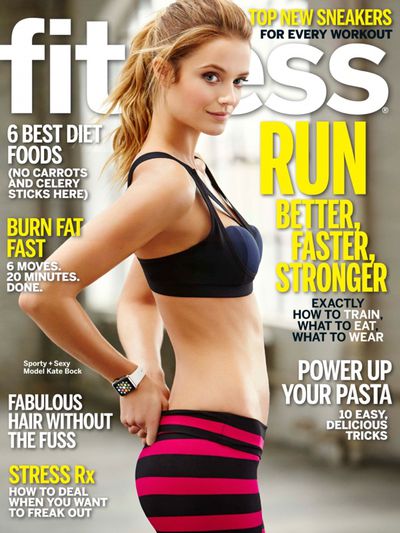 Fitness VP/Brand Development for Shape.com and Fitnessmagazine.com Betty Wong gave MacRumors the following statement on the magazine's collaboration with Apple:

"FITNESS, with our tech-savvy, goal-oriented female audience, is a great partner in helping showcase the Apple Watch. I hope to be able to get my hands on an Apple Watch Sport sample in the coming month and really put it to a sweat test for Fitnessmagazine.com to see how useful it is in helping our readers stay motivated to exercise, keep track of their physical activity, or connect with people and their to-do lists while out for a run.

With the Apple Watch positioned as Apple's first wearable accessory, it's no surprise to learn the company has been carefully curating its image and exercising control over the way it's portrayed in magazines. Apple wants people to see the Apple Watch as fashionable, sporty, and genuinely useful to the average person rather than as something geeky and technical that doesn't belong in the fashion world. Thus far, Apple's Apple Watch marketing efforts have been split between posing the Apple Watch as a fashion statement and as a fitness accessory.

On the fitness side, the Apple Watch has been featured in this month's issue of Fitness and it was on the cover of the March issue of Self magazine, on the wrist of Candice Swanepoel. Self did a full feature on the Apple Watch, highlighting its accelerometer, heart rate sensor, and more. Model Christy Turlington has also been promoting the fitness-oriented features of the Apple Watch, both on stage at Apple's March 9 event and on a personal blog on Apple.com. Turlington is using the Apple Watch as she prepares for the London Marathon in April.

On the fashion side, the Apple Watch has been featured in Vogue, Style, East Touch, and YOHO. Late last year, it was on the cover of Vogue China and it was shown off at an exclusive event at Parisian fashion boutique Colette. It will also be featured in a number of high-end exclusive popup shops around the world after it's released.

Update 5:21 PM PT: This post has been updated and revised at the request of Fitness.

Eddy Cue wears his on his right. Is he wearing his wrong?

Sofabutt
It's pretty pathetic how Apple is trying to market their junk as Luxury and Fashionable. Luxury is a fine Swiss watch. Fashionable is not some LCD screen with touch capabilities.

THe watch looks like a hunk of junk. It's clunky, has no inspiration behind it other than the iPhone screen.

Granted it might contain some innovative ways of interacting with a touch device, but that's about as good as it gets.

I'm a die hard Apple fan. I have 8 Airport Extreme routers, 10 Apple Macs of various sorts, three iPads and an iPhone, but this Watch thing makes me want to vomit.
Score: 13 Votes (Like | Disagree)

[We] hope to be able to get [our] hands on an Apple Watch Sport sample in the coming month and really put it to a sweat test for Fitnessmagazine.com to see how useful it is in helping our readers stay motivated to exercise, keep track of their physical activity, or connect with people and their to-do lists while out for a run.

Just my personal feeling, but as a lifelong runner, I think a run is the time to disconnect from your electronics, your email, and your to do list. If checking your to-do lists mid-stride is your cup of tea then so be it, but it makes me a little sad.

Fortunately, the :apple:watch won't be able to do much of that at all when taken running anyway, unless an iphone is also present. ;)
Score: 12 Votes (Like | Disagree)

So this is false advertising. The watch screen would not be active in that position.


It's advertising. Looking for truth in advertising is like looking for diamonds in a bag of charcoal. It's a waste of time. Images simulated, actions not real time, closed course - professional driver, price advertised is base model - vehicle shown is top of the line trim.

Advertisers are trying to sell products. It's what they do.
Score: 9 Votes (Like | Disagree)

Tiltasauras
Um, she's wearing it backwards. The crown is on the inside of her forearm (should be on the outside but flipped with button for lefties). Guess they wanted the crown in the shot.
Score: 8 Votes (Like | Disagree)

It's likely Photoshopped, at least color-enhanced, but some people actually look like that.

Right. She's young and beautiful and a cutie-patootie . I doubt they needed to Photoshop much unless maybe she was wearing a Pebble. She also looks great because it's been a long time since I've seen a woman in the media who looks to be 100% as "God made her".

Oh I disagree. I think she looks like a healthy weight. Many young girls are thin but it's rarer and rarer as the years go on and many women start to gain weight unless they eat less/move more.
Score: 7 Votes (Like | Disagree)
Read All Comments