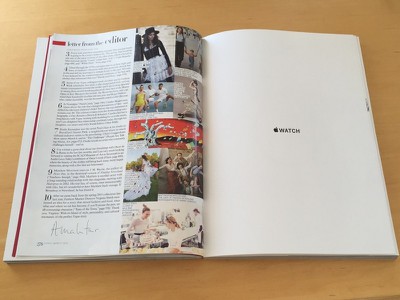 The Apple Watch is shown on multiple pages of the magazine, depicting different watch casings and band designs in clean ads that feature nothing but the Apple Watch itself. The images are actual size, giving readers an idea of how big the watch is in real life.

There's a heavy focus on Apple Watch bands, several of which are depicted in close up images that show off details on their construction. The Milanese Loop is featured on one page, while the navy-colored Leather Loop is shown on another page. The Apple Watch sport with a green band is also shown, as is the fitness interface for one of the Apple Watch's built-in fitness apps. Yet another page features the rose gold Apple Watch Edition with a Rose Gray Modern Buckle band.

It's likely that several other publications beyond Self and Vogue will be featuring the Apple Watch in the coming weeks as the device's April launch date approaches. Apple has targeted fashion and fitness markets thus far, and is expected to market the Apple Watch to a wide range of potential customers.

Up until this month, Apple's Apple Watch marketing has been somewhat reserved, limited to an appearance at Parisian fashion boutique Colette in September and the Vogue China cover in October, but the company appears prepared to begin more serious marketing efforts.

As we reported last month, Apple asked some developers creating content for the Apple Watch to have their apps completed by mid-February, possibly to have apps ready to go for marketing purposes or an upcoming event. Apple also invited select developers to its Cupertino headquarters to put the finishing touches on Apple Watch apps and the company may be preparing to launch a series of Apple Watch popup stores in various locations around the world.

AdeFowler
Beautiful adverts. When I design ads like that my clients asked me why I haven't used up all that free space that they're paying for. :o
Score: 29 Votes (Like | Disagree)

willwritefortea
Apple has continually pushed the fashion item aspect of the watch because for many consumers, that is what the Apple Watch will be. This is also why Apple can get away with charging $5,000 or more for the Edition line of watches, because the people that buy the Edition, and many of the people who buy the Sport or Classic Apple Watch, do not want a small phone on their wrist, they want a device that makes people ask "what is that?"

Apple is correct in pursuing this goal. The Apple Watch will appeal to the average, every day, my-phone-does-everything-I-need-it-to-do person, while simultaneously giving a nod to the tech crowd. It can be used for fashion as much as function.

That is the genius of the Apple Watch: anyone can use it, so everyone will want it.
Score: 15 Votes (Like | Disagree)

NissanGuy23
They sure are exited about those bands..
Score: 14 Votes (Like | Disagree)

kirsch
The images are actual size

Those bands are humongous! :D
Score: 11 Votes (Like | Disagree)

Heltik
Love how Apple let's the product do the talking.
Score: 11 Votes (Like | Disagree)
Read All Comments

Wednesday June 16, 2021 7:11 am PDT by Hartley Charlton
With no sign of redesigned MacBook Pro models at this year's WWDC, when can customers expect the much-anticipated new models to launch? A number of reports, including investor notes from Morgan Stanley and Wedbush analysts, claimed that new MacBook Pro models would be coming during this year's WWDC. This did not happen, much to the disappointment of MacBook Pro fans, who have been...
Read Full Article • 204 comments

Wednesday June 16, 2021 10:49 am PDT by Juli Clover
Apple CEO Tim Cook this morning participated in a virtual interview at the VivaTech conference, which is described as Europe's biggest startup and tech event. Cook was interviewed by Guillaume Lacroix, CEO and founder of Brut, a media company that creates short-form video content. Much of the discussion centered on privacy, as it often does in interviews that Cook participates in. He...
Read Full Article • 285 comments