Model and Victoria's Secret Angel Candice Swanepoel will be wearing the Apple Watch Sport with a white fluoroelastomer band on the cover of the magazine. Self also has more in-depth coverage on the device, highlighting its accelerometer, heart rate sensor, GPS and WiFi (through the iPhone) in print and in photos. 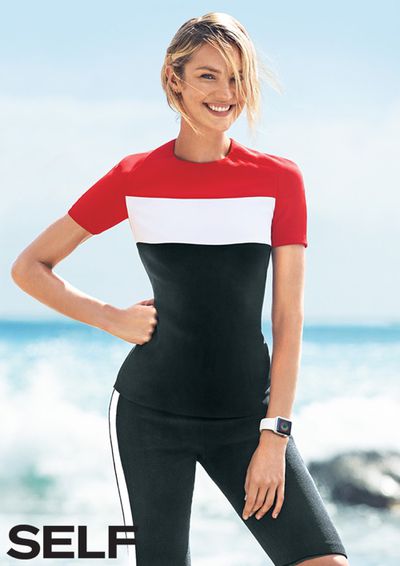 Aside from the I-want-to-be-Candice quality of our new March cover, notice anything else about the photo? The Apple Watch is getting a star moment, too, as Candice is the first woman to wear one on a magazine cover in the US. With the device starting at around $349 available next month, it's on our wishlist. (Even our editor-in-chief, Joyce Chang, can't wait to use her Apple Watch--check it out in our March Editor's Letter, available to download below.)

Up until now, Apple's Apple Watch marketing has been heavily focused on fashion, but with the piece in Self, the company appears to be targeting fitness enthusiasts who might purchase the Apple Watch for its health-related functions -- step tracking and heart rate monitoring.

It's likely that Self will be just one of many publications to feature the Apple Watch in the coming weeks as the device's launch approaches, and Apple is expected to market the Apple Watch to a wide range of potential customers. Apple's marketing efforts have been fairly reserved thus far, limited to an appearance at Parisian fashion boutique Colette in September, the Vogue China cover in October, and this month's Self issue, but there are hints that Apple is preparing for a major marketing push.

As we reported last month, Apple asked some developers creating content for the Apple Watch to have their apps completed by mid-February, possibly to have apps ready to go for marketing or event purposes. As of this week, Apple is also reportedly inviting select developers to its Cupertino headquarters to put the finishing touches on many Apple Watch apps.

According to Apple CEO Tim Cook, Apple is planning to begin Apple Watch sales in April, though a more specific date has not yet been shared.

AngerDanger
Meanwhile, the folks at Pebble scramble for some sort of response:

odds
Wow, I don't know why I didn't expect coverage like this. I'm impressed. Candice Swanepoel, first of all, is hot as h*ll and she has been my favorite Victoria's Secret Angel for a long time. Apple is making the right moves, likely thanks to the ex-CEO of Burberry. If I were an active woman, I'd definitely want an Apple Watch after seeing Candice wear one. Hell, I am an active MAN and I definitely want one after seeing Candice wear one. :cool:
Score: 21 Votes (Like | Disagree)

iBreatheApple
The wait is killing me!
Score: 16 Votes (Like | Disagree)

dec.
People will probably say all sorts of things about how irrelevant models and covers are, but ultimately, the Apple Watch - like any other "wearable" in general - also has to appeal to the crowd that likes pretty things (or that what they consider being "pretty"). Looks like Apple made the right hires for marketing the Apple Watch.
Score: 12 Votes (Like | Disagree)

dazed
Still looks like the Casio calculator watch I had at school in the 80s.
Score: 10 Votes (Like | Disagree)

myrtlebee
Guess her iPhone is strapped to her ankle
Score: 10 Votes (Like | Disagree)
Read All Comments