Apple’s newest operating system, iOS 8, is installed on 72 percent of iOS devices almost five months after it first launched in September of 2014, according to new numbers Apple shared on its App Store support page for developers.

Installation numbers are up 9 percent since mid-December and have jumped 3 percent since January 20, following the launch of iOS 8.1.3 at the end of the month. As iOS 8 adoption grows, the number of users running iOS 7 has dropped to 25 percent. 3 percent of users continue to use an earlier operating system. 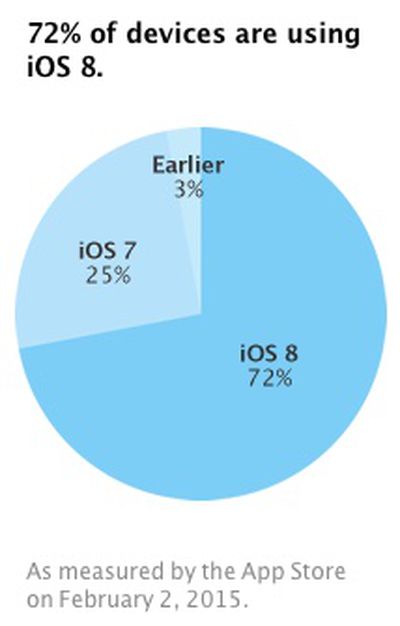 iOS 8 adoption has been somewhat slower than iOS 7 adoption, as iOS 7 was running on 80 percent of devices in January of 2014, compared to iOS 8’s 69 percent adoption rate at that same time. Possible explanations for the slower adoption rate include the large amount of storage space required to update to iOS 8 and the major bugs the operating system has experienced. Excitement over iOS 7’s complete visual redesign may have also driven a larger number of upgrades.

Apple has resolved many of the initial bugs that were found in iOS 8 with several operating system updates, including iOS 8.1, iOS 8.1.1, iOS 8.1.2, and iOS 8.1.3, which has led to an uptick in adoption, and the company has also made an effort to inform customers that it’s possible to install iOS 8 via iTunes to alleviate storage space issues.

Though adoption of iOS 8 has been slower than iOS 7 adoption rates, Apple is still way ahead of Android. The latest version of Android (5.0, aka Lollipop), released in November, is currently only installed on 1.6 percent of Android devices. The vast majority of Android users are still running KitKat, which was released in October 2013, or even Jelly Bean, which first debuted in June 2012.

Android updates often take a long time to propagate to customers because of the large number of different Android-based devices on the market. Android updates must go through carriers and cell phone manufacturers, who like to build their own apps and interfaces into the operating system.

The number suggest either:

(a) Android users are satisfied with KitKat and scared of updating to Lollipop because of fears of Google and/or bugs.

(b) Android users have gotten frustrated with the Android experience and stopped using their devices before Lollipop.

I'm not using an Android phone but there is one thing I can tell you.
If Apple would let me go back to iOS7 I would do so immediately.

But Apple wants to keep showing figures like these while slowing down my device , so that I buy their newest product.
Let's praise them . Yay, Apple. Android sucks and so on and so forth..
Score: 34 Votes (Like | Disagree)

The number suggest either:

(a) Android users are satisfied with KitKat and scared of updating to Lollipop because of fears of Google and/or bugs.

(b) Android users have gotten frustrated with the Android experience and stopped using their devices before Lollipop.

allanfries
Now, if only they can get IOS 8 running efficiently. :rolleyes:
Score: 18 Votes (Like | Disagree)

MattMJB0188
Very hard to believe iOS 8 is at that kind of adoption. Such a horrible OS.
Score: 16 Votes (Like | Disagree)
Read All Comments