Apple is encouraging customers that have opted to stick with older versions of iOS to upgrade to its latest mobile operating system, iOS 8, released to the public in September.

The company has been sending out emails to iOS users who have yet to install iOS 8, letting them know that their "iOS 8 update is waiting." The email offers information on what's included with iOS 8, detailing features like QuickType, the new Health app, Family Sharing, iCloud Drive, and Continuity.

It also gives specific installation instructions, letting users know that they can upgrade wirelessly using the Software Update tool or through iTunes if their devices are low on space. Apple's iTunes installation tip could spur quite a few users to upgrade, as a lack of free space on low capacity devices appears to be one of the major factors preventing users from updating. 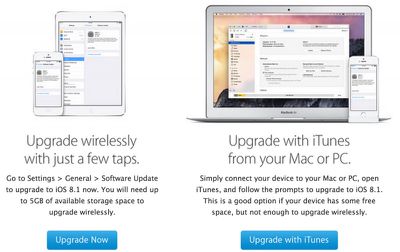 iOS 8 adoption has been somewhat slower than iOS 7 adoption, and just three weeks after it was released, iOS 8 installation numbers had stagnated. While we originally chalked this up to a number of significant bugs in the operating system, our readers quickly pointed out that an over-the-air update requiring 5GB of free space was a major hurdle to overcome. Many users seem to be unaware that installing via iTunes is an option, as evidenced in one comment on our forums:

I have friends who are still on iOS 7 because they don't have enough free space available to upgrade. When I tell them they can upgrade by connecting their phones to their computers, and thus, doing it through iTunes, they look at me like I'm crazy, or like it's 2008 or something.

Over the course of the last week, iOS 8 adoption numbers have picked up somewhat, after Apple introduced new features like Apple Pay with the recent iOS 8.1 update. As of October 27, Apple's official installation numbers suggested the OS was on 52 percent of devices, up from 48 percent on October 13, and data from MixPanel suggests that number has risen even higher in November, hitting 59 percent.

timshundo
16GB Isn't enough for even the most casual of users anymore. Most of my friends are down to 100's of MB of free space, far from the 5GB required to update.

And iCloud Photo Share Library Storage Cloud Beta Share Backup 5GB Optimized is so convoluted that casual users don't even bother trying to figure out how that crap works and would rather just manually manage their photo libraries every time they get a low disk space error.

I think Apple put this on themselves and they're just gonna have to get used to not being able to brag about the amount of users on their latest OS.
Score: 32 Votes (Like | Disagree)

usersince86
iOS 8 may still be buggy, and it may slow down my iPhone 5.

Born Again
Ios 8 is lipstick on a pig.

Apple is their own worst enemy on this one. I have 3 'older' devices that have 16GB and can't update without cleaning off a lot of stuff. With the size of these recent updates 16GB should have never been an option with new devices. Apple, I'm a big fan but you are getting what you deserve with this one.
Score: 13 Votes (Like | Disagree)
Read All Comments