Following approximately four-and-a-half months of availability, iOS 7 is now installed on 80 percent of devices connected to the App Store, according to the newest numbers posted on Apple's App Store support page for developers. 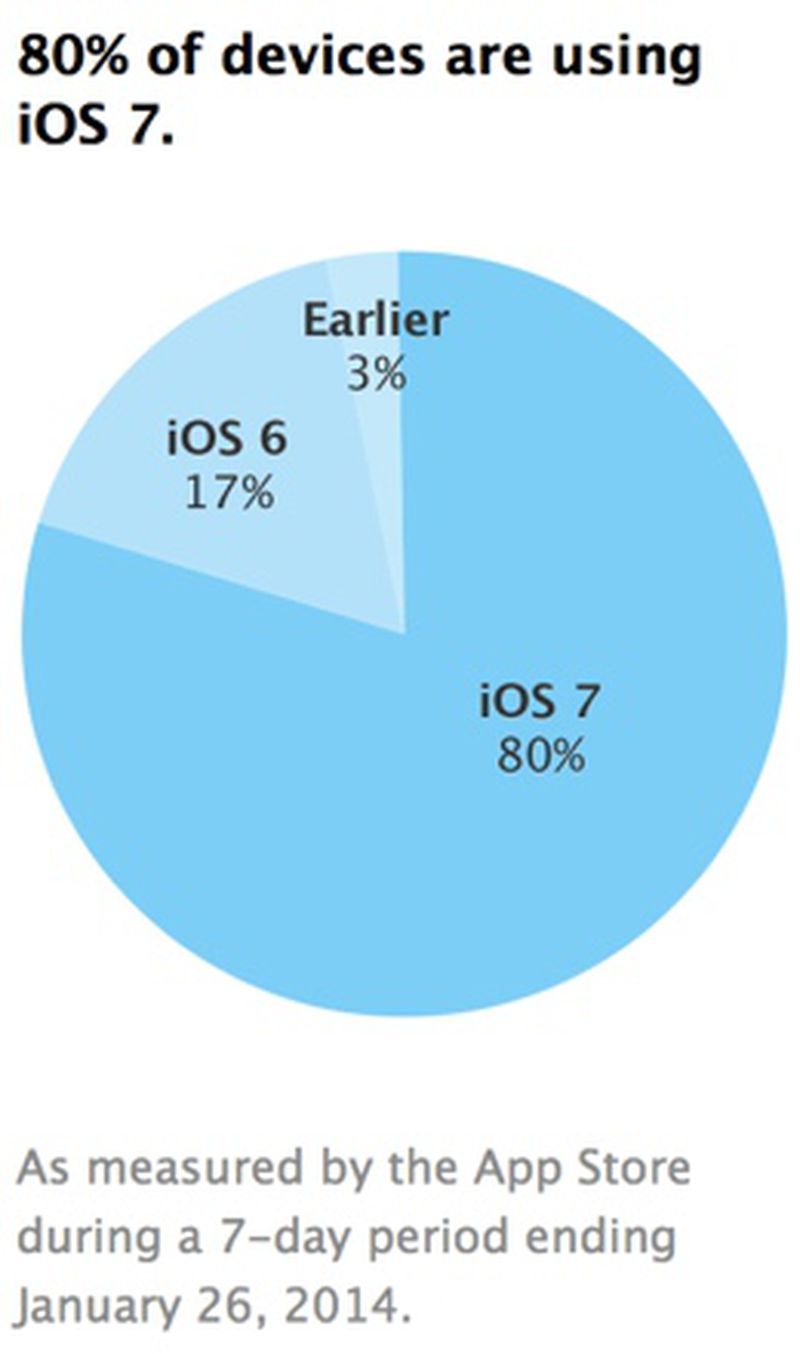 As iOS 7 adoption numbers grow, iOS 6 usage continues to drop, and the older operating system is now installed on just 17 percent of devices. Three percent of devices also continue use even older versions of iOS.

In early December, iOS 7 usage was at 74 percent, jumping to 78 percent later in December, while iOS 6 usage first declined to 22 percent and then to 18 percent.

Apple's data, which comes directly from the App Store, represents the most accurate iOS 7 adoption information for developers.

I just wonder how many people are actually happy with their upgrade. Anyone I've met who likes it can never give me specifics, which makes me think they either don't use their devices much, or ignore the inconveniences and horrible look of the OS in general.


It's only your opinion that it looks horrible. I personally love the new look!
Rating: 10 Votes

johnalan
I really like iOS 7, as soon as 7.1 hits I think it'll be a fantastic mobile OS.
Rating: 10 Votes

Max Lee
Numbers like this are a complete joke.

My ipod touch 2nd gen gets used every single day. Apple intentionally cut off support at version 4. Since it can no longer update or download apps etc, it "disappears" off the charts, and doesn't get counted in the 20%.

There are millions, if not tens of millions of devices like this, massively under-representing the "not 7" models in use.
Rating: 7 Votes

macschrottpro
...as representive as the stock market

If people were able to downgrade, these numbers could actually represent something !
Rating: 7 Votes

Rad99004
The numbers don't say how many wish they never did.

I wish I could go back. This is the buggiest release yet.

My IMAP email is still broken :(

It's only your opinion that it looks horrible. I personally love the new look!


I agree the colors are awful. I'm glad they will be toning them done on the next release.
Rating: 7 Votes

tbrand7
Android is improving as well. "KitKat" is already as its high point at 1.9% after 2 months.
Rating: 6 Votes

flottenheimer
My iPad 1 is still on 5.11. And since it can't be updated it will continue to 'drag down' this statistic "forever" : )
Would be interesting to see a version of the chart "minus non iOS7 capable devices".
Rating: 6 Votes

It's only your opinion that it looks horrible. I personally love the new look!


It is also your opinion that it looks good. I personally STILL hated the new look.

But again, we are all entitled to our opinions.
Rating: 5 Votes

Android is improving as well. "KitKat" is already as its high point at 1.9% after 2 months.


What does this have to do with iOS adoption rates? Did you just want to use any post you can find to have a dig at Android?
Rating: 4 Votes
[ Read All Comments ]