After more than two months of availability, Apple's newest mobile operating system, iOS 8, is now installed on 63 percent of iOS, according to new numbers posted on Apple's App Store support page for developers. 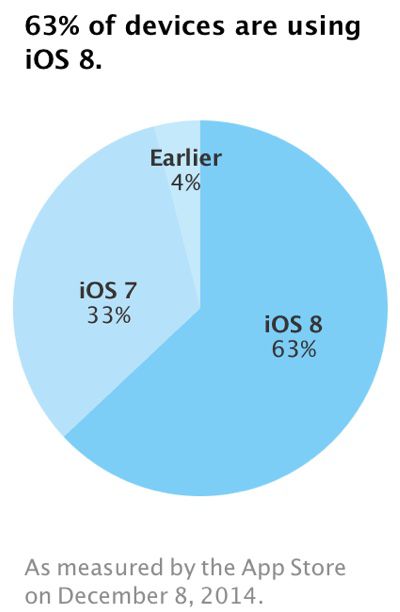 Apple's own iOS 8 adoption estimates are based on App Store usage and are mirrored closely by data from analytics service MixPanel, which puts iOS 8 adoption at 63.94 percent as of today.

The number of users installing iOS 8 initially stagnated at 47 percent just three weeks after the software was first released to the public, but installation numbers have been climbing steadily since then due to a number of bug fixes and an email campaign from Apple encouraging users to upgrade.

iOS 8's low adoption rates were likely due to several major bugs the software faced in its early days and a lack of space on 16GB devices for installing the OS. Apple's recent email campaign attempted to alleviate the latter issue, informing users with little space on their devices that they could upgrade through iTunes.

iOS 8.1, iOS 8.1.1, and iOS 8.1.2, introduced today, all brought bug fixes for several major issues, repairing problems and improving the stability of iOS 8. Apple is also working on iOS 8.2, which is expected to bring additional bug fixes and has been seeded to developers for testing purposes.

nazaar
So that's 63% of iOS users with buggy iPhones.
Score: 32 Votes (Like | Disagree)

I'll use iOS 8 when I buy the iPhone 6 Plus, but won't be installing it on any of my current devices.

Will stick with iOS 6 on my iPad till it breaks and then no more iPads for me.I can't stand iOS 7/8 on my iPad just boring and flat with blinding white and Hello kitty icons:)
Score: 23 Votes (Like | Disagree)

MacbookSwitcher
Still proudly on iOS 7, and iOS 6 on one of my iPads. iOS 6 is much faster than iOS 7.

I'll use iOS 8 when I buy the iPhone 6 Plus, but won't be installing it on any of my current devices.
Score: 18 Votes (Like | Disagree)

braddick
Anyone here among the 4%'ers?
Score: 17 Votes (Like | Disagree)

robeddie
I never could understand this metric. Since all new iphones have come with ios8 preinstalled, and they're selling millions, the number is gonna climb since people have NO CHOICE but to use ios 8. Nor do those who upgraded to ios 8 from 7 have the CHOICE to downgrade if they decided they didnt like 8 (at least not without a huge complicated process).

The only real metric of ios 8's popularity would be people who chose to upgrade and were actually glad they did. So these numbers seem irrelevant to me.
Score: 14 Votes (Like | Disagree)

ThunderSkunk
And again, this poll says nothing about how many people are unhappy with iOS8 now that they have, and would uninstall it if Apple would allow them to.
Score: 9 Votes (Like | Disagree)
Read All Comments