Just about a day before Apple's October 16 media event, KGI Securities analyst Ming-Chi Kuo has issued a new report, saying that he expects supplies of iPad Air 2s to be constrained. His report also suggests that the 27-inch Retina Display iMac will have shipments begin before the end of the year and reiterates that the new iPad minis won't be a significant upgrade. 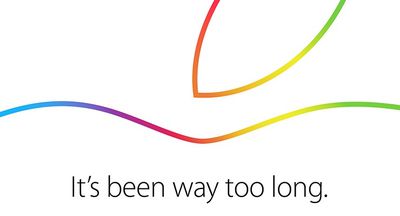 Of the new products, we think the market will be more interested in iPad Air 2. However, as the poor yield rate of anti-reflective coating cover lens has delayed mass production, we estimate 2014 shipments of iPad Air 2 of 7- 9mn units, lower than the 12mn units of the then-new iPad Air shipments in 2013. We thus expect iPad Air 2 to contribute less to the supply chain than iPad Air did last year. We also don’t expect the event to boost supply chain shares much.

Kuo goes on to once again suggest that a significant update to the iPad mini isn't likely due to the iPad Air's larger "contribution to Apple's sales and earnings" and that iPad mini is seeing limited development resources because Apple is working on a brand-new 12.9-inch iPad.

The 27-inch Retina Display iMac is likely to begin shipments before the end of 2014, with the 21-inch Retina Display arriving sometime in the second half of 2015. The delay between the two models, Kuo suggests, is because of how difficult it is to develop two different sized high resolution panels at the same time.

Finally, Kuo corroborates reports that new MacBook models will not make an appearance at the October 16 event as Apple is waiting on Intel's Broadwell chips before significantly upgrading its laptop line. This includes the rumored 12-inch MacBook Air.

Apple is holding its press event this Thursday, October 16 at 10:00 AM PT on its Cupertino campus. Besides new iPads and iMacs, Apple is also expected to announce the public launch date for OS X Yosemite. MacRumors will provide live coverage of the event.

Of course initial supplies will be limited. It's part of the plan to build hype for a product that no longer creates the hype it did a couple of years ago.


I can't believe people still peddle this garbage. Apple doesn't need to constrain supply to create demand. And if iPad is now a product people don't much care about, seeing that it's delayed isn't going to make them start caring.

This research note is just the typical pre-event let's throw things against the wall and see what sticks.
Score: 17 Votes (Like | Disagree)

AppleScruff1
Of course initial supplies will be limited. It's part of the plan to build hype for a product that no longer creates the hype it did a couple of years ago.
Score: 12 Votes (Like | Disagree)

CmdrLaForge
As long as the Mac mini gets an update as well I am fine... A little bit a shame that only the 27" iMac gets updated and not the 21". I would like :apple: to make a 24" again as to me that was the perfect size. 21" I a little to small where for me the 27" is to big

I expect that one shouldn't have to wait for 3 or 4 months to walk into an Apple store and be able to buy any size, capacity or color that they wanted. They are launching in new countries while people in the US still haven't gotten the phones they ordered two weeks ago. I don't see that as a good launch where the consumer is concerned.

OK. Two real options:
-Increase the price for the first few months to lower demand, and let people know that the phones will be available for $50 or $100 less in three months.
-Stockpile devices for additional months before offering them for sale, which would mean making *everyone* wait (instead of just some people), and would increase the cost of the phones because of additional warehousing expenses.

Which would you prefer?

Then they need more factories.

OK, cool. So your choice is to increase the costs of production (and, therefore, the cost of the phone) by opening new factories and hiring more workers for a temporary demand surge.

You can't just hire more workers temporarily for "free." There are high fixed costs in opening factories, hiring and training workers, and so on. If they would be needed for a substantial portion of the product cycle it would make sense. But they're not.
Score: 9 Votes (Like | Disagree)
Read All Comments