Apple may be planning to launch a slightly refreshed line of 15-inch Retina MacBook Pros complete with faster Haswell processors and 16GB of RAM standard, according to a photo said to have come from the company's Chongqing, China store (via BBS Feng, Google Translate). 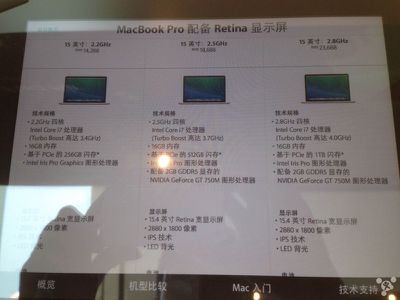 The purported pricing chart shows two standard configurations priced at 14,288 yuan and 18,688 yuan, which is the same as Apple's current pricing for its 15-inch notebook line in China. If real, this pricing chart would indicate that Apple would keep its current pricing instead of offering each new model for less as done for the MacBook Air earlier this year.

MellowFuzz
I'm more bothered by the ever growing list of Apple products that look increasingly semi-abandoned.

Apple should have had a 20" laptop workstation by now.
Score: 8 Votes (Like | Disagree)

Quu
If this is true I'm disappointed they haven't upgraded the 750m to the 850m. It has been 278 days since the last update and other manufacturers have been shipping 8xx series GPU's on their notebooks for months. :(
Score: 8 Votes (Like | Disagree)
Read All Comments