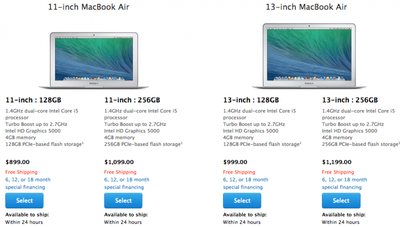 Build-to-order options include a 1.7 GHz dual-core Intel Core i7 processor with up to 8GB of RAM on both the 11-inch and 13-inch MacBook Airs.

Apple is also rumored to be working on a 12-inch MacBook with a new ultra-slim design and a high resolution Retina display for later this year.

The updated 11-inch and 13-inch MacBook Airs are available today through Apple's various retail locations and online store, with all standard configurations showing availability of "within 24 hours."

Update 1:28 AM: Apple's updated MacBook Airs are now available in its U.S. Online Store with each model now costing $100 less compared to the previous model.

Update 6:08 AM: Apple has issued a press release announcing the minor update.

“With MacBook Air starting at $899, there’s no reason to settle for anything less than a Mac,” said Philip Schiller, Apple’s senior vice president of Worldwide Marketing. “Macs have never been more popular, and today we’ve boosted the performance and lowered the price of MacBook Air so even more people can experience the perfect everyday notebook.”

The press release also highlights the significant increase in battery life for movie playback through iTunes.

Apple's updated MacBook Airs are now available in its U.S. Online Store with each model now costing $100 compared to the previous model.


Well isn't that just the most fantastic deal ever.
Score: 15 Votes (Like | Disagree)

mad3inch1na
Hopefully the price drop is indicative of a major lineup refresh!
Score: 14 Votes (Like | Disagree)

Michael CM1
Take that $100 price drop and put it into 8 GB of RAM. You may not really need it now, but that day when you do and you can't upgrade it, ouch. I could probably get by on 128 GB of storage since I don't think I would plan on this being my primary computer. But I could always attach a TB external drive. I can't attach external RAM.

Alas, since I'm broke and can't really justify a new notebook with a Windows one that's working fine for the $250 it set me back, this is just eye candy. I also don't want to buy when I know retina models are in the pipe in the near future.
Score: 10 Votes (Like | Disagree)

Frizers
those prices are very appealing
Score: 9 Votes (Like | Disagree)
Read All Comments