Earlier this year, Nike significantly downsized its FuelBand team, firing several members of the 80-person team that worked to create its well-known fitness tracker as part of a shift from hardware to software. 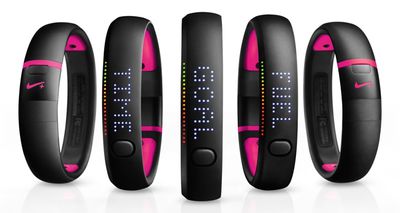 Primary responsibility is to define both the hardware and firmware architectures for Nike Digital Sport products. Additionally, I managed the development of product firmware through partner companies. Responsible for delivering firmware to validate the design in a manufacturing environment, define and implementation of custom protocols to interact with other components of the Nike ecosystem, and translate high-level product requirements into actionable, testable definitions. I personally owned the delivery of firmware for the Nike FuelBand product line.

It is unclear if Gale and Bailey have joined Apple's wearables team to work on the iWatch, but it is a distinct possibility given their expertise on wearable devices. Apple offers many positions under the job titles of Mechanical Design Engineer and Sensing Systems Engineer, however, so it is unknown exactly what the two are working on.

Over the course of the past year, Apple has hired several experts in the health and fitness fields to join its iWatch team, including fitness guru Jay Blahnik, sleep expert Roy Raymann, pulse oximetry expert and former Chief Medical Officer Michael O'Reilly, and several other scientists and executives from notable sensor companies like AccuVein, C8 MediSensors, and Senseonics. Most recently, the company took on the former sales director of luxury watch brand TAG Heuer, Patrick Pruniaux, possibly to help market the iWatch.

According to a recent report from The Wall Street Journal, Apple's upcoming wearable device will feature 10 different sensors to track various health and fitness metrics. It's said to integrate heavily with the Health app in iOS 8, and it may come in both multiple sizes and multiple designs to satisfy a wide range of tastes. Apple is expected to introduce the iWatch at an October event.

RealKrS
All I read in this tittle is: Apple Is Nowhere Near Releasing iWatch.
Score: 11 Votes (Like | Disagree)

Sounds more and more like it will be announced this year but not released until 2015. Which is fair enough.

So Apple hired some of the few people that Nike thought were not worth keeping?


If they are hardware engineers why would Nike keep them? Nike is giving up on hardware.
Score: 5 Votes (Like | Disagree)

farewelwilliams
tim cook is the eric schmidt in nike's board room?
Score: 5 Votes (Like | Disagree)

The Barron
Apple getting its ducks in great order

Apple is very wise to get the best in very specific niche areas of technology for all of its products - near or into the future.

This is exactly why the other "wanna bes" continually chase, file meaningless law suits & have to resort to silly, "who cares?-type ads in an attempt to bash Apple.

All I read in this tittle is: Apple Is Nowhere Near Releasing iWatch.


Companies also hire additional personnel for future versions of their hardware. These hires say nothing about the status of a rumored iWatch.
Score: 4 Votes (Like | Disagree)

let's hope the iWatch has wireless charging and is waterproof. both are likely deal breakers for me. Having to take out and charge *another* device will just get annoying.
Score: 3 Votes (Like | Disagree)
Read All Comments