Over the course of the last year, Apple has made several hires from the medical and sensor field, presumably to bolster the team of experts working on its much-rumored smart watch project, and MacRumors today learned of another high-profile sensor expert that has joined the company.

Michael O'Reilly, M.D., formerly the Chief Medical Officer and EVP of Medical Affairs at Masimo Corporation, left his position in July of 2013 to take on a role at Apple, possibly on the iWatch team. News of O'Reilly's employment at Apple was first leaked to MobiHealthNews last week and when contacted for comment earlier today, Masimo told MacRumors it "could not dispute" what had been reported.

While O'Reilly was at Masimo, the company developed several cutting edge pulse oximetry devices, including the iSpO2 Pulse Oximeter that connects to the iPhone and gives readings via an accompanying app. The iSpO2, which takes its readings from a finger, is designed to measure both oxygen saturation in the blood and pulse rate, with technology that allows it to take readings during movement and with low blood flow. 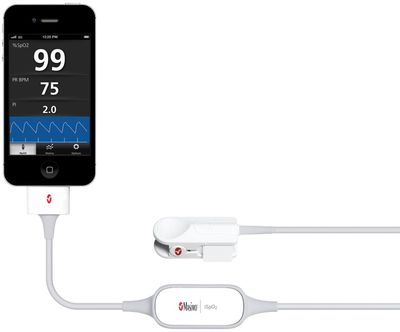 The iSpO2 Pulse Oximeter for iPhone
While it is not clear what position O'Reilly holds with Apple or how his pulse oximetry expertise will be used by the company, he does join a number of other hires in the medical field that have reportedly been recruited for the iWatch team. In 2013, Apple hired several scientists and executives from notable sensor companies like AccuVein, C8 MediSensors, and Senseonics, and two weeks ago, another report pointed to two additional hires in the sensor field.

Reports have suggested that Apple's smart watch project, the iWatch, could focus heavily on health sensors and biometrics, possibly including features like a pedometer and a heart rate monitor. Apple's multitude of hires in the health field does suggest, however, that the company could include even more advanced sensor technology in the iWatch or in a future product.

Sky Blue
damn! this iwatch is going to be a mobile hospital!
Score: 6 Votes (Like | Disagree)

I hope people can understand the potential of this product by now.


Yeah, the sad part is that people still don't. 'Watches are useless'. Good thing Apple actually has intelligent, imaginative people working for them, as opposed to the people who can't even think past 'It tells time'.
Score: 5 Votes (Like | Disagree)

The only thing I don't understand is whether or not this will be stand-alone device or not.

The only thing? Nobody knows any thing.

damn! this iwatch is going to be a mobile hospital!

Just wait till you see the prostate exam app!
Score: 5 Votes (Like | Disagree)

it seems that the watch is not nearly as close to being finished as i would have hoped. if they are still hiring people for sensors they can't possibly be finished with the design or testing of the watch. hopefully they speed things up! :apple:


Note though that the hire was supposedly made last July.
Score: 3 Votes (Like | Disagree)

I hope it doest require a probe :eek:

At last, the penny has dropped for the watchers.

The iWatch may well have some form of simple monitoring, but I reckon Apple is going much further into the medical field.

Already iPads are used extensively in hospitals for displaying scan and x-ray results. Integrated medical systems could be the next big field for Apple, just as instrumentation was for Hewlett-Packard in the 1960s. Could stray into Agilent (http://en.wikipedia.org/wiki/Agilent_Technologies)'s backyard.


I suspect you are onto something This is why I thought Apple might make a play for the remnants of Kodak, with their medical imaging products and patents.
Score: 2 Votes (Like | Disagree)

iLondoner
At last, the penny has dropped for the watchers.

The iWatch may well have some form of simple monitoring, but I reckon Apple is going much further into the medical field.

Already iPads are used extensively in hospitals for displaying scan and x-ray results. Integrated medical systems could be the next big field for Apple, just as instrumentation was for Hewlett-Packard in the 1960s. Could stray into Agilent (http://en.wikipedia.org/wiki/Agilent_Technologies)'s backyard.