Apple appears to have made another important iWatch-related hire as the device's rumored debut approaches, with CNBC reporting that the company has poached the sales director of luxury watch brand TAG Heuer.

The hiring was revealed by Jean-Claude Biver, head of Jewelry and Watches at TAG Heuer's parent company LVMH. Biver had claimed earlier this year that Apple had been trying to hire some of his employees but at that point none of them had agreed to join Apple.

Biver said the watchmaker's sales director left as recently as last week, "to take a contract with Apple" in order to launch the iWatch. LVMH owns Swiss watchmakers TAG Heuer, Hublot and Zenith. [...]

Biver said he was happy for the employee as the new role represents a great opportunity for him.

"If it had been a direct competitor, I would have felt a bit betrayed, but if he goes to Apple I think it is a great experience for him," he said. 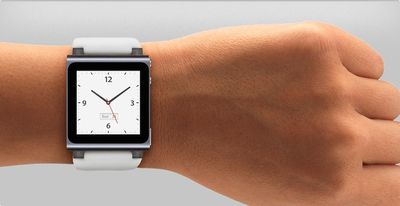 Sixth-generation iPod nano in watch mode
With Apple reportedly looking toward an October introduction for the iWatch, the company is building a formidable team with experience in the fashion industry.

At the top of that list is new retail chief Angela Ahrendts, who officially joined the company two months ago from Burberry. In another high-profile move, Apple last year hired Paul Deneve, CEO of French luxury label Yves Saint Laurent. Deneve reports directly to Apple CEO Tim Cook and is working on "special projects" for the company, with most speculation centering around the iWatch.

iBlazed
It would be hilarious if the iWatch was a huge trolling campaign by Apple and they're actually not planning on releasing anything remotely similar.
Score: 33 Votes (Like | Disagree)

How is it that people still misunderstand the fact that when Apple aims at a new product segment, they ARE the competition and usually take over that segment?!?!?

This just shows how out of touch this hiring manager was that said this.


Lol to anyone who thinks Apple or wearables will take over the luxury watch segment.

It's going to be massive; massive in price that is. The common iPhone customer won't be able to afford/justify it.


We don't know that, but I think it's safe to say it won't be a clone of the current crop of smart watches (i.e. notifications on your wrist).
Score: 24 Votes (Like | Disagree)

Appl3FTW
The iWatch team is like the avengers of fashion industry... Wow they're going all in. Iwatch will be massive
Score: 23 Votes (Like | Disagree)

It would be hilarious if the iWatch was a huge trolling campaign by Apple and they're actually not planning on releasing anything remotely similar.


It would be hilarious if someone didn't bring this up every time there is an iWatch rumour article.
Score: 22 Votes (Like | Disagree)

This iWatch thing is going to be pricey everyone.
Score: 22 Votes (Like | Disagree)

How is it that people still misunderstand the fact that when Apple aims at a new product segment, they ARE the competition and usually take over that segment?!?!?

This just shows how out of touch this hiring manager was that said this.


I'm not sure if you're familiar with TAG, but trust me on this, NOONE is going to be torn in choosing between the 2. Completely different ball game , target audience, price point and features :)
Score: 13 Votes (Like | Disagree)
Read All Comments