iWatch Coming in Multiple Sizes With More Than 10 Sensors

Apple will launch multiple versions of its highly-rumored "iWatch" smartwatch in the Fall, according to a new report from the The Wall Street Journal. The device is said to come in multiple screen sizes and will utilize over 10 sensors to track health and fitness, with Apple aiming to go beyond the smartphone-related functionalities seen in current smartwatches.

Apple's smartwatch could launch as early as October with production to begin in two to three months at Quanta Computer Inc., a Taiwanese manufacturer that has long been Apple's supplier for Mac computers, said the people familiar with the matter. Quanta will begin some trial runs next month.

In total, sources familiar with the matter estimate that Apple will ship between 10 and 15 million units by the end of the year, as the company is still finalizing specifications before mass production starts.

The report adds additional data to a report from Reuters which claimed that the iWatch would measure in at a surprisingly large 2.5 inches diagonally, and feature wireless charging capabilities in addition to a touch interface. While the new report doesn't contradict the Reuters piece directly, it's not clear if the 2.5-inch screen will be one of the "multiple versions" of the watch that launches this Fall. Previous rumors had suggested that the device would come in a 1.3 and 1.6 inch sizes to accommodate different sized wrists.

Apple is expected to introduce the iWatch at an October event, with a launch coming in the same month.

Klae17
I'm sorry, but according to my sources, the iWatch will look something like this: 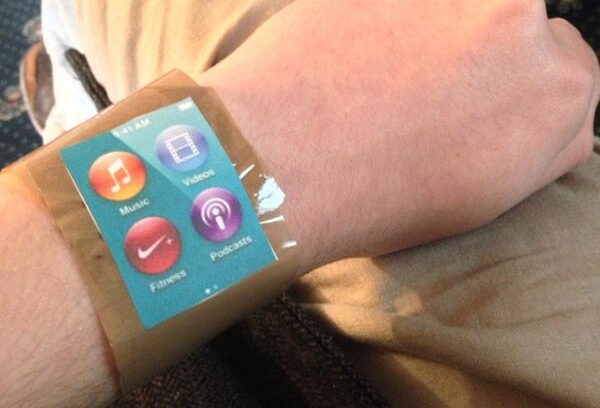 I still haven't bought an iPad... won't be getting this.

I did purchase an iPad and I do intend to purchase the purported "iWatch", so, yeah, thats my contribution to this thread.
Score: 11 Votes (Like | Disagree)


* Apple has done staggered roll-outs before focussing first on the US and UK. It is likely that they will do so again.
* The market for iWatches is likely to be much smaller than that for iPhoens and iPads.
* You have got no idea about the production scale that Apple has set up.

The other factor to consider, is that unlike the iPhone and iPad, Apple doesn't have to announce the iWatch and worry about it canabilizing existing product sales.

When Apple announces iPhone 6, they have to start shipping it ASAP, since iPhone 5S sales will tank.

The iWatch is a new product line, so they can announce early and ship it later. It also helps prevent production line leaks... that's how they did the original iPhone announcement (6 months ahead) and original iPad announcement (2 months before shipping).

As the gyroscope and accelerometer detect some movement.

Siri: "It looks like you are jerking off again, do you want me to google 60 plus matures again on your iPad...?"
Score: 5 Votes (Like | Disagree)

CartoonCat
Is it really possible to surprise people anymore? People have such high expectations today it's almost impossible to satisfy anyone. When Apple finally reveals the "iWatch" will people be in awe, or just...What? that's it, that's all you got? Meh!
Score: 5 Votes (Like | Disagree)

If you go back on Macrumors and look up comments (be warned, its scary) right after the first iPod, first iPhone (actually, every iPhone), iPad, Apple TV......um, basically any announcement no one is every happy and as soon as the doors open for launch the lines stretch around the block and Apple has record sales.

Basically what I am trying to say is I don't know why I come to MacRumors, this crowd is already judging and saying they will not buy a product that hasn't even been announced yet, we can't even wait for it to become a thing for us to hate, we just hate it preemptively.


You've summed up a problem on these forums really well. People are so incredibly negative. They moan that Tim Cook hasn't unveiled a new category, but when something like Swift is announced the comments read 'you can't give him credit for that it's been in production for years'.
Score: 4 Votes (Like | Disagree)
Read All Comments

Friday April 9, 2021 7:19 am PDT by Hartley Charlton
As many as 68 percent of iPhone users are expected to deny advertisers permission to track them thanks to Apple's App Tracking Transparency feature, in what is beginning to look like a significant blow to the advertising industry (via AdWeek). With the launch of iOS 14.5, apps will have to receive explicit user permission before accessing an iPhone's advertising identifier or IDFA, which is...
Read Full Article • 112 comments

Friday April 9, 2021 4:58 am PDT by Sami Fathi
According to market data compiled by Counterpoint Research, Apple's smallest iPhone since the 2016 iPhone SE, the iPhone 12 mini, struggled to obtain a spot in the top five list of best-selling smartphones in January of this year. According to the market data, the iPhone 12 mini came in eighth place for the best-selling smartphone worldwide in the first month of the year. However, the iPhone ...
Read Full Article • 247 comments