Ahrendts will take on the role of Senior Vice President of Retail and Online stores, a position that has seen significant turnover in recent years. Back in 2011, Ron Johnson left the position to join J.C. Penney after 11 years with Apple and while the role was filled by John Browett in 2012, he was ousted just months later. Since that time, Apple has operated without a retail leader.

Angela is responsible for the operation and expansion of Apple retail and online stores, which have redefined the shopping experience for hundreds of millions of customers around the world. Apple retail stores set the standard for customer service with innovative features like the Genius Bar, personal setup and one-to-one personal training to help customers get the most out of their Apple products.

Back in October, when Ahrendts' hiring was first announced, Apple CEO Tim Cook noted he was "thrilled" she was joining the team, emphasizing that she shared Apple's values, "focus on innovation," and the company's dedication to customer experience.

Prior to joining Apple, Ahrendts served as CEO of Burberry beginning in 2006. She is largely credited with boosting Burberry back to fame after a decline, tripling the company's revenue and working to merge Burberry's online experience with the brick and mortar experience.

With her luxury brand experience and her dedication to improving customer experience, it's possible that Ahrendts could bring some significant improvements to both the online and retail shopping experience at Apple, at a time when the company is poised to launch several new flagship products, including the iPhone 6 and the iWatch.

Also, it's nice to see a diverse team of minorities at Apple... :rolleyes:


It's quite obvious apple isn't run by any prejucistce, so they hire people who are right for the job, hiring a minority just cause they are a minority is still racism in its self.
Score: 33 Votes (Like | Disagree) 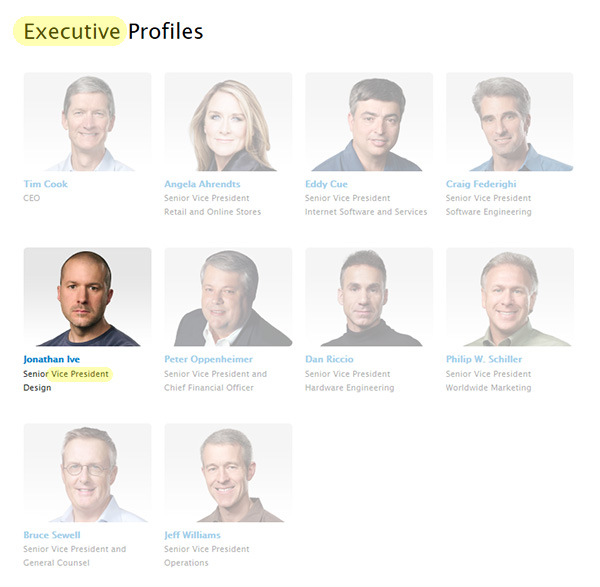 What exactly is wrong with the shopping experience? I hope she doesn't make it all girly. Steve Jobs was definitely on the manly side of taste.

Yeah, totally. :rolleyes: Give it two months and every Apple Store will be pink, with dolls and motherhood training. Because that's how girls work. Good job on realising this. :rolleyes:

And you need to lay off the nasty, superficial comments. Since we're naming ages, I imagine you're 12 or 13?
Score: 12 Votes (Like | Disagree)

Honestly, it wouldn't surprise me. Style over substance.

She's amazing. Look her up on YouTube and TED. And look at her results with Burberry. She operates from a place or meaning, values and respect and gets amazing results. She's very inspiring and motivating. No substance? She truly thinks different and I expect her to fit in very well in Apple's culture.

what exactly is wrong with the shopping experience? I hope she doesn't make it all girly. Steve jobs was definitely on the manly side of taste.

MH01
Someone in MR staff has the hots for Angela big time, never seen so many articles about a person joining apple before. We get it..... Angela is moving to Apple, but do we really need weekly updates ?? Hardly a rumour now ;)
Score: 8 Votes (Like | Disagree)
Read All Comments

Saturday April 17, 2021 4:43 am PDT by Sami Fathi
Reliable leaker known as l0vetodream has hinted that Apple may debut its rumored redesigned and colorful iMac at its "Spring Loaded" event on Tuesday, April 20. In a tweet, the leaker posted an image of Apple's logo used for marketing the upcoming event and an image of the retro rainbow Apple logo alongside the colorful lineup of G3 iMacs. Apple leaker Jon Prosser previously reported that...
Read Full Article • 272 comments

Monday April 19, 2021 6:37 am PDT by Hartley Charlton
Apple is planning to launch a new entry-level iPad, iPad mini, and iPad Pro at its "Spring Loaded" event tomorrow, along with "a few surprises," according to Wedbush analysts. In a new note to investors, seen by MacRumors, Wedbush analysts Daniel Ives and Strecker Backe explained that the iPad will be the main focus of Apple's "Spring Loaded" event, with new entry-level iPad, iPad mini, and ...
Read Full Article • 177 comments

Monday April 19, 2021 11:30 am PDT by Juli Clover
The upcoming 12.9-inch iPad Pro will be thicker than the previous-generation version, likely due to the inclusion of the mini-LED display. We've heard several rumors about the change in thickness, and now leaked design images have confirmed it. A source that designs accessories for Apple devices sent MacRumors a series of photos that feature exact dimensions for the new iPad Pro models, and...
Read Full Article • 201 comments