Research firm Kantar Worldpanel has released a new report (via TechCrunch) highlighting worldwide smartphone sales over the January-March period, finding that Apple has regained share in markets such as Europe, Japan and Australia due in part to the strong sales performance of the iPhone 5s. 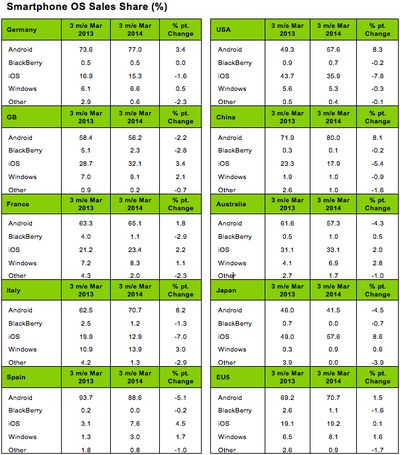 Dominic Sunnebo, strategic insight director at Kantar Worldpanel ComTech, comments: "Apple regained ground in the first quarter of 2014, primarily due to the strong performance of the iPhone 5S, growing its sales share in Europe, Japan and Australia. By contrast, Windows had a tough start to the year as a result of its entry-level Nokia models facing fierce competition from low-end Motorola, LG and Samsung Android smartphones."

However, Sunnebo noted in a prior Kantar report highlighting smartphone sales over the August-October 2013 period that customers in the U.S. generally react better to "full releases" like the iPhone 4 and iPhone 5 than "incremental" updates such as the iPhone 5s and the iPhone 5c. Apple is expected to release a larger-screen iPhone 6 this year with new features including a thinner profile, faster A8 processor, Touch ID fingerprint sensor, and an improved camera with optical image stabilization.

Meanwhile, the iPhone's surging popularity in Japan has continued in the months following its debut on the country's largest carrier, NTT DoCoMo:

Sunnebo continues: "Japan’s love affair with Apple shows no sign of fading. Even though the iPhone has now been available on Japan’s largest carrier, NTT DoCoMo, for a number of months Apple still accounts for more than 40% of sales on the network. The success of the iPhone is also filtering through to the iPad, with almost a quarter of Japanese iPhone owners also owning an iPad. With smartphone penetration in Japan lagging well behind Europe and the US, Japan will remain a key growth market for Apple."

Despite its solid market share in numerous countries however, the iPhone continues to face challenges from Google's Android platform, which had its market share continue hover above 70% in many markets. Microsoft's Windows Phone also increased its market share, with the platform even holding a 4.3% advantage over iOS in Italy.


I apologize for the error! I've been going back and forth between "market" and country" too often, it's been fixed now!
Score: 14 Votes (Like | Disagree)

I honestly thought that Apple's market share in Japan was around 70 percent or something.

It seems that Apple's market share in most countries is decreasing rather than increasing so the headline is misleading.

But from the earnings report, that's not a huge problem, as the overall number of iPhones sold has increased and Apple is still raking in more money than anyone else.
Score: 14 Votes (Like | Disagree)

Actually, Android looks more and more like the '90s Windows. It was inspired by Apple, is generally cheaper and now dominates the market. And just as with that PC analogy, for many people iOS still offers a better experience.
Score: 11 Votes (Like | Disagree)

Michael Scrip
I wish there was some other way to illustrate smartphone market share.

Right now it's broken down by platform... which seems like a good idea on the surface. Some companies are the platform... in the case of Apple and Blackberry. And Windows Phone is primarily Nokia at this point.

But then there's "Android"

The problem is... any phone running a version of Android is counted the same. It doesn't matter if it's a $599 flagship like the Galaxy S5... or a $59 el-cheapo phone sold in a developing nation. They all get the same credit. There is no distinction between various levels of phones.

Many industries have specific classifications of products. The automobile industry is a prime example.

Nobody compares sales of luxury sedans to sales of econobox hatchbacks... do they? Of course not. There are many different segments of the automobile industry.

But in the smartphone industry... everything is lumped together under one segment. It just seems weird.

And yet... Apple is compared to companies who only sell phones under $400

That doesn't make a lot of sense.
Score: 10 Votes (Like | Disagree)
Read All Comments