iPhone 5c Broadens Apple's Customer Base, but Android Continues to Lead in Smartphones

Monday December 2, 2013 6:36 am PST by Richard Padilla
Research firm Kantar Worldpanel has released a new report (via TechCrunch) highlighting global smartphone sales over the August-October period, finding that Apple's market share in most regions is unsurprisingly now higher when compared to the months leading up to the release of the iPhone 5s and iPhone 5c. Apple's share is, however, lower when compared to the prior-year period with the iPhone 5 launch. 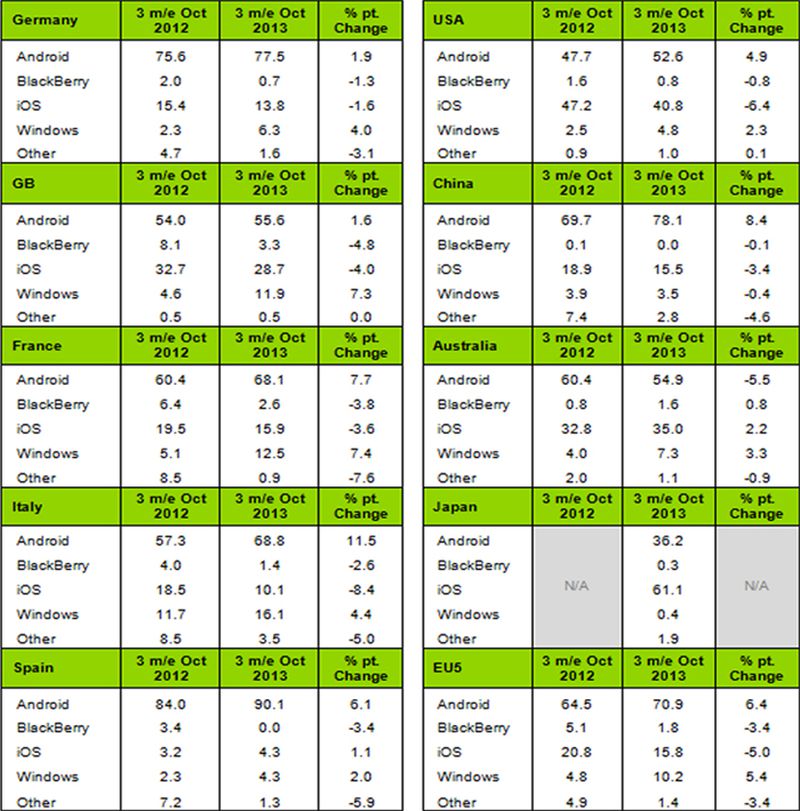 Dominic Sunnebo, strategic insight director at Kantar Worldpanel ComTech, comments: “In almost all markets, the iPhone 5S and 5C releases have given iOS a significant bounce compared to the previous month. Generally, Apple’s share of the market still remains lower than when the iPhone 5 was released, although this is not wholly unexpected as shoppers tend to react more positively to ‘full’ releases than incremental improvements such as the 5S and 5C.

Apple's total market share in the U.S. hit 52.8% during October, with the report attributing the overall growth during the 12-week timeframe to the appeal of the cheaper iPhone 5c and noting that half of all iPhone 5c owners had switched from competiting brands:

“The cheaper 5C appeals to a broader audience than Apple usually attracts. In the US, the biggest demand for these mid-end models is coming from lower income households. Some 42% of iPhone 5C owners earn less than $49,000 compared with just 21% for iPhone 5S. iPhone 5C customers also tend to be slightly older at an average of 38 years compared to 34 years for the 5S. The good news for Apple is that this wider appeal is attracting significant switching from competitors. Almost half of iPhone 5C owners switched from competitor brands, particularly Samsung and LG, compared with 80% of 5S owners who upgraded from a previous iPhone model.”

While the iPhone continues to enjoy strong market share in the U.S., it also continues to face challenges in mainland Europe and China, where Android's market share is around 70% or even higher in many countries. Apple has, however, had more success in Japan, where the addition of NTT DoCoMo as a carrier partner helped the iPhone garner 76% of the market in October and 61.1% for the broader August-October period.

ragermac
I have long left the iPhone for android and will never go back. I own several macs at home but I am very tired of the closed in nature of IOS products. My Note II is better than the iPhone is pretty much every way. I have 64gb storage, complete file access, googlemaps, customization, changeable battery, the build quality is great (sure it is not aluminum, but I have dropped it several times and no cracked screen, I see so many cracked iPhones it is ridiculous.

I love the large screen and the true multitasking. I have converted several of my friends to android and it is almost like there eyes were opened. I still love my iPad, but only because it is jailbroken. You can't even upload a file natively other than photos to your email or on a website on an IOS device!!

Once I find an android tablet that has a complete smooth UI and the build quality of the iPad I am leaving it behind. If only apple would design a tablet that is suited more for the power user that includes a stylus, but I guess they don't want to stick to steve's vision. Too bad.
Rating: 15 Votes

gcliv
I recently switched from iPhone to Android. I don't know why I waited so long - lots more innovation and choice on this side of the fence. Moved my parents over this weekend as well - they are also thrilled

I used to be 100% in the Apple ecosystem with laptop, phone, and tablet. Apple's lack of innovation (ever-thinner is no longer a suitable upgrade feature) is going to start to see the loss of a lot more people.
Rating: 15 Votes

JaySoul
The strategy outside of the USA needs work, Apple.

Try reading MacRumors once in a while, we have all the answers.
Rating: 13 Votes

The strategy outside of the USA needs work, Apple.

iOS devices are priced at least double that of their Android competitors. In the US, this price difference is masked by carrier subsidies, which aren't given in Europe.

Either Apple can come down significantly on price to compete in volume, or they can continue to let iOS marketshare dwindle away and be happy being a premium brand. It's Mac vs. Windows again.
Rating: 12 Votes


This pretty much covers it. The iPhone is more expensive with no real benefit when Android and Windows Phone can do exactly the same stuff for less and more expandability.
Rating: 11 Votes

PinkyMacGodess
Android leads because there are more different models from more different companies, which has the big negative of creating a fragmented user base.
Rating: 10 Votes

Hastings101
Apple had a nice monopoly on modern smartphones that gave them an edge early on but that's over. Apple's two or three iPhones can not compete with the massive amounts of phones produced, and sold at several price points, by the Android vendors or even just the variety of phones produced by Samsung.

That's just the truth. Not saying that's a bad thing, Apple can still make "record profits" or whatever and be the wealthiest tech corporation in the world, but I think the market share war is over (if there ever really was one). They're eventually going to be the Macintosh of the mobile world and sell goods with a high profit margin to 10-20% of the population.

All my opinion of course, this is a forum after all :p
Rating: 9 Votes

NightFox
Why do so many people feel the need to defensively explain these stats away, e.g. saying there are far more different/cheaper Android devices than there are iOS ones? The reason isn't the point - the point is that Apple are losing smartphone OS dominance and with it goes their influence and that's a bad thing for those of us who are staying with our iPhones, for a couple of reasons:

A couple of years ago, the big developers were focussed on iOS, and iPhones got the killer apps that maybe made it onto Android months later, if even at all. But that's changing, developers are going to develop for the largest, most lucrative market first and foremost. I reckon that within the next 1-2 years we're going to be seeing people switching from iOS to Android driven by availability of must-have apps.

Previously, Apple could call the shots. If it introduced a new technology with the latest iPhone it soon became the defacto standard by default; everyone would clamber to embrace it as they couldn't afford not to. But times have changed and developers are no longer seeing iOS technology integration as a "must-have". Take Passbook for example - if iOS was still the dominant mobile OS then we'd have every man and his dog supporting it and it would potentially have become an industry standard across the travel and entertainment sectors. Instead, developers are not seeing the point of incorporating a legacy system that's unique to an OS with a reducing penetration.

Sadly with Android not being as joined up and thus not being in as good a position to exert its influence, I think innovation loses out, even if before hand it could only be Apple's choice of innovation.
Rating: 9 Votes


So numbers only count if Apple is ahead? Otherwise they are meaningless?
Rating: 9 Votes

Really? What Innovations does Android have that iOS lacks? Cause one of my coworkers was showing off his Nexus 5 and there wasn't anything that my iPhone 4S can't do.... And some things my 4S can do that his Nexus can't.

I did the Android thing and it was such a poor experience I doubt I'll ever go back. And that was on a new, great, hot Android phone.


How about the ability to send someone a file other than a photo natively, without the aid of an app? Or true multitasking, or external storage, or better maps or nicer screen size, customization, better sharing features, better keyboard choices, visible file system, better notifications, (apple realized this and copied) google now, (Siri is a joke), more free apps, unlock options, shall I go on.....
Rating: 9 Votes