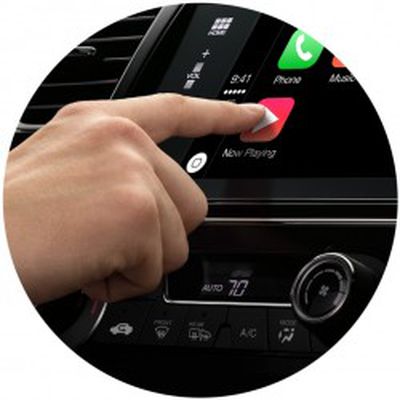 While a recent report from a customer service representative indicated that Pioneer was exploring the possibility of bringing support for Apple's new CarPlay iPhone vehicle integration to third-party dashboard systems and Mercedes-Benz acknowledged efforts to bring extend support to its own older vehicles, it appears that full support will take some time to appear given challenges involved in the implementation.

AppleToolbox spoke with both Volvo and Ferrari, two of Apple's launch partners for CarPlay, and both manufacturers acknowledged that extending compatibility to older vehicles would be difficult, with Ferrari ruling out the possibility and instead promoting its alternative phone integration systems.

The new system CarPlay is available only on new range cars and cannot be installed on older ones. However, since we know that infotainment solutions are really important for our customers and also owners of older vehicles deserve the same care as all other customers, we developed an AfterMarket product aimed at offering last generation infotainment, completely compatible with most recent phones.

Volvo does not appear to have ruled out older model support for CarPlay entirely, but acknowledges that it would be difficult for the company to add that support.

We have not announced any plans for an aftermarket solution for Apple CarPlay. While I cannot reveal any potential future products, I can say that there are major roadblocks for this, both from a technical as well as from a usability point-of-view.

And despite Pioneer's statement of interest earlier this week, which the company backed away from in a statement to AppleInsider, other third-party manufacturers are expressing reservations about whether they will even pursue CarPlay support. In an email to MacRumors, a Kenwood representative indicated that the firm would be "looking at" CarPlay but that adoption is not imminent.

I can tell you Apple CarPlay won't be in any of our 2014 product. We will be looking at this operating system along with Google's.

I haven't had any discussions with our engineers regarding Apples willingness or unwillingness to extend into aftermarket.

Currently our [radios] support many of the features found on Apple CarPlay including SIRI control, AV content and even Navigation Apps, so perhaps this interface will have more of an impact with OEM systems that lack that kind of connectivity?

It's clear that there remain a number of unknowns regarding CarPlay, and it seems that Apple has not kept third-party manufacturers abreast of its plans. As a result, it may yet be some time before those manufacturers can have proper discussions with Apple and explore just what it would entail to add CarPlay support to their products.

aswiec
Can someone please explain to me what specific "Technical Hurdles" they might have to overcome? Shouldn't it be as easy as installing a new touch screen radio will a cord that you can plug your iPhone into? It doesn't seem that difficult to me.
Score: 16 Votes (Like | Disagree)

dacreativeguy
You'd think Apple could just let users enable a CarPlay mode on their phones and iPads to get the car interface. Who needs a new head unit!

But that would be toooooo easy and not generate more money :(
Score: 6 Votes (Like | Disagree)

JAT
Shoot, guess I'll have to get a new Ferrari.
Score: 5 Votes (Like | Disagree)

Boatboy24
What I'm reading is that carmakers are agreeing to put this into their new vehicles as long as Apple doesn't license the thing to the Pioneers and Kenwoods of the world; effectively forcing anyone who wants this to buy a new car, or an aftermarket version of CarPlay from an auto manufacturer.
Score: 5 Votes (Like | Disagree)

Can someone please explain to me what specific "Technical Hurdles" they might have to overcome? Shouldn't it be as easy as installing a new touch screen radio will a cord that you can plug your iPhone into? It doesn't seem that difficult to me.


First guess? Apple being mum on the API's and SDK's who aren't OEM's. Meaning, it will probably open up in time, but not this year. Next year's not looking too good either.

And I find it BS as an excuse to buy a new car, especially for those who got a new car in the last year or two.
Score: 5 Votes (Like | Disagree)

Don't expect car manufacturers to retrofit this into their existing models. Even if every customer agreed to pay $4,000 to have a CarPlay system adapted to their one to three year old car it would still suck. The dashboards, buttons and other design elements of the vehicle just wouldn't be right for this.


From the looks of the original models, we are talking about a double-DIN head unit in a conventional car, with steering wheel or other secondary controls for the common functions. This doesn't seem like a system it would be hard to build an aftermarket stereo to mimic (the steering wheel controls are hard, but you just use whatever controls are there already; the other secondary controls just need to be installed and wired up).


If they caved and offered it for existing vehicles I think it would generate a lot of ill will for the makers. It'd not be free, too expensive, too many headaches getting it installed and working well.


I doubt anyone would be upset that they would have to pay money to get a new stereo head unit, with large touchscreen display, etc.


The user will have a much better experience getting this in a new car that was designed from scratch to work with this system.


Um, no, probably not. OEM car stereos, across the board, suck compared to what can be gotten aftermarket. Yes, a new car might work better for someone than an old one, but just from the stereo system perspective, likely not.


Yes, exactly. That is why all the car manufacturers are claiming aftermarket devices will never work; their interest lies in getting you to buy a new car, not make the old one "habitable" by upgrading the stereo head unit.

Note that car manufacturers officially profess that after-market stereos don't work in their vehicles. That doesn't mean it is true. They just want you to see a modern stereo system as something you get when you buy a new vehicle.


If you don't like that concept maybe you should consider moving to North Korea.


And you get the Overreaction of the Thread award! Congratulations!
Score: 3 Votes (Like | Disagree)
Read All Comments