In its European Apple Online Stores, Apple has begun offering a 32-inch Sharp "4K" Ultra HD LED monitor. Retailing for £3,499.00 or approximately $5,700, the monitor has been available in the U.K. and other European countries since on or before November 30.

The 32-inch IGZO display, which has a resolution of 3840 x 2160, is not available in the United States and it is not clear why Apple has decided to offer it solely in Europe for the time being. 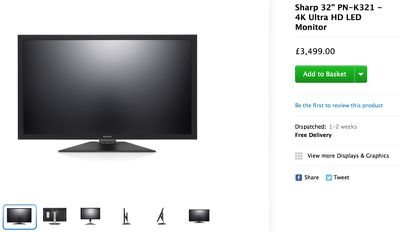 Sharp's LED display offers a 1.07 billion color palette, an 800:1 contrast ratio, and 350cd/m2 brightness. While it does come with DisplayPort support, it does not come with a Mini DisplayPort to DisplayPort adapter and will require users to purchase a third party adapter.

The appearance of the Sharp display in Apple's Online Store comes amid rumors that Apple is preparing its own 4K displays. Earlier this month, new display panels with DisplayPort appeared from AUO, sparking speculation that they could be used by Apple for a future 4K Thunderbolt display.

Dell debuted its own 4K Ultra HD displays earlier this week, offering a 32-inch model for $3,499, and a 24-inch model for $1,399. Dell also has a sub-$1000 28-inch model in the works for 2014, and as Apple and Dell have historically used the same panel supplier, Dell's offerings may provide an early look at what to expect when Apple does release its 4K displays.

Apple's recently refreshed Retina MacBook Pros are able to support a single 4K monitor and the upcoming Mac Pro is able to support up to three 4K displays. The Mac Pro may be on or near December 16, according to a German retailer that began taking pre-orders ahead of the product's launch, but it remains unclear when Apple might debut an updated Thunderbolt Display.

Update: Apple has removed the Sharp display from its online stores.

Robert.Walter
IMHO, this likely is a way for Apple to:
- test the 4k market strength and price points;
- give Sharp a market outlet as they try to bring yield rates up ahead of supplying screens for an Apple-branded product;
- capture a bit of the revenue stream associated with 4k (thus denying it from competitors) until an Apple-branded product debuts;
- create a comparator to be used to show how feature-rich an Apple-TV will be for a similar (but likely higher) price point;
- give customers the option of one-stop shopping for their new MacPro, or MacMini;
- other?

@sachinwalia: I think it is an Airport Extreme, or Time Capsule.

Is it me, or is this monitor really old-fashioned looking? lots of buttons, vents, sharp-corners and angles... (I couldn't see myself replacing my Thunderbolt Display - despite my desire for a sharper image - with this thing.
Score: 12 Votes (Like | Disagree)

Corrode
This seems to be in the price range of those who are also able to afford Thunderbolt peripherals.
Score: 12 Votes (Like | Disagree)

Nunyabinez
Does this portend that Apple will get out of the display market?
Score: 11 Votes (Like | Disagree)

Not buying my Mac Pro until Apple shows us what they have planned.

I'm hoping for 28"-30" 4k display from Apple @ $1000 - $1200. The current thunderbolt displays are extremely overpriced until they are updated with the new iMac design.


You will be waiting for a long while. Since the current regular display is $999, I doubt that the 4K will ever be in that price range.
Score: 9 Votes (Like | Disagree)
Read All Comments

Thursday September 29, 2022 7:44 am PDT by Juli Clover
The iPhone 14 Pro and Pro Max introduce some major improvements in camera technology, adding a 48-megapixel lens and low-light improvements across all lenses with the new Photonic Engine. We've spent the last week working on an in-depth comparison that pits the new iPhone 14 Pro Max against the prior-generation iPhone 13 Pro Max to see just how much better the iPhone 14 Pro Max can be. Subscrib ...
Read Full Article • 134 comments