With just a few weeks left in 2013, Apple's stock has finally rebounded to set a new 52-week high of $575.14 earlier today, although it has since pulled back by a few dollars. Apple's stock price peaked at just over $700 back in September 2012 before beginning a slide that took the price to under $400 by mid-April of this year. 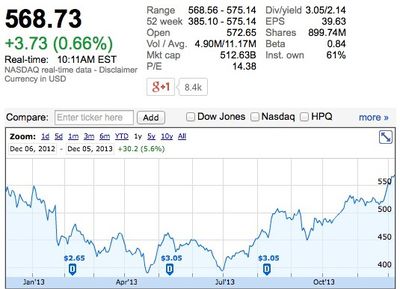 Apple's march back to yearly highs began in late June and has been a fairly steady climb since that time, although the last two weeks have been particularly good for the company's stock with a roughly 10% increase over that time as investors have been buoyed by new product releases and optimism surrounding Apple's Black Friday weekend sales.

The company's stock price has undoubtedly also been boosted by a stock buyback program that has seen Apple take roughly 5% of its shares off of the market since late 2012. Some argue that Apple should be doing even more to repurchase its stock, believing it to remain undervalued and thus a cheap investment for the company. Just yesterday, activist investor Carl Icahn, who holds roughly $2.5 billion in Apple stock, announced that he has filed paperwork requesting that shareholders be included in an advisory vote encouraging the company to increase its buyback plan by an additional $50 billion.

dannyyankou
Steve would've never allowed this to happen.
Apple is doomed.
Tim is destroying the company.

Reason077
What on earth are they thinking? Everyone knows Apple is doomed! Except these deluded investors, apparently.
Score: 10 Votes (Like | Disagree)

HenryDJP
Well sorry if it hurts you Lilo and the other Apple haters, but Apple is not dying like you seriously hope they do.
Score: 10 Votes (Like | Disagree)

neilw
I assume Tim Cook will get all the credit in the financial press for this stock recovery, just like he got all the blame when it dropped. Right?
Score: 9 Votes (Like | Disagree)

What concerns me most about Apple's future is they are losing market influence. The 80% Android number does matter for this reason.

Say a brick and mortar store decides to adopt some kind of smartphone payment system. Are they going to choose Google Wallet or Apple Passbook?

Wallet works on Android and iOS, Passbook only works on iOS. Passbook's market penetration peaks at ~16%, whereas Wallet's penetration can reach ~95%. This type of influence allows Google to shape the mobile market, in the same way Microsoft shaped the PC market.

If I'm a shop owner, I can serve both Android and iOS users by adopting Wallet, so why bother with the expense of also supporting Passbook? This will _eventually_ cause developers to not bother with iOS, and then iOS will become MacOS of the mid 90's.

Apple will need to either start to tightly integrate Google services into iOS, or they will need to open their services so they can be ran on Android. And that later approach would be extraordinarily tough, because they'd be fighting Google on Google's own turf.


Except there are some big differences from the Windows/Mac fight. First, the Windows PC market was pretty much a commodity, there were somewhat cheaper and somewhat more expensive PCs, but they all ran the same OS and were pretty much equivalent. With Android, there's a wide range of power and quality, going from higher end phones (this is the segment Apple competes in) to really low end phones that technically are still smartphones but in reality being bought to be feature phones. They stay at whatever version of Android it came with,use almost nothing but the basic phone features. There's no money to be made in this low end market and Apple doesn't even compete there. If the market shares were broken out by segment, Apple would do much better - this low end segment is the part of the market that's exploding, which is why Apple's sales can keep increasing while they lose market share.

Second, in part due to the the vast amount of low-end sales that make up the bulk of Android's market share, Apple's customers are more "valuable" to the ecosystem than Android customers are (on average). They spend more on apps, they buy more accessories. and they USE the phone a lot more. That means that developers want to develop for iOS first/only, because that's where the money is. Retailers want to provide support for iOS users, because they spend money.

Specialized services like Passport will be sporadically supported, granted. But general use, like making apps, that stores do. And there's a reason Google makes apps for all their services - they want the ad revenue they get from iOS users because those users will spend money on their advertisers.

So for iOS to go to irrelevancy, either Apple sales have to be dropping significantly (actual sales, not market share) or Apple users somehow have to agree en masse not to really use their devices much or buy stuff on/for it.
Score: 3 Votes (Like | Disagree)


I would hold it until january. Then sell it and profit.
There were too many product releases this quarter and sales are up... But next quarter will be poor on product launches and the market will get bored, so...:)
Score: 2 Votes (Like | Disagree)
Read All Comments

Saturday May 21, 2022 9:00 am PDT by Hartley Charlton
With around four months to go before Apple is expected to unveil the iPhone 14 lineup, the overwhelming majority of rumors related to the new devices so far have focused on the iPhone 14 Pro, rather than the standard iPhone 14 – leading to questions about how different the iPhone 14 will actually be from its predecessor, the iPhone 13. The iPhone 14 Pro and iPhone 14 Pro Max are expected...
Read Full Article • 241 comments