Wednesday September 25, 2013 10:18 am PDT by Jordan Golson
iFixit has already disassembled the new iMacs that were released yesterday. The teardown didn't reveal too many changes from the previous version, though there are a few new features worth mentioning.

Both the 21.5-inch and 27-inch models include the new 802.11ac wireless standard, while the 27-inch model includes the new PCIe-based flash storage that was originally introduced in the MacBook Air back in June. 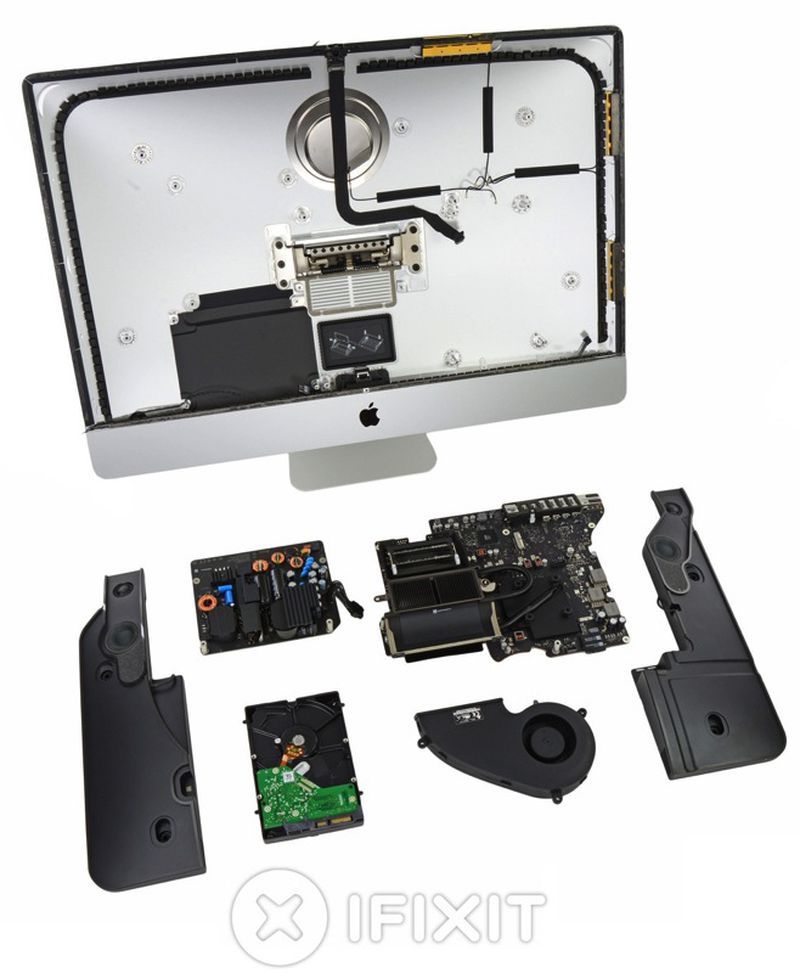 The 21.5-inch model has a few differences from its larger sibling, according to iFixit. It now includes a new empty PCIe SSD slot so users can upgrade the base model iMac to the Fusion Drive combination HDD/SDD drive that Apple introduced last year. In last year's 21.5-inch model, Apple did not include an empty PCIe slot on the logic board.

More disappointing, for users who like to upgrade their machines, is the fact that the CPU is soldered directly to the logic board, making an upgrade nearly impossible. iFixit gave the 21.5-inch model a 2 out of 10 for repairability, largely because of the soldered processor.

The 27-inch model received a 5 out of 10. The largest issue with upgrading the iMac is getting the glass and LCD panel out of the machine, making repairs impossible for all but the most determined do-it-yourselfers.

RobertD63
I don't remember it ever being feasible to swap or change CPUs?
Rating: 43 Votes

newdeal
I may want to consider buying a new iMac soon. Not because I like these models but because the old ones with the optical drive might be leaving the refurb store soon as more of these nonsensically thin models are released. I don't care if I use the optical drive often, I want it there because its a desktop and I don't care if it is thin or light
Rating: 24 Votes

I don't remember it ever being feasible to swap or change CPUs?


yeah the soldered cpu really makes no difference to anybody imo. Not sure who would buy an iMac, open it up, get dust between the glass and the screen to change out the cpu.
Rating: 20 Votes


Agreed. My early 2008 iMac is thick as a brick compared to the new models, but I don't care. As for weight, the only time I move it is when I'm dusting my desk, and it's no big deal to lift.
Rating: 16 Votes

PracticalMac
What happened to the Easy to Fix Macs?

Did that quite a few times, even on a few laptops.
PowerBook 500 and Pismo series CPU on daughter card, easy to update.


The folks that don't understand why someone would want to replace the CPU are too young to remember the days when you could easily repair a laptop, instead of just tossing it into a landfill and buying a new one.

Others are just too stuck on themselves to ever thing that folks not like them may want to upgrade or save money on repairs.


Yes quite relevant in fact. Unless you're someone that thinks anything not catering to Apple in a positive way is irrelevant.

Not only do they have repair guides to many Apple and electronics and automotive products, they offer insight and guidance (via forums and blog posts) to anyone that may one day want to learn how to build and repair their own systems.

What planet do you live on where a website that gives knowledgeable information about technology, in a tech driven society is irrelevant?

I guess it's still good for page clicks. Not sure how long it will take for people to figure out that Apple doesn't build things with the goal of getting a good score from iFixit.


I agree with the overall statement, but disagree with the way you seem to think that iFixit reviews products for the sole purpose of page clicks, while on the other hand MacRumors posts a story about iFixit for the same purposes.
Rating: 12 Votes

Woyzeck
Soldered CPUs are a non-issue, as I guess that only 0.001% of iMac owners even think about swapping their CPU.

Non-swappable RAM and harddisks, cases that you can't open any more without working through glue, desktops without a second drive bay, without an optical drive, with their headphone jacks on the backside just to be thin on the other hand are plain stupid.

Not to speak of magnetic disks in expensive computers.
Rating: 12 Votes

More disappointing, for users who like to upgrade their machines, is the fact that the CPU is soldered directly to the logic board, making an upgrade nearly impossible.


They're soldering things now? What, did they finally run out of glue? ;)
Rating: 11 Votes