Two months ago, Topeka Capital Markets analyst Brian White gained significant attention for his claims that Apple is targeting a late 2013 launch for its long-rumored television set. In his research note, White claimed that Apple has been working on a 60-inch television that will use an "iRing" motion controller as well as iPad-like auxiliary second screens.

In a new research note published today, White stands by his previous claims, continuing to believe that Apple is looking to service subsidies to help bring the upfront cost of the television set down.

We were told that carriers will be an important part of the go-to-market strategy for Apple's TV ambitions and subsidize the $1,500-$2,500 "iTV", offering customers a single bill that will include a wireless plan (i.e., iPhone, iPad), Internet connection services, an "iTV" plan and other services. As we have previously discussed, the 60-inch "iTV" (50-inch and 55-inch may also be available) is anticipated to come with one iPad-sized "mini iTV" with the option to add more "mini iTVs".

Such bundling may, however, be difficult given that customers frequently have different wireless carriers and cable or satellite television providers, although some providers such as Time Warner Cable and Verizon Wireless have teamed up to offer bundles of TV, Internet, home phone, and mobile phone service. 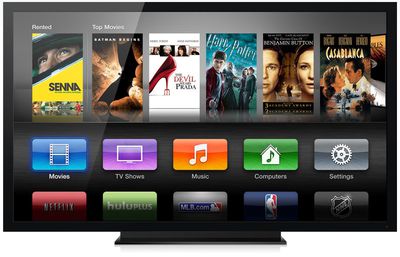 White goes on to describe his vision for how the TV will be controlled:

Motion detection technology will be used on the "mothership iTV" and the "iRing" will allow for improved control accuracy. For example, we believe the "iRing" will provide for more accurate control of channel surfing, content management and settings via motion detection, while also offering a more seamless gaming experience on Game Center. We were told that "iRing" will not be the sole option available to control the "mothership iTV", as iOS devices (i.e., iPhone, iPad) and Siri will provide alternatives for similar or different use cases. Clearly, there will be many different uses for "iTV" and similar to the various devices (i.e., remote, Magic Mouse, Magic Trackpad, wireless keyboard, etc.) that are used to control an iMac, we believe it makes sense for consumers to have different options to control the "iTV".

Finally, White believes that component production for Apple's rumored lower-cost iPhone will ramp up this month, setting the stage for a possible introduction as soon as next month. Most sources have, however, indicated that it will launch somewhat later, with KGI Securities analyst Ming-Chi Kuo indicating that a launch in the August-October timeframe is most likely due to Apple's continued work on color coatings for the device's plastic shell.

kas23
This iRing business sounds like such a bad idea. It needs to die, quickly.

"Guess what? I'm already wearing it!"

What drugs is this guy on?
Score: 3 Votes (Like | Disagree)

Pianoblack3
Well, the analyst knows where to stick his thoughts.
Score: 3 Votes (Like | Disagree)

SBlue1
Sounds great. Here are the things I would like it to have to consider buying a new Apple TV:

- CEC support. The Apple TV should be able to wake up the television. Its not very convenient to start the current Apple TV with its remote or the iPhone just to see that the TV remote is not on the couch and you have to get up again.

- Cheaper TV-Series. They are way to expensive at the moment.

- Direct support for iTunes libraries sitting on an external hard drive without the need to boot your Mac and start iTunes.

Anyone else have a sense of dread and embarrassment about this iTV impending colossal failure?!

69650
Subsidised iTV would mean an expensive monthly contract. For what? Can't see the mobile phone or cable companies going for that solution. If they can't build it for a reasonable price then don't bother and stick with the current AppleTV box.
Score: 2 Votes (Like | Disagree)
Read All Comments

Friday December 2, 2022 10:54 am PST by Juli Clover
Google is continuing on with its attempt to convince Apple to adopt the RCS messaging standard, publishing a new "it's time for RCS" blog post. Promoted heavily by Google, RCS or Rich Communication Services is a messaging standard that is designed to replace the current SMS messaging standard. It provides support for higher resolution photos and videos, audio messages, and bigger file sizes, ...
Read Full Article • 533 comments