Mac Otakara has released a report with new details on a number of upcoming products, including the rumored low cost iPhone, the iPhone 5S, and the iPad 5. Citing information from several different sources, the site suggests that the low cost iPhone may ship in a number of different colors and that it will begin trial production soon. 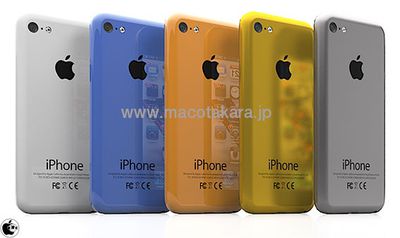 Rendering of low cost iPhone in multiple colors
Apple's rumored low cost iPhone is said to be targeted at emerging markets, carrying a price tag of approximately $350-$400 without subsidies. To facilitate a lower price tag, the phone is rumored to have a polycarbonate shell.

As for the iPhone 5S, Mac Otakara believes that it too will come in multiple colors. Previously, the site suggested that it would ship in three different colors, including the original black and white, but now says that additional colors might be offered, namely gold and green.

The design of the iPhone 5S is rumored to be largely the same as the iPhone 5, but Mac Otakara’s sources say that it will sport a dual-LED flash and that the rear microphone hole will become circular instead of pill shaped, placed between the camera and the flash. Before the launch of the iPhone 4S rumors suggested that it too might ship with a dual flash, but that did not happen.

Rendering of iPhone 5S dual-LED flash
Finally the site gives a small bit of information on the 5th generation iPad, suggesting that the extra hole that was seen in some iPad mini prototype cases and even an alleged iPad mini prototype will be added to the iPad 5. The hole did not make it into the final iPad mini design, but it has appeared in prototype iPad 5 cases as well, and Mac Otakara suggests that it is an additional microphone.

While the site does not give an expected release date for the iPhone 5S, it does note that the fifth generation iPad will ship after the new iPhone. Previous rumors have suggested that the iPhone 5S will be released in September or later.

The design of the iPhone 5S is rumored to be largely the same as the iPhone 5, but Macotakara's sources say that it will sport a dual-LED flash and that the rear microphone hole will become circular instead of pill shaped, placed between the camera and the flash.

And all of you have been saying that this would be a modest update and not sport anything worth upgrading. If a dual-LED flash and a change from pill-shaped to circular-shaped microphone don't get your rocks off, I just don't know what's wrong with the world today.
Score: 22 Votes (Like | Disagree)

bchery21
I don't mind having color, just not these.
Score: 21 Votes (Like | Disagree)

wiz329
Those are the ugliest colors I've ever seen.
Score: 18 Votes (Like | Disagree)

macdude3
The colors are simply mockups. I am sure the actual colors will be closer to what we have already seen with the ipod nano and shuffle.
Score: 12 Votes (Like | Disagree)

ChazUK
Now with 2x the power of the iPhone 5 LED flash....
Score: 9 Votes (Like | Disagree)
Read All Comments