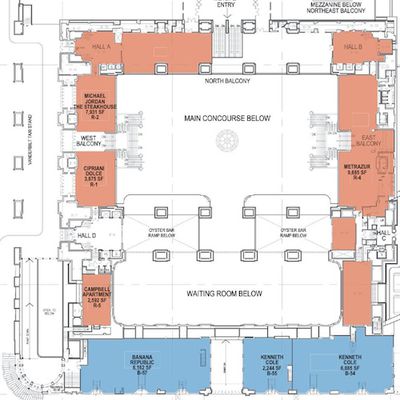 Grand Central Terminal leasing plan (PDF) with Metrazur on East Balcony at right
Earlier this year, reports surfaced claiming that Apple was pursuing a potential new retail store location in the historic Grand Central Terminal in Manhattan, a hub for both commuter and tourist activity. Claims had even suggested that the store could be the company's largest. But a few weeks later, word appeared claiming that Apple had backed out of its plans.

But according to The Wall Street Journal, Apple is indeed in discussions for a space in the terminal checking in at around 15,000 square feet, a fairly large store although not the company's largest.

The Metropolitan Transportation Authority is looking for new tenants for a marquee space in Grand Central Terminal, and computer giant Apple Inc. has expressed interest in putting a store there.

The agency is looking for a single renter for two adjacent balconies on the north and east sides of the terminal. It will issue a request for proposals Monday.

According to a spokesman for the Metropolitan Transportation Authority (MTA), the agency has spoken to Apple about the opening and is hoping that the company bids on the space.

The report hints that the MTA may be working specifically to find space for Apple, as successful restaurant Metrazur is one of the businesses closing to free up the space and the restaurant's owner suggests that he will be receiving a substantial buyout for agreeing to end his lease well before its 2019 expiration.

A new tenant would be required to pay Mr. Palmer a substantial sum of money to vacate his lease.

"It's an offer that's hard to refuse," said Mr. Palmer, who declined to put a number on it. "It's hard to compete with whatever that company might be that's taking the space."

Retail space in Grand Central Terminal is awarded through an open bidding process, meaning that Apple's official intent to bid on the space should become public as the selection process moves forward.

FloatingBones
I keep thinking about the flash crowd events that have been held in GCT.

If Apple gets a store on the concourse, perhaps Microsoft could fly in some retail employees to do the electric slide (//www.youtube.com/watch?v=TSAXEVXvNz8) on the main floor for the opening. :)
Score: 1 Votes (Like | Disagree)

Wasn't this news several months ago?

Yes but it was later reported to have been shelved.

dethmaShine
Apple should a open an Apple Store in India. :|

There's not a single Apple Store there. :(
Score: 1 Votes (Like | Disagree)

the8thark
Why do some new store rumours get front page news here when others only get 2nd page news? I don't understand.

Could it be that little stores get 2nd page and big flashy stores get front page?
No. Cause the Brisbane store will be very flashy, fancy and expensive. And it was on page 2.

Could it be the Mac-Rumors staff pick whatever new store rumours they want for the front page and not care if the other ones are important to some people?
Very possible. I've found no other evidence to disprove this.
Score: 1 Votes (Like | Disagree)

DJHonda84
It also turned out to be convenient having Madison Square Garden at NY Penn Station. Not worth it though since a great station was essentially destroyed in the process.

I know an Apple Store at a GCT balcony wouldn't have such extreme negative effect, but I can't help but be sensitive when it comes to such proposal. GCT was the place that launched historic landmark preservation movements across the country. Plus, anyone who knows the history of GCT knows that too much willingness to bring in tenants and commercial partnerships was in poor taste.
Score: 1 Votes (Like | Disagree)
Read All Comments