Belkin recently introduced the $99 Boost Charge Pro 2-in-1 Wireless Charger Stand with MagSafe, which joins the existing Belkin-branded 3-in-1 MagSafe Charger that came out earlier this year. 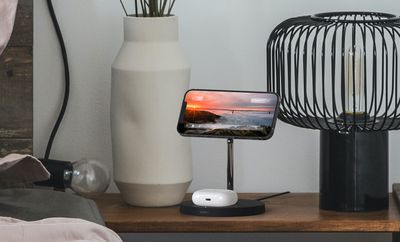 Belkin continues to be the only third-party accessory maker that offers Apple-approved MagSafe-compatible charging accessories that are able to charge Apple's iPhone 12 models at the maximum speeds, so there's not a lot of competition out there aside from Apple's own ‌MagSafe‌ Charger and ‌MagSafe‌ Duo.

Design wise, the 2-in-1 ‌MagSafe‌ Charger features a circular base with a chrome arm that houses a ‌MagSafe‌ charging puck that works with the ‌iPhone 12‌, 12 mini, 12 Pro, and 12 Pro Max. The charger's base is made from a plastic material and comes in either black or white. It's not the most high quality charger that I've used, but I think it looks fine on a desk or table, blending in well without standing out.

The ‌MagSafe‌ charging puck is similar to Apple's own ‌MagSafe‌ Charger in design, with that same soft rubber feel, and underneath, the charger has silicone pads to keep it in place on a desk. At the bottom of the base, there's a built-in Qi-based wireless charger that's meant to be used for the AirPods. There's a small hollow where the AirPods or AirPods Pro fit, and positioning the AirPods case within this hollow ensures that it's in the proper position for charging.

Even though the Qi charger at the base is designed for AirPods, it also works with other iPhones and smartphones that support Qi-based charging. The hollow is bigger and wider than the hollow Belkin added for the 3-in-1 charger, but it still works for iPhones of all sizes. This base charger is limited to 5W though, so it's not going to charge anything at high speeds.

The main ‌MagSafe‌ charging puck is identical to Apple's charging options and it charges the ‌iPhone 12‌, 12 Pro, and 12 Pro Max at 15W. The iPhone 12 mini maxes out at 12W, which the 2-in-1 charger also accommodates. The 2-in-1 charger is weighted a bit, but you do need to use a grab and twist gesture to undock an iPhone without lifting the charger itself. I've had no problems with this, and just giving that small twist when pulling up keeps it on my desk where it belongs.

With Apple's ‌MagSafe‌ chargers you need to make sure you have the appropriate power adapter, which is not included, but there's no guesswork involved with the Boost Charge Pro 2-in-1 Wireless Charger Stand because it comes with a power adapter.

The circular base of the Belkin 2-in-1 ‌MagSafe‌ Charger doesn't take up too much room on a desk (it's about 5.3 inches at its widest point), which I appreciate, and the upright ‌MagSafe‌ charging arm can be used in either portrait or landscape mode. The charging arm is angled slightly to put the ‌iPhone‌ in an ideal position for watching videos, taking FaceTime calls, or glancing over to see the time at night.

The 2-in-1 ‌MagSafe‌ Charger comes in either black or white, and there's a small LED light on the base that lights up when the Qi-based charger is in use so you know if charging is happening. There's no need for a light for the ‌MagSafe‌ charging puck because the ‌iPhone‌ connects magnetically and automatically gets oriented in the right position.

You can use the ‌MagSafe‌ charger with a naked ‌iPhone‌ or with a MagSafe-compatible case, but because it's magnetic, it does not work with non-MagSafe cases or with non-iPhone 12 models because they don't have the necessary built-in magnets.

In my testing, Belkin's 2-in-1 ‌MagSafe‌ Charger charged my ‌iPhone 12‌ from dead to 62 percent in an hour while also charging the ‌AirPods Pro‌ at 5W, which is just about the same charging speed that I tend to get from a standard Apple ‌MagSafe‌ Charger. It should be noted, though, that charging with ‌MagSafe‌ is variable, both with this Belkin charger and Apple's standard charger.

In some tests I get around 60 percent battery life in an hour from dead, but in other tests, battery life can be closer to 70 percent, so your actual charging speeds may vary somewhat. What I can say, though, is that the Belkin charger seems to be charging right at the same speeds as a standard ‌MagSafe‌ Charger, even when charging another device too.

Apple's standard ‌MagSafe‌ Charger is $39, which means the 2-in-1 ‌MagSafe‌ Charger from Belkin is $60 more expensive. Not everyone is going to want to pay that price, but for those who are fully investing in the ‌MagSafe‌ product lineup, it could be worth the cost.

I prefer Belkin's upright charging options to the standard Apple ‌MagSafe‌ Charger because they're just more convenient to use. It's easier to grab an ‌iPhone‌ off a desk from the charging arm than it is to grab one from the flat charger, and there's also space for charging AirPods or another device with the Qi charging base. All-in-one charging options save space and require fewer cables, which is a bonus.

In the future there may be more ‌MagSafe‌ charging options to choose from, but right now you're only going to get the fastest speeds from Apple-approved accessories like the ‌MagSafe‌ Charger and Belkin's options. You can get a much cheaper magnetic charger from a third-party company, but those cheaper chargers are limited to 7.5W rather than 15W and aren't worth it for those who want the faster ‌MagSafe‌ charging speeds.

The Belkin 2-in-1 ‌MagSafe‌ Charger can bepurchased from the Apple website for $99.95.

anyjungleinguy
Is that vase dented?
Score: 7 Votes (Like | Disagree)

eh i dunno, belkin is usually pretty reliable and this does look pretty neat. id give it a shot at $60-$75
Score: 5 Votes (Like | Disagree)

dukee101
I have the Belkin 3-in-1 MagSafe charging stand and can confirm it is a fantastic piece of charging hardware. I can't recommend it enough. Extra points for the super-cool floating effect of an iPhone on a vertical MagSafe puck.
Score: 3 Votes (Like | Disagree)

That is true. I wouldn't touch the Duo $150 either.
Score: 3 Votes (Like | Disagree)
Read All Comments