With the release of iOS 16.2, iPadOS 16.2, and tvOS 16.2, Apple is introducing Apple Music Sing, a new Karaoke experience for ‌Apple Music‌ subscribers that lets users sing along to their favorite songs by adjusting the volume of the vocals in tracks. 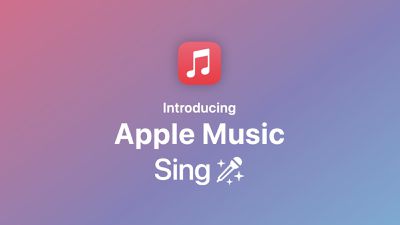 Available on iPhone, iPad, and Apple TV 4K (2022), ‌Apple Music‌ Sing works with ‌Apple Music‌'s real-time lyrics feature, and gives you control over a song's vocal levels. This means you can sing along with the original artist vocals or turn the vocals down and take the lead.

When there's background vocals in a song, the vocal lines sung simultaneously can animate independently from the main vocals to make it easier for you to follow. And if there's a duet or more singers, multiple vocals show on opposite sides of the screen to make them easier to sing along to.

Apple hasn't stated exactly which songs will get the ‌Apple Music‌ Sing feature, only that it will launch with support for "tens of millions of songs."

How to Use Apple Music Sing on iPhone and iPad

When you no longer want to sing along to the music, simply tap the Sing button again to turn off the feature.

As part of the new feature ‌Apple Music‌‌ had debuted over 50 new playlists focused on "all of the epic songs, duets, choruses, and anthems that have been compelling people all around the world to sing."