Burst Mode refers to when the camera on your iPhone captures a series of photos in rapid succession, at a rate of ten frames per second. It's a great way to shoot an action scene or an unexpected event, since you're always more likely to end up with the picture you were aiming for.

Apple has changed the way Burst Mode works in its redesigned Camera app for iPhone 11 and iPhone 11 Pro devices. On older iPhones and on iPads, you simply tap and hold the shutter button at the bottom of the Camera interface for the duration of the scene that you're trying to capture.

However, on the ‌iPhone 11‌ series you have to press the shutter button and drag it towards the square displaying the last image you shot. The shutter will stretch elastically under your finger as you do. 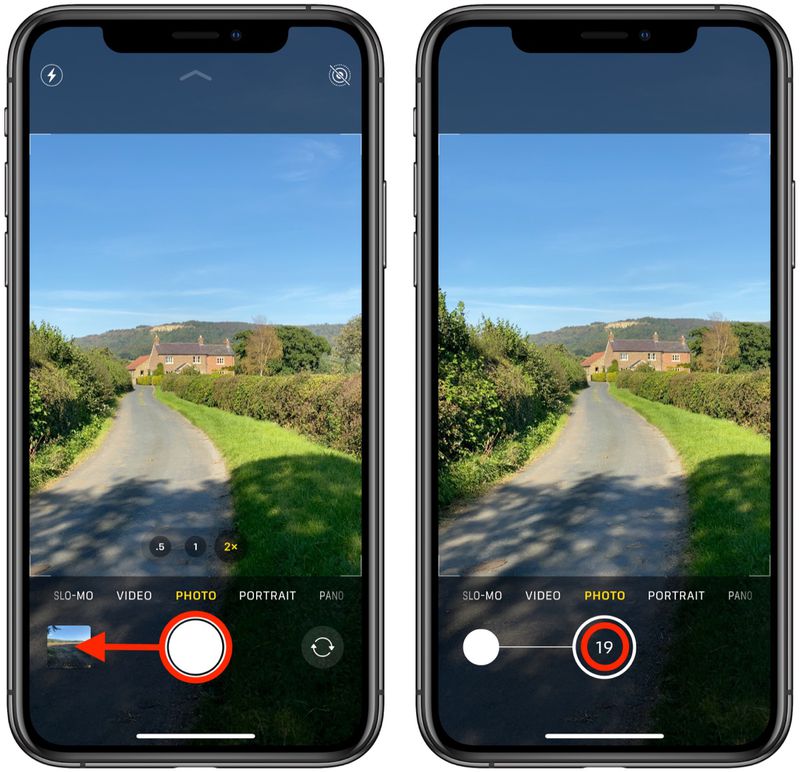 Notice that the counter increases in the shutter's original position for as long as you hold it down. This indicates how many shots are being captured in the current burst. Simply take your finger off the shutter when you want to end the burst of shots.

When you take a series of burst photos, they automatically appear in the Photos app under the Album name Bursts. You'll also find them in your main Photo Library. To learn how to view and select the best of your Burst photos in the ‌Photos‌ app, click here.

Needlessly complex. One of the most useful features of the camera made harder to use. Especially hard to use if trying to take burst selfies.


Well worth the trade off of having the ability to now hold down the shutter to start capturing video immediately; I’m sure that is more of a common want while snapping pics than to snap bursts.... by at least several orders of magnitude.
Rating: 11 Votes

err404
Since iOS started letting you change the key frame for Live Photos, I have stopped taking bursts. I have more flexibility with a Live Photo or two than a bunch of still shots. Yes, the burst is a hair better in quality if I shift the frame, but if I’m taking an action shot, I want that video anyway.
Rating: 8 Votes

So would you rather they never give us new features?

One persons feature is another’s turd pile. New burst gesture is horrible. They require delicate sliding and holding in a fixed position at a time when a user is about to photographic action. Delicate and gentle with action. Makes no sense from ergonomic. Slide to the side is terrible when used on a multi-purpose button. Press hard enough, but not too hard, now slide and hold. A perfect sequence of events to ensure you miss the action burst. This will be polarizing for sure.

And it’s not a feature. Both video and burst mode existed for many iterations of the OS. this is a change in how users initiate the action. Those who liked it as it was will almost undoubtedly dislike the change.

speaking of annoyances, the new keyboard requiring press on space bar to move cursor is also lame. Also, when did we lose the magnifying glass when pressing to select text?
Rating: 5 Votes


So would you rather they never give us new features?
Rating: 5 Votes

dukebound85
Why is this not the same for non iPhone 11? Seems like it should be a iOS design
Rating: 4 Votes

skillwill
For goodness sake, how is any normal user suppose to work that out? Most people will just think burst photos has gone. Along with deleting apps and updating apps.
Rating: 4 Votes

jimbobb24
Needlessly complex. One of the most useful features of the camera made harder to use. Especially hard to use if trying to take burst selfies.
Rating: 4 Votes

Most of my older relatives used to hold the shutter button for longer than needed to take a photo, resulting in bursts. They don't even know that there is a burst mode and always end up confused by the burst shutter sound. I don't see how this is worse. At least now people will know what's going on when they do a long press.

As for the copy/paste, it's not like feature discovery is hidden and you can't copy/paste with the context menu like before, and I think most users will still do it that way. The new gestures are for power users similar to how you can get hidden functions with the option button on the Mac.
Rating: 3 Votes