Though 2020 forced Apple to shift how it operates with many employees working from home for most of the year, Apple still managed to get a long list of new products out over the course of the last 12 months, refreshing most devices in its lineup and introducing new software.

Subscribe to the MacRumors YouTube channel for more videos.
In our latest YouTube video, we rounded up our top five products of 2020. Though there was a lot to choose from, there were several standouts like the M1 Macs, the iPhone 12 lineup, the iPad Air, the AirPods Max, and the Magic Keyboard for iPad Pro.

It may seem like forever ago, but back in March 2020, Apple debuted new iPad Pro models with updated camera technology that includes a LiDAR Scanner for the first time, and alongside the new ‌iPad Pro‌ models, Apple introduced the Magic Keyboard. 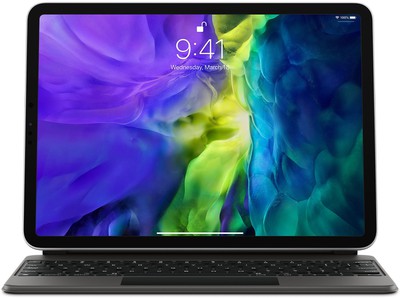 Apple previously had a Smart Keyboard for its iPads, but the Magic Keyboard is the best Apple-designed iPad keyboard to date. It has a scissor mechanism keyboard that's similar to the keyboard used for Apple's Macs, and for the first time, there's a trackpad.

The trackpad makes the ‌iPad‌ more laptop-like than ever, and Apple's iPads are also now compatible with mice. The Magic Keyboard also has a nifty float design that allows the display to be adjusted, and it even works well in a lap.

On the downside, it's priced starting at $300, which is incredibly expensive for a keyboard, and it doesn't fold back so you can't use it as a standard case when you don't need the keyboard.

Introduced in September 2020, the iPad Air is Apple's first device that has a fullscreen display and Touch ID, with a ‌Touch ID‌ fingerprint sensor built into the power button.

It also got a faster A14 chip before the A14 chip came to the ‌iPhone 12‌ (even though Apple ultimately released the ‌iPad Air‌ and the ‌iPhone 12‌ lineup at the same time), and it comes in a range of fresh colors that haven't been used before for an ‌iPad‌.

Compared to prior-generation ‌iPad Air‌ models, it got an ‌iPad Pro‌ style-display with slimmed down bezels, and with its A14 chip, ‌Touch ID‌, and new design, it's a solid deal at its $599 starting price.

Apple released four new iPhones this year, including a 5.4-inch iPhone mini, its smallest iPhone in many years designed for those who are fans of smaller devices, and the 6.7-inch iPhone 12 Pro Max, the largest ‌iPhone‌ to date.

All of the new iPhones feature a fresh ‌iPad‌ Pro-style design with squared off edges that mark a departure from the rounded edges we've seen in the ‌iPhone‌ lineup since the ‌iPhone‌ 6.

The iPhones all feature OLED displays even at the low end, and have A14 chips that are incredibly fast. They all have great cameras, but the iPhone 12 Pro Max has the highest-end camera setup, though both Pro models feature the same LiDAR Scanner first introduced in the ‌iPad Pro‌.

‌iPhone 12‌ models are also equipped with a ring of magnets inside that makes them compatible with a new technology called MagSafe, which is used for attaching chargers and magnetic accessories. With ‌MagSafe‌, iPhones are able to charge wirelessly at up to 15W, an improvement over the prior 7.5W charging maximum.

At WWDC in June, Apple confirmed that it was working on its own Apple silicon Arm-based chips, and in November, the first Apple silicon Macs were unveiled with "M1" chips. The ‌M1‌ Macs are, without a doubt, the most exciting new products that Apple has come out with in the Mac lineup in years.

Prior to launch, no one knew quite what to expect from the ‌M1‌ Macs, but Apple surprised everyone with downright incredible performance. When it comes to single-core CPU speeds, the ‌M1‌ Macs beat out all other Macs on the market, and in multi-core performance, they're on par with some of Apple's higher-end desktop machines.

Apple put its ‌M1‌ chip in the MacBook Air, 13-inch MacBook Pro, and Mac mini, and despite the speed gains introduced with these chips, these are the low-end Macs, with even more powerful chips expected for the 16-inch MacBook Pro, iMac, and other machines in 2021.

We weren't expecting the AirPods Max until 2021, but Apple introduced them as a December surprise. The ‌AirPods Max‌ are Apple's first Apple-branded over-ear headphones, and they turned out to be more expensive than anyone expected at $549.

The ‌AirPods Max‌ feature aluminum ear cups, mesh ear cushions, and a mesh headband, and though they're heavier than many other over-ear headphone options on the market because of the premium build, most people have found them to be comfortable.

‌AirPods Max‌ have all of the features that you expect from AirPods like quick pairing, fast device switching, and great range, plus Active Noise Cancellation, Adaptive EQ, and Spatial Audio. They sound great, as they should for $549, and battery life is decent at 20 hours.

The one real downside is the Smart Case, which has a curious design, offers no protection, and is generally seen as one of the worst cases included with a set of premium headphones.

What's on your list of top five Apple products of 2020? Let us know in the comments.

In 2021, we're expecting many more new devices, including additional (and more powerful) ‌M1‌ Macs, AirTags, an Apple TV, new software, and the iPhone 13 lineup. You can keep an eye on what's rumored to be launching in our Upcoming Apple Products guide, and we'll have an in-depth rundown later this week.

iPhone 12 Wins! hands down. No company, NOTHING can stop Apple respectively.

Erm, nope, M1 Macs took the honor.
Those blow away this year's iPhones.

The M1 Macs are by far the best products Apple released this year, only to get better next year(s).
Score: 22 Votes (Like | Disagree)

Relentless Power
The AirPods Max seams to be a bit premature to add it to the ‘top five best gifts’, when they’ve only been available like two weeks, so I don’t think consumers have had enough time to have their hands on this product to consider to be one of the best gifts just because they released and are a new product. Also, most consumers probably won’t experience the AirPods Max, simply because of the price point.
Score: 19 Votes (Like | Disagree)

AppleTO
Um, three of the five should be the M1 Macs alone, in my opinion. They are the real deal this year.
Score: 17 Votes (Like | Disagree)

Um, three of the five should be the M1 Macs alone, in my opinion. They are the real deal this year.

Realityck
M1 Macs were probably the most significant introduction Apple has offered in several years. This sets up 2021 as a year to watch what comes next.
Score: 15 Votes (Like | Disagree)

The AirPods Max seams to be a bit premature to add it to the ‘top five best gifts’, when they’ve only been available like two weeks, so I don’t think consumers have had enough time to have their hands on this product to consider to be one of the best gifts just because they released and are a new product. Also, most consumers probably won’t experience the AirPods Max, simply because of the price point.

Lots of professionals have given the AirPods Max glowing reviews though. And I know I'd be pretty happy if I received them as a gift!
Score: 11 Votes (Like | Disagree)
Read All Comments

What to Expect From Apple in 2021: New Apple Silicon Macs, iPhone 13, AirTags and More

Thursday December 31, 2020 7:00 am PST by Juli Clover
We're expecting 2021 to be an exciting year for Apple thanks to a renewed focus on the Mac. Apple debuted the first Macs with Apple silicon chip in late 2020, and Apple's M1 chips turned out to be unexpectedly powerful, leaving us looking forward to what's next. New iMacs and MacBook Pro models are rumored for 2021, with even better Apple silicon chips in the works. We can also count on new...
Read Full Article • 231 comments

Thursday April 29, 2021 1:58 am PDT by Hartley Charlton
AirTag is Apple's newest product line, a small round disc used to track items using the Find My app. Yet Apple is not the first to offer item trackers of this kind. Tile has been making Bluetooth item trackers for almost a decade and is now AirTag's main competitor. As the two leading item trackers share a number of key features, it may not be immediately obvious which is better for your...
Read Full Article • 87 comments

Wednesday April 21, 2021 5:39 am PDT by Hartley Charlton
The redesigned iMac with the M1 chip is available in three different base configurations that users can upgrade with Build-to-Order options for their specific needs. The new 24-inch iMac starts at $1,299, but it can reach $2,628 through Build-to-Order options. There are three standard configuration 24-inch iMac models available from Apple: $1,299 - Apple M1 chip with 8-Core CPU and...
Read Full Article • 363 comments