The holidays are clearly over, with the Apple rumor mill back into full swing as we hit the midpoint of January. This week saw an array of both near-term and longer-term rumors ranging from Apple's mixed-reality headset, Apple silicon Mac Pro, iPhone 15, and iOS 17 later this year to new technology potentially coming to Apple devices over the next several years. 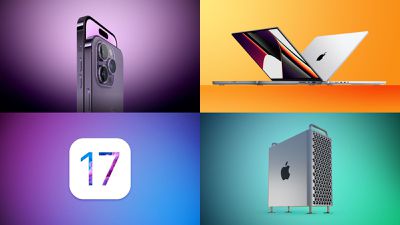 We covered a lot of the latest rumors in this week's episode of The MacRumors Show, so make sure to tune in for more there after you read on below for an overview!

It was a very busy time for Apple product rumors this week, starting with Bloomberg's Mark Gurman corroborating that iPhone 15 Pro models will feature a titanium frame, compared to a stainless steel frame currently. Titanium is also used for the Apple Watch Ultra.

Gurman added that the Dynamic Island will be available on all four iPhone 15 models launching later this year, as display industry analyst Ross Young claimed last year. Currently, the feature is exclusive to the iPhone 14 Pro and the iPhone 14 Pro Max.

Despite years of resistance, Apple is working on adding touchscreens to future Macs, according to Gurman. His report claimed that a new MacBook Pro with an OLED display could be the first Mac with support for touch input like an iPhone or iPad.

Apple has repeatedly dismissed the idea of a touchscreen Mac over the years, so this would be a major reversal in philosophy for the company if it moves forward with these plans.

iOS 17 Rumored to Have 'Fewer Major Changes Than Originally Planned'

While we are still around five months away from Apple unveiling iOS 17 at WWDC in June, a report this week claimed that the software update may have "fewer major changes than originally planned."

The report said that Apple's focus on the "xrOS" operating system for its upcoming AR/VR headset has drawn away resources from the iPhone's software. As of now, here is is everything that we know so far about iOS 17.

Apple's 'Reality Pro' Headset Said to Debut Before WWDC, Ship in the Fall

Apple's long-awaited AR/VR headset is expected to be announced this spring and become available to purchase later in the year. Rumors suggest the headset could be named "Reality Pro."

Concept render by Ian Zelbo based on purported leaked information
In the meantime, more references to "xrOS" and "Reality OS" were discovered in the upcoming Apple Devices app for Windows. Apple is expected to provide more details about the headset's operating system at WWDC.


New Mac Pro With M2 Ultra Chip Might Launch This Spring Alongside macOS 13.3

The long-awaited Mac Pro with Apple silicon could be announced this spring, with the computer's launch potentially tied to macOS 13.3.

The new Mac Pro is expected to feature Apple's new M2 Ultra chip, but a higher-end "M2 Extreme" chip was reportedly canceled. The high-end desktop tower will apparently have the same design as the 2019 model, but lack user-upgradeable RAM this time around.

Apple reportedly plans to fully design and develop its own displays for devices in house, starting with a microLED display for a new version of the Apple Watch Ultra in 2024. The displays would still be manufactured by an outside supplier, with LG reportedly on board.

While the Apple Watch Ultra is expected to transition away from OLED technology, another rumor this week indicated that MacBooks will start switching to OLED next year.

You don’t carry an iPhone /smartphone?
Why not just use WiFi hotspot?
cellular in laptop is very uncommon.
Score: 2 Votes (Like | Disagree)

Col4bin
So in other words, a whole bunch of iterative yawn.
Score: 2 Votes (Like | Disagree)

anthogag
will a new Mac Pro look like the current Mac Pro? At the very least shrink it to 2/3 the current size because it has the new M2 chip.
Score: 1 Votes (Like | Disagree)

Chaparral02
Give the macbook cellular support and then I maybe interested in buying one
As a macbook without internet access is pretty much useless to me
Score: 1 Votes (Like | Disagree)

Solomani
I soooo lusted after the TAM (20th Anniversary Mac). It even had a TV tuner, and a built in radio! I think microwave oven was also a lesser-known feature.
Score: 1 Votes (Like | Disagree)
Read All Comments