5 New Features and Changes Rumored for the 2023 HomePod

Later this year, Apple is expected to reintroduce a new full-sized HomePod, a successor to the original smart speaker which was discontinued almost two years ago. 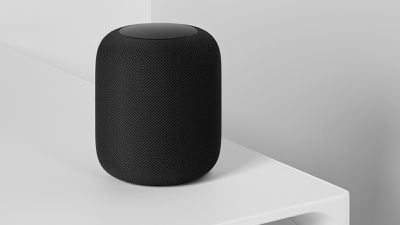 Apple reportedly discontinued the ‌HomePod‌ in March 2021 due to lackluster sales and a lack of features compared to the speakers offered by Amazon and Google. The ‌HomePod‌ lineup remains part of Apple's portfolio thanks to the smaller HomePod mini, which Apple announced in 2020.

The ‌HomePod mini‌, in its smaller form factor and cheaper $99 price point, has been a bigger success than the original ‌HomePod‌. In 2023, Apple is widely expected to reintroduce the full-sized ‌HomePod‌ to its lineup with several new features. Below, we outline five new features and changes we expect from the upcoming ‌HomePod‌.

The original ‌HomePod‌ featured an A8 chip, which helped power music playback, Siri, and more. The upcoming ‌HomePod‌, according to Bloomberg's Mark Gurman, will feature an updated S8 chip from the latest Apple Watch models.

The U1 Ultra Wideband chip, in the future, could also allow for other experiences, such as close-range data transfer, improved AR experiences, and the ability to track a user's exact location within their home.

The original ‌HomePod‌ and the ‌HomePod mini‌ feature a backlit touch interface at their top. The interface is small and doesn't show images or text but instead glows different colors to indicate different statuses or when ‌Siri‌ is invoked.

For the upcoming ‌HomePod‌, Apple is expected to make the touch area even larger, according to a recent report by Gurman. It's unclear if the larger area will allow for richer information or expanded functionality.

When Apple first announced the ‌HomePod‌, it was priced at $349, a higher price point than competing smart speakers on the market. Apple eventually dropped the price to $299 in hopes of sparking sales.

Even at $299, users were still put off by its high price and ‌Siri‌'s shortcomings. With the upcoming model, Apple is expected to drop the price even further, according to several reports. For comparison, Amazon's Echo Studio, which has a similar overall footprint compared to the full-sized ‌HomePod‌, is priced at $199 and has direct integration with several services, including Apple Music, Spotify, Samsung's Smart Things, and more.

The A8 chip powered the original full-sized ‌HomePod‌, which provided adequate performance to power different ‌HomePod‌ features, such as spatial awareness, ‌Siri‌, and more. In recent years, however, users have found that the original ‌HomePod‌ struggles with certain tasks, sometimes making it difficult to use certain features.

Thanks to the S8 chip in the upcoming ‌HomePod‌, users will be able to better use new software features, such as improved ‌Siri‌ capabilities, faster ‌Siri‌ voice recognition for multiple members of a household, and more.

bingeciren
Give me a BT and AUX input then I'll buy it.
Score: 27 Votes (Like | Disagree)

Will Co
One word. Siri. Fix that first, or everything else is a waste of time.
Score: 22 Votes (Like | Disagree)

Bawstun
#4 should be #1, since that is the primary reason the product failed.
Score: 20 Votes (Like | Disagree)

Macropanda
The price may help a little but that's it. It needs lots more...

Siri that actually works instead of saying "hang on... I'm having trouble doing that right now"
Third party app integration.
More/easier third party music services.
Ability to read Apples own audio books from a voice command instead of Airplaying from another device.
Ability to stream from Music app on a Mac via Home Sharing.
Drop in like the Echo can.
Ability to use purchased music in home automations.
Sound recognition that can trigger an automation like playing white noise when it hears a baby crying (Seriously how is this in a iPhone but not a HomePod????).
Score: 20 Votes (Like | Disagree)

BohemianDances
Listing “faster software features” as something to look forward to is infuriating. I have 4 of the original HomePods and they used to work flawlessly. Now every update manages to slow them down more and Siri sometimes can’t respond to the simplest command even when Wi-Fi and my pronunciation are completely fine.

I don’t know if I should be updating anymore, hoping for fixes, or if they’re just planning to slowly brick these amazing devices in preparation for a new release.
Score: 14 Votes (Like | Disagree)

The Game 161
still not worth spending big money when siri is still so bad compared to google assistant. got to admit my two homepod mini's and big homepod aren't really being used. Anything of importance I will just ask either my google homes or google mini's.
Score: 12 Votes (Like | Disagree)
Read All Comments