We're probably about six weeks away from the unveiling of the iPhone 14 lineup and Apple is continuing to polish the iOS 16 update that will be released alongside the new hardware, so we're seeing a number of tweaks as it moves through the beta testing period. 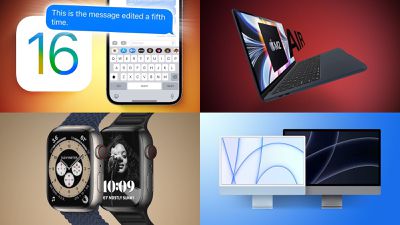 This week also saw some rumors about the rugged "Apple Watch Pro" planned for launch later this year, as well as some of the prototypes Apple has been testing out for a redesigned larger iMac, so read on for all the details on these stories and more!

Everything New in iOS 16 Beta 4 For Lock Screen, iMessage, and More

Apple this week released the fourth developer beta of iOS 16 with a handful of new features and changes for the iPhone. Apple also released a corresponding second public beta of iOS 16.

The latest beta contains a handful of updates to iMessage editing, Mail app, CarPlay, Lock screen notification settings, and more, so be sure to check out our recap of everything new in iOS 16 beta 4.

Apple is currently in the middle of a two-year transition from Intel processors to its own custom-designed chips in Macs, and now Apple has completely ditched Intel with its latest MacBook Air.

Teardowns of the new MacBook Air with the M2 chip earlier this month revealed that Apple has replaced the last Intel-supplied component in that Mac — Thunderbolt port controllers — with its own custom solution.

The larger rugged Apple Watch Series 8 model expected to launch later this year is rumored to feature a durable titanium casing, raising questions about the future of the current Apple Watch Edition.

Google last week launched the Pixel 6a, a $449 budget smartphone that's designed to compete with more affordable smartphones like Apple's latest iPhone SE, which starts at $429.

We picked up a Pixel 6a to see how it measures up to the third-generation iPhone SE in terms of design, performance, and camera technology.

While the iPhone still uses the Lightning connector for now, Apple has been transitioning many of its devices to USB-C in recent years.

Apple now offers USB-C ports on every new Mac that it sells, along with all iPad models except the entry-level model, the Studio Display and Pro Display XDR, and a handful of other products.

What's next? Here are five more Apple products rumored to switch to USB-C.

Rumors suggest that Apple still plans to release a new larger iMac or iMac Pro, but not until 2023 or 2024, so it seems like the prototype models with M1 series of chips from last year are unlikely to be released to the public.

HowardEv
When will Apple release the new form factor M2 Mini? Praying for a pocket-size form factor, with all day battery and passive cooling and a screen like a phone, but with unthrottled full speed M2 and (several) USB C ports like a desktop. And wireless connection to display or laptop.
Score: 5 Votes (Like | Disagree)

The iOS/iPadOS beta 4 notes as with MacOS beta 4 notes showed a large number of fixes in beta 4. In other words the 3 week wait was worth it.
Score: 5 Votes (Like | Disagree)

Username-already-in-use
Sorry but MacRumors Forum taught me that we can’t consider Apple Watch Pro to be ‘pro’ until it runs Final Cut Pro.
Score: 3 Votes (Like | Disagree)

SFjohn
I like the idea that the new rugged Apple Watch will become the new Edition model for the Series 8 lineup.
Score: 1 Votes (Like | Disagree)

Yoda Mann
Apple Watch Pro is a stupid name. Gee, I'm an expert at telling time... AND knowing what time it is.
Score: 1 Votes (Like | Disagree)

rsdotscot
I long for the day they put a 10 bit display on the iMac, just for Lightroom work, but I can't see them doing it without a serious price bump.
Score: 1 Votes (Like | Disagree)
Read All Comments