The fifth-generation iPad Air is expected to arrive in less than a week with a number of notable features and improvements, so prospective customers should now hold off on buying an ‌iPad Air‌ until the new model arrives. 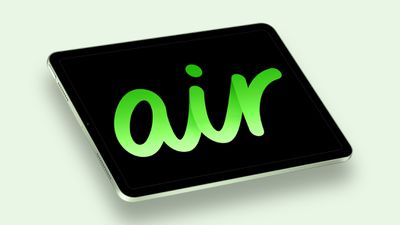 Following the ‌iPhone 12‌ lineup in 2020, the cellular iPad Pro and ‌iPad mini‌ models gained 5G connectivity last year, leaving the ‌iPad Air‌ as the next iPad to get the next-generation high-speed network connection. Like the latest ‌iPad mini‌, the updated ‌iPad Air‌ is expected to feature a new modem that will enable it to connect to 5G networks. The chip in the ‌iPad mini‌ is limited to sub-6GHz 5G networks rather than the fastest mmWave 5G networks, so it is possible that the ‌iPad Air‌ could be limited in the same way.

Sub-6GHz 5G is the more widely available version of 5G that can be found in urban, suburban, and rural areas across the United States and other countries, while faster mmWave 5G is more limited in availability and in range. AT&T and Verizon have recently expanded their 5G networks with C-band spectrum that improves the availability of mmWave networks in the U.S., so it is possible Apple will take this into account when updating the ‌iPad Air‌.

Rumors suggest the ‌iPad Air‌ will adopt a 12-megapixel Ultra Wide front camera and support Center Stage, a feature first introduced on the ‌iPad Pro‌ before it came to the ‌iPad mini‌ and entry-level ‌iPad‌ toward the end of last year.

Center Stage, which is available on all of Apple's other ‌iPad‌ models from 2021, is a feature designed to keep users perfectly framed during video calls. The wide-angle front-facing camera can show more of a user's surroundings, while the A15 Bionic chip works to keep the subject central, even when there is movement. If more than one person is participating in the call, Center Stage will zoom out to keep everyone in frame.

The ‌iPad Air‌'s rear camera is expected to continue to feature a single-lens setup, but Apple is likely to add a quad-LED True Tone flash like the ‌iPad mini‌ and ‌iPad Pro‌. Other camera improvements are also a possibility, but there have been no specific rumors about camera hardware upgrades.

The new ‌iPad Air‌ is said to feature the same design as the current model from 2020, with an all-screen design and squared-off edges, a 10.9-inch Liquid Retina display, Touch ID built into the Power Button, and a USB-C port.

The device's potential color options are as yet unknown. The ‌sixth-generation ‌iPad mini‌‌ comes in a range of color options, including Pink, Starlight, Purple, and Space Gray. Other than Space Gray, these were all-new shades for 2021.

The current ‌‌iPad Air‌‌, on the other hand, is available in Silver, Space Gray, Rose Gold, Green, and Sky Blue. While Apple's system of colors is currently somewhat fragmented, it seems reasonable to speculate that the next-generation ‌‌iPad Air‌‌ could get a range of color options to broadly match the ‌‌iPhone 13‌‌, Apple Watch Series 7, and ‌‌iPad mini‌‌.

The new ‌iPad Air‌ is currently believed to be in production and Apple has filed the device in regulatory databases. Citing sources in China, Mac Otakara claimed that the new ‌iPad Air‌ could be announced alongside the third-generation iPhone SE in spring 2022.

Bloomberg's Mark Gurman, who often reveals accurate insights into Apple's plans, reported early last month that Apple was planning to host an event on Tuesday, March 8 to announce updated versions of the iPhone SE and the ‌iPad Air‌.

On Wednesday, March 2, Apple sent out invites for an event on March 8 with the tagline "Peek Performance." Similar to the other Apple events that have taken place over the past two years, the "Peek Performance" event will be streamed digitally only, rather than be held with an in-person audience. The event is expected to at least include the announcement of updated versions of the ‌iPhone SE‌ and the ‌iPad Air‌, so the launch of the new mid-range Apple tablet is now believed to be imminent.

Sunday March 20, 2022 6:36 am PDT by Hartley Charlton
Some fifth-generation iPad Air users are complaining about a purported downgrade in build quality, according to posts on social media. The complaints claim that the iPad Air has a noticeably thinner aluminum enclosure, resulting in creaking, a hollow sensation in the hand, and light pressure on the back of the device warping the display. A thread on Reddit (via iMore) contains a large number ...
Read Full Article • 414 comments

Wednesday September 15, 2021 3:10 am PDT by Tim Hardwick
Yesterday during Apple's virtual "California streaming" event, Apple debuted a refreshed ninth-generation entry-level iPad ($329) and a redesigned sixth-generation iPad mini ($499). Like the iPad Pro, both devices include a 12-megapixel Ultra Wide front camera enabling Center Stage, which makes the iPad Air ($579) the only tablet in Apple's lineup that lacks this feature. Center Stage is a...
Read Full Article • 43 comments