It was another surprise Apple product launch week, with Apple opening up sales of the new Magic Keyboard with built-in Touch ID on a standalone basis after its debut earlier this year as part of the new 24-inch iMac. Now, users of other M1 Macs can get their hands on the accessory for easy fingerprint authentication.

Subscribe to the MacRumors YouTube channel for more videos.
Apple this week also released some new high-end graphics options for the Mac Pro, while the company brought back a dedicated "Store" section on its website. We also saw evidence of upcoming MacBook Pro and Apple Watch updates and got a preview of several upcoming child safety features that will be coming in updates to iOS, iPadOS, and macOS later this year, so check out our video above and read on below for details on these stories and more!

In late April, Apple introduced a new Magic Keyboard with a built-in Touch ID sensor for unlocking a Mac with a fingerprint. The keyboard was only available with the redesigned 24-inch iMac, but as of this week, the keyboard can be purchased separately for use with any Mac with an M1 chip, including the MacBook Air, 13-inch MacBook Pro, and Mac mini. 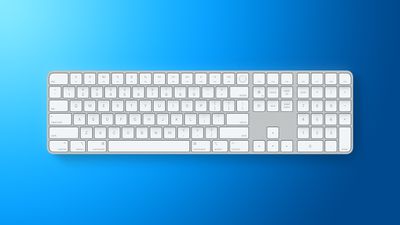 Apple has also started shipping the Magic Mouse and Magic Trackpad with braided USB-C to Lightning cables in the box, and the Magic Keyboard with Touch ID is available in an extended Numeric Keypad layout.

Apple this week previewed new child safety features that will be coming to the iPhone, iPad, and Mac with software updates later this year.

The upcoming features include a Communication Safety tool in the Messages app that warns children and their parents when receiving or sending sexually explicit photos, the ability for Apple to detect known Child Sexual Abuse Material (CSAM) images stored in iCloud Photos, and improved CSAM guidance from Siri/Spotlight Search.

This week saw Apple release new high-end AMD Radeon Pro W6000 series graphics modules for the 2019 Mac Pro. The new graphics options are available when configuring a new Mac Pro on Apple's online store, and the modules are also being sold on a standalone basis for installation in an existing Mac Pro.

Apple has shared support documents walking through the many different display setups that can be used with the GPUs and how to use AMD's Infinity Fabric Link technology for increased performance and faster data transfer between the modules.

The fall season is just around the corner and, as usual, that means we can expect several new Apple products to launch in the coming months.

In advance, Apple has filed a lengthy list of unreleased Mac and Apple Watch models in the Eurasian Economic Commission's regulatory database. These listings will likely end up being the Apple Watch Series 7 models and new Apple silicon 14-inch and 16-inch MacBook Pro models.

iPhone 13 models are widely rumored to feature Wi-Fi 6E, and to better understand what this means, MacRumors sat down for an exclusive interview with Kevin Robinson, senior vice president of marketing for the Wi-Fi Alliance.

At a surface level, Wi-Fi 6E offers the features and capabilities of Wi-Fi 6, including higher performance, lower latency, and faster data rates, extended into the 6 GHz band. However, there are a lot more nuances, so the interview is a worthwhile read ahead of the release of iPhone 13 models.

A video of a seemingly functional AirPower prototype has been shared on Twitter by Apple device collector Giulio Zompetti, in what appears to be a first-of-its-kind look at the elusive charger in action.

What's old is new again! Apple this week reintroduced a dedicated online "Store" section on its website, allowing customers to browse products in a centralized place. Apple had removed the section in 2015, but a pandemic-driven surge in online shopping likely prompted the company to reverse its decision.

The page looks very similar to the Apple Store app on mobile devices and also contains information about refurbished products, trade-ins, and other helpful shopping resources.

bumpylumpy
By far, the TOP story of this week is Apple's decision to automatically scan photos on your iPhone for illegal content. That should be the story up top; by comparison, all of the rest of these stories feel really insignificant.
Score: 49 Votes (Like | Disagree)

grilledcheesesandwich
C'mon MacRumors, if sites like yours don't hold Apple accountable, who will? What a disappointing week for the brand.
Score: 32 Votes (Like | Disagree)

bumpylumpy
I think ultimately this will be seen as the beginning of the end of Apple. Not because of this one feature really, but because of just how badly this was handled. We could blame it on the fact that since everyone is working from home and that teams that would have normally bumped into each other in the hall might have discovered this was a bad idea and put stop to it, or it could just be that there are now so many voices at Apple that things are increasingly designed by committee and bureacratic, and like all large unwieldy organizations, it becomes very hard to keep focused and have a coherent mission.

I suspect we will find out that there are opposing forces inside Apple; many who feel the same way and are outraged at what has happened, along with others who feel this is their life's work and are very hurt that nobody wants to protect the children as much as they do.

I've seen this happen in many large companies and it usually is a sign that things are out of control and we're just seeing the tip of the iceberg.

Thankfully we have been given a warning with ample time - we now have over a year with iOS 14 which can give many of us time to plan our exit if we choose. I, for one will be delaying my fall phone purchase to investigate what other options I have, including continuing to use my iPhone but only for the absolute minimum features only it can provide.

This will give me the motivation I need to re-examine the tech I use and it's actually exciting to know that other people feel the same way, and perhaps this will spur some new companies and innovation in the open source space that would not have occurred otherwise.

Sometimes the best ideas and companies come about from the blunders of others; I suspect Linux would have never taken off so quickly had it not been for Microsoft's errors in the 1990s.
Score: 24 Votes (Like | Disagree)

TheYayAreaLiving ?
Dear MacRumors: Can we move this under the top #1 story, please?

Apple dropped the bomb on us this week. It’s a joke. I really hope Apple reverses it’s decision.

Bottomline: Do not upgrade to iOS 15. Say good bye to privacy and your personal data.

Silver Idaten
The top story of the week is the Magic Keyboard with Touch ID? What a joke of a site.
Score: 19 Votes (Like | Disagree)

Agreed. This week marks the death of the privacy brand. But at least they are honest about it.
However I wonder if they are not honest with other things.

Well, given that this feature has been in development for many years (according to the memo the posted the night the news broke), and it was not even mentioned ONCE at WWDC where they rundown all of the features of iOS 15, they definitely were trying to keep this one quiet.
Score: 19 Votes (Like | Disagree)
Read All Comments