Reese Witherspoon's media company "Hello Sunshine" recently courted various buyers, and while Apple was one of parties interested in buying Hello Sunshine, the Cupertino company did not end up going through with the purchase. 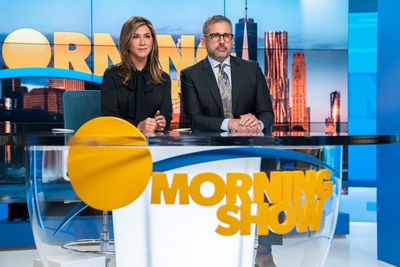 Hello Sunshine was valued at around $900 million thanks to its involvement in popular series like The Morning Show," "Big Little Lies," and "Little Fires Everywhere," and it would have marked Apple's largest media purchase to date had a deal been established.

Instead, Hello Sunshine is being purchased by an upcoming media venture run by two former Disney executives backed by Blackstone Group. According to The Wall Street Journal, the purchase was made as part of a plan to build an independent entertainment company.

There is no word on how much was paid for Hello Sunshine, but Reese Witherspoon and current CEO Sarah Harden will join the board of the new company and will continue to operate it.

Though Apple did not purchase Hello Sunshine, the two companies will continue to work together. Hello Sunshine is responsible for "The Morning Show" and it is involved in multiple upcoming Apple TV+ projects including "Surface" starring Gugu Mbatha-Raw, "The Last Thing He Told Me" with Julia Roberts, and country music reality series "My Kind of Country."

Recent rumors have suggested that Apple is exploring other purchase opportunities and has expressed interest in film studio A24. A24 has developed hit movies like "Hereditary," "Moonlight," "Lady Bird," and "Midsommar," plus it already has a content deal with Apple.

A24 and Apple have partnered on "Mr. Corman" and "On the Rocks" along with and upcoming films "Sharper," "The Sky is Everywhere," "The Tragedy of Macbeth," "Bride," and more.

Apple is out of its depth in Hollywood. Save this comment- Apple TV will not exist in three years. Netflix will own it.

Gibberish. 112 Award wins froom 379 Nomintations. Their viewing numbers are really pretty good too. The worst thing is being able to find the ATV+ stuff on their own app.
Score: 20 Votes (Like | Disagree)

Hopefully the harbinger of Apple getting out of Hollywood soon.

Why… how exactly does It affect your life? You either watch stuff they produce or you ignore it.

and they have All been very good to outstanding.

Some misses - See and Mosqunto coast were Disappointing.

And really looking forward to:
Foundation
Score: 15 Votes (Like | Disagree)

Jack Neill
I too, also declined to purchase the organization. It just wasn't a good fit for my portfolio in this fiscal quarter.
Score: 13 Votes (Like | Disagree)

FishyFish
****, this sucks so much for Reese. Hopefully she will be ok!
Score: 11 Votes (Like | Disagree)

Apple is out of its depth in Hollywood. Save this comment- Apple TV will not exist in three years. Netflix will own it.

LOL. No.
Score: 11 Votes (Like | Disagree)
Read All Comments

Monday December 6, 2021 11:33 am PST by Juli Clover
With the iOS 15.1 update that launched in late October, Apple added SharePlay, a feature that's designed to let you do more over FaceTime. Using SharePlay, you can watch movies, listen to music, and use apps with friends and family, and we thought we'd give it a try to see how it works. Subscribe to the MacRumors YouTube channel for more videos. The first step with any SharePlay experience is ...
Read Full Article • 30 comments