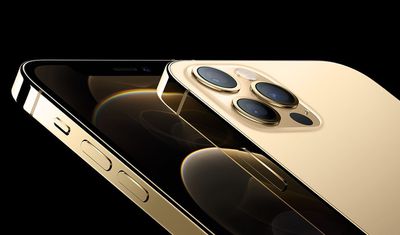 According to the report, the use of titanium alloy will be one of the biggest changes to the case design in the 2022 iPhone series, and Foxconn will be the exclusive manufacturer of the titanium frames for the high-end models.

If the report is accurate, the use of titanium in an ‌iPhone‌ would be a first for Apple. The company currently uses the material for some Apple Watch Series 6 models, and the physical Apple Card is made of titanium, but the latest iPhones are made of aluminum and stainless steel.

The material does have some drawbacks, though. Oil from fingerprints can be readily seen on bare titanium and titanium alloy surfaces, leaving unattractive marks on consumer devices. The hardness of titanium also makes it difficult to etch, which can make it less attractive.

However, Apple has been researching how it can overcome both of these issues. Recent patent filings reveal that Apple is looking at the use of thin oxide coatings for metal surfaces which can significantly reduce the appearance of fingerprints on devices. The company has also outlined a blasting, etching, and chemical process that can give titanium enclosures a high-gloss surface finish for a more attractive appearance.

Meanwhile, JP Morgan Chase's report also corroborates rumors that next year's ‌iPhone‌ will feature greater specification changes than the upcoming iPhone 13, suggesting that Apple is earmarking 2022 as an ‌iPhone‌ "supercycle," or a year in which dramatically more people than usual upgrade to the latest models.

The report corroborates other rumors that Apple does not plan to introduce a 5.4-inch ‌iPhone 14‌ mini, with the mini line ending after the ‌iPhone 13‌. According to analyst Ming-Chi Kuo, Apple will instead offer two 6.1-inch iPhones and two 6.7-inch iPhones, so both the standard ‌iPhone 14‌ and the iPhone 14 Pro will be available in those two size options.

The report also mentions the market rumor that Touch ID could return to the iPhone in some form, if not this year then next, either implemented in the side button or in the form of an in-display fingerprint sensor.

Other rumors suggest at least some 2022 iPhones will no longer have a notch, with Apple instead adopting a punch-hole design that's previously been used for some Android devices. For all the details on the rumors floating around for the ‌iPhone 14‌, check out the last section of our iPhone 13 guide.

subjonas
As a small phone lover, I feel like I’ve been slowly disappearing.

Titanium Chassis + No notch. This is a solid upgrade already.

This will make the iPhone even more exclusive and premium. Moving towards the right direction.

HeavenDynamic
yes, PLEASE. Titanium is so much better than stainless steel.
Score: 10 Votes (Like | Disagree)

AmazeSE
This is great news. Titanium alloys are as strong as steel and lighter too. Best of both worlds.

This is good news to people who find the current Pro phones heavy due to the stainless steel frame.
The 14 Pros will be much lighter and as strong or maybe even stronger than the current ones.
Score: 9 Votes (Like | Disagree)

Armada2
Gonna wait for the iPhone 15 instead
Score: 9 Votes (Like | Disagree)
Read All Comments