The third-generation AirPods will likely launch at the same event revealing Apple's upcoming iPhone 13 lineup, according to a report from DigiTimes, which makes the claim citing sources familiar with the matter. 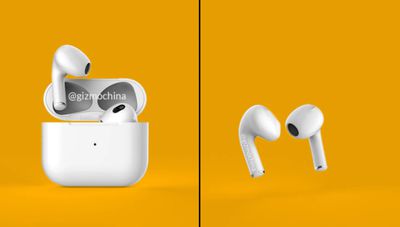 The report as a whole echoes previous reporting that production of the third-generation AirPods will kickstart in August, meaning a launch shortly after can be easily expected. DigiTimes states that shipments of certain components needed for the AirPods have already begun in "small volumes" and will be ramped up in the third and fourth quarters of the year.

The third-generation AirPods will be the first update to the standard AirPods since March of 2019, where it gained wireless charging support, "Hey Siri" support, and improved internals. Compared to the modest update in 2019, the upcoming AirPods are expected to feature an entirely new design that takes inspiration from the higher-end AirPods Pro.

Images claiming to be the upcoming AirPods 3 have shown a design in line with leaks and rumors. The images showcase the AirPods with a shorter stem and functionality for snap-in silicone earpieces. As for the AirPods case, the upcoming case will be wider compared to the previous generation, and more in parity with the ‌AirPods Pro‌ case.

Bloomberg journalist Mark Gurman recently stated he believes that an Apple event for the upcoming iPhones will occur in September. Due to the global health crisis, Apple last year held an event in October for the iPhone 12, but the company is likely on track to resume back to its September event traditions beginning this fall. Gurman has also stated that the third-generation AirPods will launch later this year.

Apple's AirPods have continued to grow and dominate the wireless earphone market, with the Cupertino tech giant estimated to have shipped nearly 110 million AirPods and Beats headphones in 2020, far exceeding any other maker. With the lack of a headphone shipping in the iPhone box, Apple may want to use its rumored September event to market the AirPods 3 alongside the new iPhones, fueling AirPods success for the remainder of 2021 and into 2022.

The updated AirPods may also prove vital for the AirPods line's future health, as Apple has reportedly asked its suppliers to lower production of its current AirPods due to lower-than-expected sales. Despite its dominance in the wireless headphone market, there is growing competition from other makers making similar wireless earbuds but at lower price points.

Further down the line, Apple is also working on the second generation of the ‌AirPods Pro‌, which may feature advanced health tracking and a design similar to the recently launched Beats Studio Buds. The new ‌AirPods Pro‌, however, shouldn't be expected until next year.

“The images showcase the AirPods with a shorter stem and functionality for snap-in silicone earpieces.”

Agree 100%: If these are going to phase out the regular AirPods, which I'm assuming considering how old their design is by now, then there's no way they're going to feature silicone tips.

If Apple wanted us all to use in-ears with silicone tips then they wouldn't have put out AirPods Gen 2 alongside AirPods Pro.

Apple knows there's a market for both and that some users genuinely cannot use one or the other because of how different ears and ear canals can be from one person to the next.

Also, not everyone wants ANC which is another reason that Apple needs a non-ANC, regular AirPods model in its line-up. Doing silicone tip AirPods without ANC and transparency mode doesn't make sense since AirPods are also supposed to be worn out and about without users being shut off completely.

There will be no silicone tips if this is indeed the third generation of non-Pro AirPods.
Score: 5 Votes (Like | Disagree)

TheYayAreaLiving ?
This is going to be an exciting fall. Can’t wait ?

September iPhone event is just going to be amazing.

Yeah, I agree with you 100% on this. My ears can't with the silicone/foam things that go into the ear canal.

My OG AirPods are on their way out after a long and useful life. C’mon AirPods 3.

Same. Although batteries on mine are not too catastrophic. But I am having a lot of connectivity issues and people complaining they can't hear me because of some sort of distorsion I guess. And many times when taking them out of the case only one pod connects forcing me to place them both back in the charging case and closing the lid and starting over.
Score: 3 Votes (Like | Disagree)

Serban55
wow Digitimes strikes again
whats next? apple watch will be at iphone event too?
Wow...come on..Ditimes stop saying what real leakers are saying...or stop being wrong when you try to be original like ipad mini with miniLED
Score: 2 Votes (Like | Disagree)

one more
“The images showcase the AirPods with a shorter stem and functionality for snap-in silicone earpieces.”

The snap-in silicone earpieces, if real, could alienate some AP1 & AP2 users, preferring a more convenient and less invasive design similar to Apple’s original EarPods. IMO, the success of AP is in their convenience, they are light, small and super easy to pop in. If we need to fiddle to get a good silicone fit, it just defies their purpose. Besides, if we look at these images and the case cut-outs, where would these silicone earpieces fit?
Score: 2 Votes (Like | Disagree)

I kinda hope they DON'T have these.

Never liked in-ear earphones anyways. Always been uncomfortable for me.

I agree. And that’s my point. I had to return the airpod pros due to them hurting my ears. As have many others including the dude working at apple who took care of my return. The standard AirPods fit my ears perfectly and actually create a partial seal so I get solid bass too.

Either way if the new ones have tips or don’t fit well I’ll be stocking up on one extra pairs of current gen to keep going for years to come. AirPods are my favorite apple product in many many years. Total game changer in just a few short years
Score: 2 Votes (Like | Disagree)
Read All Comments