A new version of Super Stickman Golf 3 is set to launch on Apple Arcade in the near future, according to an announcement made today by Noodlecake Studios. 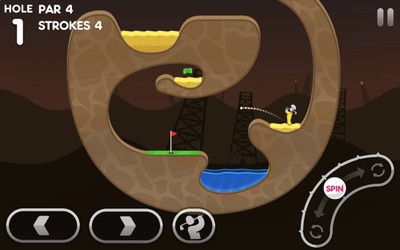 On ‌Apple Arcade‌, Super Stickman Golf 3+ includes an unlocked premium upgrade, an XP doubler and Last Shot indicator, all 48 courses from the original game, daily races and rewards, and unlimited turn based matches.

There are no in-app purchases or ads as this is an ‌Apple Arcade‌ title, and Noodlecake says there's a rebalanced Bux system for unlocking different hats that change the gameplay and various ball trails. There are both turn-based and real-time multiplayer modes, so players can compete with up to eight people.

Both of these titles are listed as coming soon and should be released in the near future.

Coming Soon to Apple Arcade: @Ultimate_Rivals: The Court Join superstars from across the world of sports in this fast-paced, action-packed game of extreme basketball. ⏰ Set a reminder: https://t.co/K1hcAcYdVn pic.twitter.com/iDr7J44MO5 — Apple Arcade (@AppleArcade) July 6, 2021

poematik13
Sucks how they're basically locking decent games behind an arcade subscription
Score: 7 Votes (Like | Disagree)

GermanSuplex
I've got to admit, some of the new games along with ad-free, updated versions of some classics (like Cut The Rope and Leo's Fortune) are making Apple Arcade a serious streaming platform. I don't think it competes with consoles just yet, but it doesn't need to. I think the games - like the two I mentioned - are best when they are tailored for touch controls instead of ported. Ported games have been hit or miss for me, largely depending on the control scheme.
Score: 5 Votes (Like | Disagree)

Well make sure you continue to let us know how you feel about it though....
Score: 5 Votes (Like | Disagree)

alex2792
This is absolutely mind blowing The Last of Us Part 2 has nothing on this masterpiece!
Score: 4 Votes (Like | Disagree)

Sucks how they're basically locking decent games behind an arcade subscription

Because the public as a whole pushed this terrible free to play garbage because apparently the average person is too damn cheap to spend a few bucks on a game but will spend $5 per day on Starbucks. So this is the alternative. People who have some common sense and want some quality mobile games are willing to pay a measly $5 PER MONTH……
Score: 3 Votes (Like | Disagree)
Read All Comments

Tuesday June 15, 2021 10:56 am PDT by Juli Clover
Apple in April began adding classic games to its Apple Arcade catalog, and today, Apple announced three new games that are coming in the near future: Angry Birds Reloaded, Doodle God Universe, and Alto's Odyssey: The Lost City. Apple announced the new games on Twitter today, and those interested in playing them when they launch on Apple Arcade can sign up to be notified. The three games will ...
Read Full Article • 53 comments

Friday July 23, 2021 8:59 am PDT by Joe Rossignol
The classic endless runner Jetpack Joyride from Halfbrick Studios is making a return today on the subscription-based Apple Arcade service. Over 750 million players have downloaded Jetpack Joyride across all gaming platforms, and Apple Arcade subscribers can now relive the fun with Jetpack Joyride+ for the iPhone and iPad. "Get ready for bullet-powered jetpacks, giant mechanical dragons,...
Read Full Article • 31 comments